Portrait Ramzan Kadyrov
The Idi Amin of the Caucasus?

Effective March 2, 2007, Chechnya has a new president who grew up amidst the extreme violence of a ten-year-long civil war and who is known today for his dubious economic and political machinations. By Marcus Bensmann

​​Ramzan Kadyrov keeps lions and tigers as house pets. A security troop under his command arouses fear and terror among the population. Kidnappings, torture and killings are everyday events in Chechnya. The archives of American and Russian human rights organizations such as "Human Rights Watch" and "Memorial" are overflowing with horrifying reports of lost lives. Ramzan Kadyrov himself has reputedly attended and ordered torture sessions.

Photographs and posters of the youthful Ramsan Kadyrow, with the face of a boxer partially covered by a red beard, can be seen on every street corner of the bullet-riddled city of Grozny. The local television stations feature hymns extolling the new, energetic leader of Chechnya.

"A leader must be feared"

Ramzan Kadyrov waves his arms while dancing a Chechen folk dance during the re-opening of Grozny's airport by way of signaling that this event is his doing. He cavalierly explains to Radio Free Europe where the money for reconstruction efforts is coming from: "How do we find the money? We talk with those who have money and we ask them to help with the reconstruction."

It is quite clear that no one who is approached like this can refuse a request from Kadyrov.

Yet this brawny man is fervently trying to put forth a better image. He invited American boxer Mike Tyson to Grozny, organized martial arts tournaments, and gave interviews to international journalists in which he blithely made statements such as "a leader must be feared." 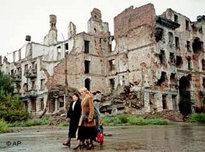 Thousands of Russian troops have occupied Grozny for a long time. But they have not brought peace, safety, or order to the civilians

​​The 30-year-old martial arts expert felt more at home as a teenager growing up in torture chambers and on battlefields than in school. He originally fought alongside his father Akhmad Kadyrov against Russian Federation troops in the first Chechen war.

And now, under the patronage of the Kremlin, he is en route to becoming the Idi Amin of the Caucasus. Under Putin Russia has been able to "Chechenize" the bloodshed in the southern provinces and to pit the local clans brutalized by the war against one another.

And it doesn't seem to bother anyone in Moscow that the young firebrand and new man about town in Chechnya has been openly flirting with the idea of introducing the sharia. And he is permitted to garner popular support by fulminating against Moscow.

He proudly boasts that he is the only one who can fund reconstruction, that Moscow is offering nothing, and that the federal power would steal Chechnya's oil.

Time and again Moscow enacts reconstruction measures for this ravaged country, but the money mostly gets filtered into a net of corruption. The main oil pipelines from Baku pass through Chechnya on their way to Russia, and the country has its own oil fields too.

The young new president has already reaped these riches for his own profit. And, as is befitting for a despot, Kadyrov is a very generous leader known for spontaneously tucking wads of money into the pockets of his allies.

It seems that as long as he remains obedient to Russian President Vladimir Putin – so far, he has been – he can have his way in Chechnya.

The role of Akhmad Kadyrov

One of the most atrocious warlords in the brutal Chechen conflict: Akhmed Kadyrov, 1951 - 2004

​​His father Akhmed Kadyrov, acting in his capacity as mufti, declared the war of independence against Russian troops a holy war. According to the Russian journalist Anna Politowskaja, who was murdered in October, the elder Kadyrov had the distinction of being one of the most atrocious warlords in the brutal Chechen conflict.

When Politowskaja was killed in October 2006, Kadyrow was considered one of the possible contractors in her death warrant. He denies the charge, claiming he would never kill a woman. But he adds that she should have stayed at home and taken care of her household.

But together with his son, Akhmad Kadyrov changed sides in the second Chechen war and has supported the Russian Federation troops ever since. The second war began in 1999 with the incursion of the equally heinous and dubious warlord Shamil Bassajev into Dagestan.

The purported reason for the Kadyrov clan's change of sides was the growing influence of Wahabite currents in Chechnya's war of independence. And in fact the bloody civil war against the Russian army did attract many adventurers from Arabic countries – the best known of them being Khatab, who fought alongside Shamil Bassajev with his long, flowing hair.

Arriving along with the mostly Arab legionnaires were funds from questionable foundations, and a whole network of training camps for extremists sprouted up across Chechnya.

The mufti felt his influence was waning and changed sides in response. His son still curses the "Wahabite devils who wanted to make Arabs and Afghans out of the Chechens." In contrast to his father, however, Ramzan did not receive a religious education.

As a reward for his allegiance, Russian President Putin named the mufti leader of the Caucasus Republic and let him be elected president by the Chechens in a dubious election.

​​The father's reign did not last long. On May 9, 2004, during a ceremony for a military parade in honor of the Allied victory in the Second World War, a bomb exploded under the honorary podium at the stadium, killing the Kremlin's main man in Chechnya.

The son used his father's short presidency and his ruthless militia to orchestrate kidnappings, killings and torture, thereby clearing the family's political path of all possible rivals and preparing to follow in his father's footsteps. But because of his young age, he was initially denied the presidency.

The young warrior had to watch as Alu Alkhanov, another Moscow loyalist, was formally given the presidency. But by summer 2006 Alkhanov's impotence was already apparent. His colleagues and bodyguards had either disappeared or met a violent death.

The ambitious Kadyrov son was said to have played a role in this. When he turned 30, with the blessing of Putin he forced the unpopular Alkhanov to resign and was elected president by the Chechen puppet parliament.

In contrast to the public spectacle of deaths in Iraq, the despotic acts in Chechnya are no longer visible in the media. And in the European capitals a certain degree of relief is tangible, as if the Chechnya problem had been resolved.

It would seem as if "the war is over," but the fact is: the violence has continued. Only time will tell if Ramzan Kadyrov feels strong enough to confront Moscow again, or if he will share the violent fate of his father.

North Caucasus Conflict
A Nation of Russians?
The Russian government's recent push to enforce unity from above on the multi-national federation is likely to meet with resistance, due primarily to ongoing conflicts in the Muslim-dominated North Caucasus region. Michael Ludwig reports

END_OF_DOCUMENT_TOKEN_TO_BE_REPLACED
Social media
and networks
Subscribe to our
newsletter