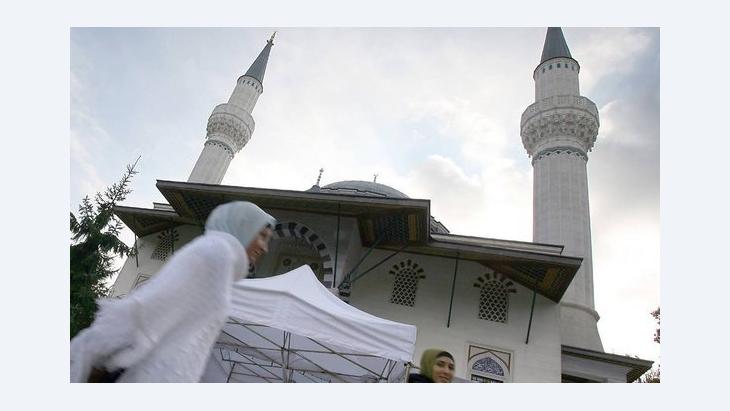 Germany's religious communities are standing shoulder to shoulder following the sending of obscure, threatening letters to mosques and the Jewish Community of Berlin. Background information by Jan Kuhlmann

The letter was sent mid-February. An eight-page missive to the Sehitlik Mosque in the Berlin district of Neukölln, a large building immediately adjacent to the disused Tempelhof airport. Offensive, abusive letters are unfortunately nothing new. But there was something different about this racist pamphlet. Its contents were reminiscent of the crazed ideas of the Norwegian mass killer Anders Behring Breivik.

The letter also contained an unambiguous threat: All Muslims should leave Germany by 1 August at the latest – otherwise acts of violence after Day X could not be ruled out. It ended on a cynical note: "Yours sincerely – the leaders of the Reich Movement".

The chairman of the Mosque association, Ender Cetin, is not talking about fear at this stage. "We won't be frightened by them," he says. "But it certainly leaves us feeling uncomfortable." And he is not alone. 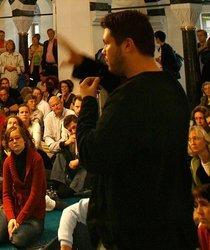 "We are all German." – Going on the offensive together with Berlin's Jewish Community: Ender Cetin, Chairman of the Sehitlik Mosque in Neukölln

​​The letter has in the meantime been sent to recipients in Lower Saxony, Hamburg and Baden Württemberg. A spokeswoman for the intelligence authorities in Stuttgart, Baden Württemberg's capital, said it had appeared on numerous occasions: "We know these letters," she added, saying she would not say to whom they had been sent. But it is known that the Jewish community in Berlin also received the letter.

Right-wing extremist propaganda on the Internet

The threats are being issued by a Nazi group calling itself "Die Reichsbewegung – Neue Gemeinschaft von Philosophen" (The Reich Movement – New Association of Philosophers). Their website is on a US server, putting it out of the reach of German investigators. Tracks also lead to New Zealand. In the letter, the group expresses its commitment to the "resurrection of the German Reich", as "part of the Holy Atlantic Reich of European Peoples". The website stirs up hatred against Jews and denies the Holocaust.

Investigators do not know much about the group, and describe it as a "backroom debating club". The intelligence agency in Berlin assumes that it is isolated within the right-wing community. "Fortunately, the letter is finding pretty much no resonance there," says an employee.

The contents of the letter are so obscure that one could easily imagine its author or authors to be crazed cranks. Those in charge at the Sehitlik Mosque also initially considered just throwing the letter in the bin. But the series of murders perpetrated by the terrorist cell National Socialist Underground (NSU) and the attacks carried out by Breivik have shown what rightwing extremists are capable of.

This was the reason why the Sehitlik Mosque did eventually decide to take the letter to the police. Security authorities are alarmed, and officials have launched an investigation into what they see as an incitement to hatred and violence. Berlin Chief of Police Margarete Koppers perceives a "low threshold" to violence among elements of the rightwing scene. "We do have to factor in the deployment of weapons," she said this week at a panel discussion called on the issue at the old Tempelhof airport restaurant.

How best to deal with letters such as these? Anyone publishing them gives attention to the authors and encourages potential imitators. Nevertheless, the Sehitlik Mosque and Berlin's Jewish community has decided to go on the offensive. 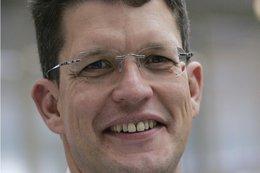 Resisting the climate of fear: Wolfgang Klose, Chairman of the Berlin Diocesan Council

​​The panel debate on the issue was held together with representatives of Germany's Protestant and Catholic churches. "This letter is intended to spread a climate of fear," said Wolfgang Klose, Chairman of the Berlin Diocesan Council. "And we must resist it."

Protestant minister Elisabeth Kruse also expressed support for the publication of the letter. Her Genezareth (Galilee) congregation, also in the district of Neukölln, sent a letter of solidarity to the Sehitlik Mosque. "That's what being neighbours is all about," said Kruse. It is important, she went on, to put up one's hand and say: "We've heard about it and we're on your side." Kruse said the threats affect everyone: "They trample underfoot values and rights that we pursue and enjoy. At that point we're not separable into "them" and "us" categories," said Kruse.

The various religious communities are generally moving closer together. The panel discussion was the first event organized by an association known as the "Treffpunkt Religion und Gesellschaft" (Meeting Place for Religion and Society). Its establishment has been long in the planning, and should be completed in May.

The association draws together the two major churches, the Turkish-Islamic Union for Religious Affairs (Ditib) and the Jewish Community of Berlin. Their general aim is to encourage greater dialogue between religion and society – a matter concerning many worshippers in a city not famed for its religious affiliations.

But the association also aims to address the issues of racism and resentment as a way of countering extremism more effectively, says Maya Zehden from the Berlin Jewish Community. For her, the most important point is that: "We are all German. Germans with a Jewish background, Germans with a Muslim background, and Germans with a Christian background. And as German democrats, we must stand together."

For the targets of the letter, experiencing the solidarity of other religious communities has sent out an important signal. Speaking at the panel discussion Pinar Cetin, a member of the Sehitlik Mosque congregation and fellow regional chairman of Ditib, said that actions of the NSU, debates tinged with anti-Muslim sentiment and general resentment had seriously undermined the trust of young Muslims in Germany: "There is discrimination happening on a daily basis that we just don't talk about," she added.

She had a clear message for the authors of the letter: "None of us are planning to emigrate by August. Whoever wrote that letter, they can forget it."

Home
Print
Newsletter
More on this topic
Aftermath of the Attacks in Norway: Isolate the Intellectual Incendiaries!Fresh Dispute over Islam: Why the German Media are Courting the Anti-Islam MovementQantara Dossier: Dialogue between Religions
Related Topics
Dialogue of Religions, Integration in Germany, Islam in Europe, Islam in Germany, Islamophobia
All Topics

Algeria‘s regime is again cracking down on anti-fracking activists and the unemployed in the country‘s south. Yet EU countries remain keen to scale up their energy cooperation ... END_OF_DOCUMENT_TOKEN_TO_BE_REPLACED

Bachtyar Ali sends the hero of his latest novel – "Mein Onkel den der Wind mitnahm" – literally flying. Jamshid is so thin after his years as a political prisoner that a gust of ... END_OF_DOCUMENT_TOKEN_TO_BE_REPLACED

For a century, the Kurds and other minorities in Turkey have been subject to state repression. With his dissertation "The Kurdish Question in Turkey", political analyst Ismail ... END_OF_DOCUMENT_TOKEN_TO_BE_REPLACED

Anti-Semitic motifs have no place at Germany’s documenta art show or anywhere else in the world, stresses Meron Mendel, director of the Anne Frank Educational Centre in Frankfurt ... END_OF_DOCUMENT_TOKEN_TO_BE_REPLACED

A new exhibition, "Syria – Against Forgetting", at Cologne’s Rautenstrauch-Joest-Museum focuses on Syria's artistic and cultural heritage and pays tribute to the country before ... END_OF_DOCUMENT_TOKEN_TO_BE_REPLACED

Madrid's about-face on the Western Sahara conflict has enraged Algeria. Trade relations have been frozen unilaterally and a cut in gas supplies to Europe could be in the pipeline ... END_OF_DOCUMENT_TOKEN_TO_BE_REPLACED
Author:
Jan Kuhlmann
Date:
Mail:
Send via mail

END_OF_DOCUMENT_TOKEN_TO_BE_REPLACED
Social media
and networks
Subscribe to our
newsletter