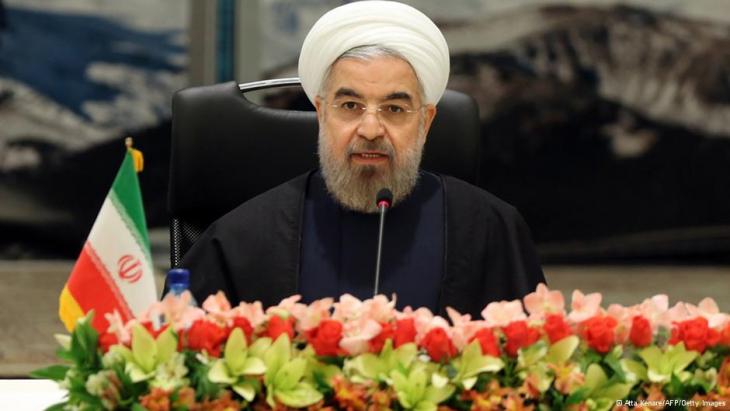 Hardliners in the Islamic Republic of Iran are intent on showing the president where the boundaries of his ambitious domestic reform agenda lie. By Marcus Michaelsen

It was an unusually harsh tone for Hassan Rouhani to strike: "Why is it always just a handful of illiterates speaking out? Why do we not hear anything from our professors and intellectuals?" The normally diplomatic president recently called on representatives of Iranian universities to take a public stand on the problems of the nation.

This is Rouhani's response to growing criticism of his moderate course from the conservative camp. Following their defeat at the last election, hardliners are using the ongoing nuclear talks as a reason to attack the government. They feel that the agreement reached between Iran and the UN veto powers in Geneva last November betrays the interests of the country. Iran is being forced to make ever greater concessions while sanctions remain in place, they claim.

The hardliners favour a foreign policy of "resistance", namely that the position of the Islamic Republic should be consolidated in response to an offensive challenge from the West. Implementation of this doctrine is evident, for example, in the support given to the Lebanese Hezbollah militia or the direct involvement of the Revolutionary Guard in the Syria conflict.

The cautious rapprochement to the US proposed by Rouhani and Foreign Minister Mohammad Javad Zarif is undermining the ideological foundations of the system. The government is betraying the martyrs of the revolution, sputtered the ultra-conservative Ayatollah Mesbah-Yazdi.

In view of these entrenched positions, Supreme Leader Ali Khamenei felt compelled to urge both sides to moderate their stances. By doing this, Khamenei, who often had to intervene directly in the day-to-day business of politics during the turbulent tenure of the previous president, Mahmoud Ahmadinejad, is stepping back into his preferred role: by mediating between the different factions he is able to consolidate his own position. 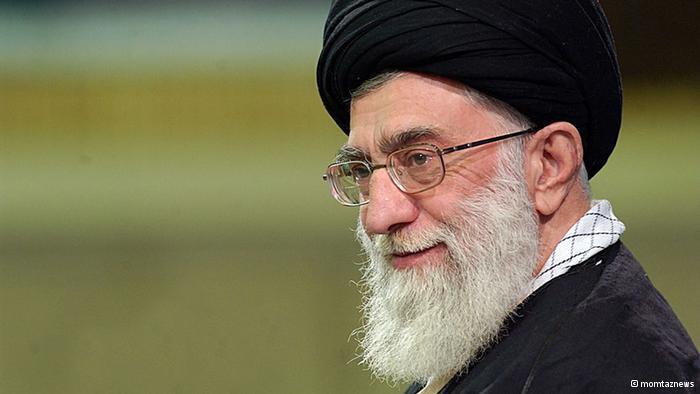 The Ayatollah playing his preferred role: according to Marcus Michaelsen, Iran's Supreme Leader Ayatollah Ali Khamenei (picture here) has so far supported the new government under Hassan Rouhani, but has adopted his usual policy of keeping all doors open by simultaneously emphasising his mistrust of the West. By mediating between the hardliners and the reformers in this way, he is once again strengthening his own position

The supreme leader has thus far supported the government. At the same time, however, he continues to keep his options open by accentuating his mistrust of the West. Before the resumption of nuclear talks in Vienna, Khamenei declared that the foreign ministry and government should continue their work, even if he himself did not believe in a positive outcome.

Rouhani has had direct and personal experience of the fact that the hardliners are prepared to go to any lengths to influence public opinion. A recent live interview with the president was delayed by more than an hour, apparently because the director of the state television channel found the chosen presenters to be too moderate. The march to mark the anniversary of the revolution also provided the hardliners with a welcome stage: alongside the usual anti-US slogans, flyers were also distributed denouncing the Geneva agreement.

The president, on the other hand, used the anniversary to lobby for his discourse on national unity and reconciliation. The government had expressly invited representatives of the reform movement to participate in the demonstration. In recent years, they had avoided the event, believing it to be a vehicle for the hardliners. Nevertheless, two leading reformist politicians – Mohsen Mirdamadi and Behzad Nabavi – heeded the president's call.

But support by proponents of reform remains the new government's Achilles' heel. Rouhani would have stood little chance of becoming president without the votes of the modern middle class. But he has so far not been able to fulfil his promises of greater freedom and civil rights. As far as the media are concerned, it is true that some red lines have been softened, and a handful of political prisoners have been released, but the justice and security apparatus are doing everything to obfuscate the impression of greater openness.

For example, as political scientist Sadegh Zibakalam recently discovered, criticism of the nuclear programme is still taboo. He had questioned the benefits of the programme and called instead for more investment in the economy, health and education. Zibakalam was subsequently subpoenaed by the public prosecutor and only allowed to leave after paying a fine. 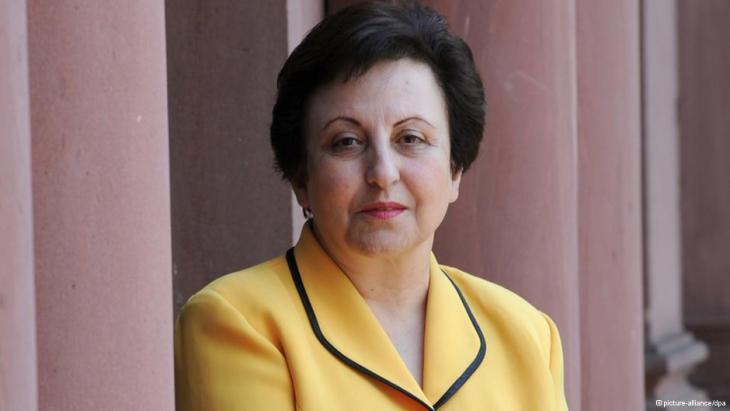 Iranian human rights activist and Nobel Peace Prize laureate Shirin Ebadi (pictured here) has strongly criticised President Hassan Rouhani's human rights record, saying that there has been a dramatic increase in executions since he took office and that the government has lied about the release of political prisoners

Culture Minister Ali Jannati, who holds a key post for the nation's domestic opening process, has also been warned several times by the hardliners. After he announced greater freedom for the media, filmmakers and artists, Jannati was summoned by parliament for questioning.

In an interview with the television channel Al-Jazeera, the minister was cautiously critical of the judiciary, saying it was not yet acting in harmony with the new government and its proposed changes. He was promptly and harshly criticised by Chief Public Prosecutor Gholam Hossein Mohseni-Ejei, who warned against any interference in the work of the judiciary.

In no-mans land between the fronts

Mohseni-Ejei has also sharply rebuffed demands for the release of Mir Hossein Mousavi and Mehdi Karroubi. The instigators of the "unrest" (as the 2009 protest movement is known in official rhetoric) must first repent their crimes, he says. Although Rouhani had announced his intention to end the house arrest of the opposition leaders, which has now lasted for more than three years, this would now appear to be unlikely. Moreover, there are still dozens of dissidents in detention.

This appears to be a new manifestation of a dilemma familiar from the era of reformist President Khatami: measures proposed or implemented by a moderate government can be subverted at any time by insistent forces in the key bastions of the regime. As Rouhani has closely linked the success of his government to finding a solution to the nuclear conflict and improving the nation's economic predicament, he will to make some sacrifices in the enforcement of cultural and political freedoms.

This puts the president between the frontlines: on the one side are the supporters of reform, whose public support he needs and demands, but who are increasingly frustrated by the fact that domestic policy changes are not forthcoming. On the other side are the hardliners, who are wary of all change and will sabotage it if necessary.

Fariduddin Attar’s "The Conference of the Birds", one of the seminal works of Islamic mysticism, has recently been published in sumptuously illustrated German translation. It ... END_OF_DOCUMENT_TOKEN_TO_BE_REPLACED

In "Iran. Die Freiheit ist weiblich", journalist Golineh Atai describes the dogged resistance of courageous Iranian women against the Islamic Republic and the mullahs who have ... END_OF_DOCUMENT_TOKEN_TO_BE_REPLACED

The violent death of 22-year-old Mahsa Amini has achieved something the entire opposition has failed to do during the 43-year rule of the ayatollahs in Iran: almost the entire ... END_OF_DOCUMENT_TOKEN_TO_BE_REPLACED

Like Christianity, Europe's history is one of migration. Both have strong roots in the Orient and in cultures thousands of years old. Cultural historian Bernhard Braun invites us ... END_OF_DOCUMENT_TOKEN_TO_BE_REPLACED

A lot is happening in Syria’s Sweida Governorate – foreign intervention there is unprecedented both in terms of scale and number of actors – yet Damascus remains the dominant ... END_OF_DOCUMENT_TOKEN_TO_BE_REPLACED

Russia is leaving no stone unturned in its attempts to make the Islamic Republic an ally in the war against Ukraine. Fortunately for Vladimir Putin, the mullahs in Tehran are ... END_OF_DOCUMENT_TOKEN_TO_BE_REPLACED

I wish you good luck, President Rouhani. You have a rough row to hoe trying to keep your hardliners in line and building up Iran's economic base. Mr. Obama has the same problem with his Congress and even some of those that want to set up some sanctions to use later are not usually "hardliners", they are in this case. Keep going steadily with your actions as assigned in the Treaty and try to work with the Ayatollah in keeping things calm. No one needs a nuclear weapon ( including the US) and no one needs a military incursion that will do nothing for anyone, esp. Iran. The Ayatollah may be cynical regarding the outcome but don't let that cynicism take Iran from its goal of becoming part of the economic axis with the West, Russia, China etc. I may be in California but I definitely am hoping Iran becomes one with the world. It should never have left.

END_OF_DOCUMENT_TOKEN_TO_BE_REPLACED
Social media
and networks
Subscribe to our
newsletter