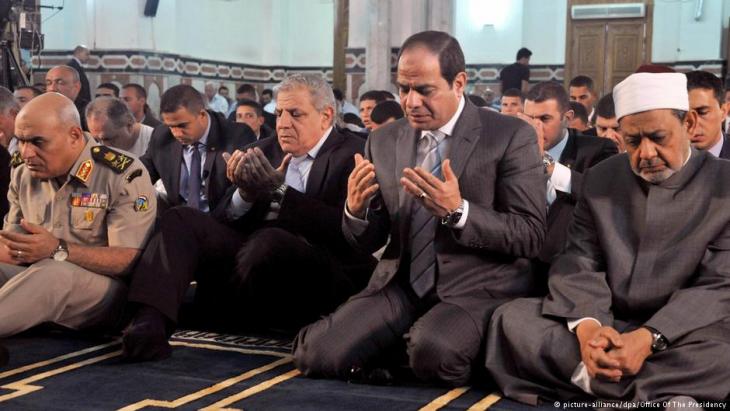 An arcane dispute between Egyptʹs president and Al-Azhar over how much society is threatened by debating the authenticity of hadiths and their role in Islamic law is really about moral leadership in society. By Nathan J. Brown and Cassia Bardos

Both Ahmad al-Tayeb, the grand imam of Al-Azhar and President Abdul Fattah al-Sisi delivered formal addresses to dignitaries assembled for the prophetʹs birthday on 19 November.

Tayeb denounced those who questioned the authenticity of hadiths, since hadiths form the basis of much of Islamic law. While the Koran takes precedence, the holy bookʹs clearly legal statements are far fewer and sometimes more general in nature than hadiths, as Tayeb pointed out.

It was not surprising that he did so, since hadiths comprise the sunnah, or the practice of the prophet and the early community that gives Sunni Islam its name. There was little with which a pious Muslim Egyptian respecting the moral and religious leadership of Al-Azhar could disagree.

But when Sisi rose, he added extemporaneous comments to his prepared text, indirectly but unambiguously rebuking Tayeb. He did not question the authenticity of hadiths (this would be a bridge he showed no interest in crossing), but he dismissed the significance of the problem.

Picking a fight with the Grand Imam

The real threat, he averred, came not from questioning hadiths, but instead from perverse interpretations of religion. "The current dilemma worldwide is not about following the sunnah or not. It is about the wrong understanding of our religion," Sisi said, before asking: "Are those calling for the abandonment of the sunnah more wrongful than those who misinterpret our religion?" 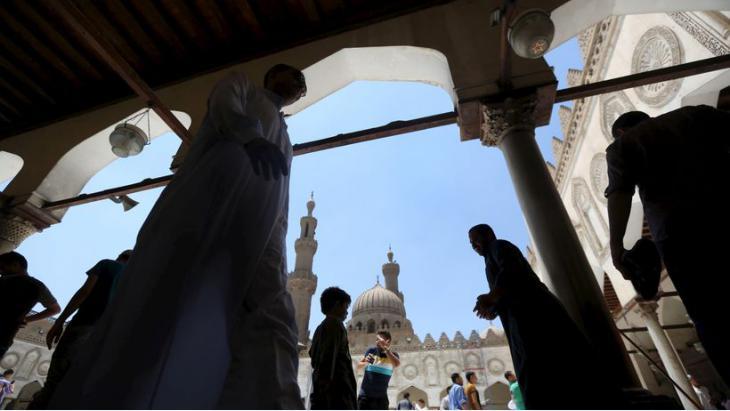 More than just power politics: religion is very much at issue and the ostensible dispute – over the significance of challenging hadiths – is actually quite relevant. Sisiʹs focus on perceived security threats means he is looking for support to combat radical ideas, an effort he feels is hindered by the fetters and distractions of bookishness

What was going on? Why did the president feel compelled to do battle with a figure who poses as someone above politics on an issue that would appear abstruse to most political leaders? In one sense, the dispute is political. It has burst out previously on public occasions as the presidency strives to consolidate its hold over the Egyptian state and society.

The Egyptian state today – however wide its reach – has come to be dominated by the presidency and security institutions. Previously autonomous state actors, such as the administrative courts, have found their wings clipped. In society, almost all leading political figures have seen their voices and influence eliminated.

As Michele Dunne commented, "most Egyptians who had played important roles in public life between the mid-2000s and the 2013 coup [are] either in prison or in exile abroad in what [amounts] to a massive brain drain." The regime has also reined in trade unions and professional associations, other past sources of independent activism in Egypt.

But Al-Azhar and the religious sector has retained something of an independent voice. This is true in a formal sense, as the institutionʹs leaders have blunted efforts by the state to reverse the autonomy Al-Azhar won in 2011. However, Al-Azharʹs autonomy relies on more than chains of command.

Tayeb also has constituencies willing to support him. Millions of graduates of Al-Azharʹs educational institutions, members of Sufi brotherhoods and southern Egyptian tribes linked to the grand imam and members of the religious public alienated by the regimeʹs 2013 violence – all will rally not to challenge the regime but to defend Tayebʹs integrity and position.

Sisi’s mismanagement has plunged the country into crisis. Both political and economic reform is needed to save it, writes Abdelrahman Mansour END_OF_DOCUMENT_TOKEN_TO_BE_REPLACED

The devaluation of the Egyptian pound combined with rising food prices is taking its toll on Egypt. More and more people are slipping into poverty. Karim El-Gawhary reports from ... END_OF_DOCUMENT_TOKEN_TO_BE_REPLACED

Egyptian Sufis have been on the defensive against the country's Islamists for decades. Meanwhile, interest in mysticism is growing among the young members of Cairo’s middle and ... END_OF_DOCUMENT_TOKEN_TO_BE_REPLACED

Abortions are illegal in Egypt unless they are necessary to save a married woman's life. But that doesn't stop local women from having one. Egyptian society needs to acknowledge ... END_OF_DOCUMENT_TOKEN_TO_BE_REPLACED

Food prices doubled, salaries halved, banks restricting withdrawals: Egyptians now have the same problems as the Lebanese. But if things get worse here, the fallout will be far ... END_OF_DOCUMENT_TOKEN_TO_BE_REPLACED

END_OF_DOCUMENT_TOKEN_TO_BE_REPLACED
Social media
and networks
Subscribe to our
newsletter