Low Point of an Electoral Farce

Following his controversial re-election, the Afghan president Hamid Karsai can expect energetic resistance from the opposition under Abdullah Abdullah. Andreas Zumach finds it easy to understand why Abdullah decided not to take part in the run-off 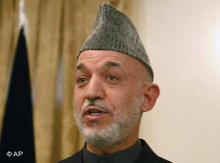 Dubious candidate: although there has been an increasing chorus of critical voices – even in Washington – over the last few years, the West has held on to Hamid Karsai as if there were no possible alternative

​​ The run-off vote in the Afghan presidential election, which was originally planned for November 7th, has been cancelled, and the incumbent Hamid Karsai has been officially declared the winner of the manipulated first round of voting.

This decision of the Afghan election commission – which is nominally independent but in fact acts according to Karsai's will – brings this two-month electoral farce to a low point beyond which it is scarcely possible to sink.

The credibility of all the participants – the politicians in Kabul, the USA and its Western allies, as well as the UN – has most likely been irreparably destroyed in the eyes of the Afghan people.

That makes the chances of the US-led international Afghanistan mission being able to stabilise the country, shaken as it is by war, terror, the drug trade and corruption, even less likely now than it has ever been since the start of the mission in autumn 2001.

All power to warlords and tribal chiefs

In the last eight years, the West has shown alarming consistency in repeatedly narrowing its own possibilities for action in Afghanistan. 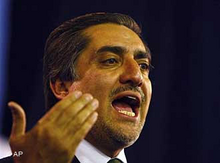 Abdullah Abdullah: "A government which has come to power as a result of an illegal decision will not be in a position to fulfil the expectations of the people!"

Power has always rested with local and regional tribal leaders and warlords. But even if it was true eight years ago that there was no alternative to such a centralist strategy, having taken that decision the West then went on to make every mistake they could have made.

With Karsai, they chose a representative of the Pashtun majority as president, without adequate consultation and involvement of the country's ethnic minorities.

Even today, the president has not yet won complete control of Kabul. Karsai's lack of commitment to stamping out corruption and the drug trade – and his own involvement in these basic evils of Afghan society – has been tolerated by the West for far too long.

And although critical voices could be increasingly heard over the last few years, even in Washington, the West has stuck with him as if there were no alternative.

The West remained quiet, not only about the election fraud on August 20th, but also about the fact that Karsai made deals with notorious warlords and drug barons during the election campaign as to the posts they might have in the government and the army if he should win.

The governments of the US and the other NATO countries involved in the Afghanistan war originally intended to declare Karsai the winner in early October. 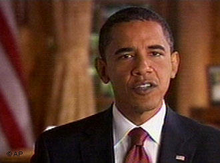 The vague hope that Karsai might be willing to enter into a government of national unity with Abdullah has become an illusion, now that US President Obama has congratulated Karsai on his "victory in this historic election"

​​ And UN Secretary-General Ban Ki Moon had given his blessing to this charade, thereby clearly acting against the mandate of the UN mission in Afghanistan, whose American deputy head he dismissed because he had insisted on an examination of all cases of alleged electoral fraud.

It's entirely understandable that, under these conditions, Abdullah Abdullah withdrew from the run-off vote.

The vague hope that Karsai might be willing to enter into a government of national unity with Abdullah has become an illusion, now that US President Obama has congratulated his Afghan counterpart on his "victory in this historic election."

In retrospect it may prove to be a "historic election" – but in the most negative way.

Andreas Zumach, born 1954, is Geneva-based UN correspondent for the German newspaper "die tageszeitung" and a qualified economist, journalist and social worker. His latest publication is "Die kommenden Kriege" ("The Wars of the Future"), published by Kiepenheuer & Witsch.

Presidential Elections in Afghanistan
Successful Candidate – Shaky Candidate
Although Hamid Karsai has been declared the winner of the election, the Afghan president is now himself seen by the West as a cause of great insecurity and western governments involved in Afghanistan will be making an even greater effort to find an alternative to him. Report by Andreas Zumach

Afghanistan Five Years after the Taliban
In the Grip of the Jihadists
Hopes were high for Afghanistan's democratic renewal; but no one wanted to challenge the power of the warrior princes in the north of the country. Today Hamid Karzai's government is mired in a profound crisis of confidence. By Thomas Ruttig

Reconnaissance Flights against the "Neo-Taliban"
A Step in the Wrong Direction
The provision of Tornado reconnaissance planes by the Bundeswehr is a meagre contribution to the major Nato offensive. But this is in any case the wrong way to achieve a comprehensive political stabilization for Afghanistan, Citha D. Maaß believes

END_OF_DOCUMENT_TOKEN_TO_BE_REPLACED
Social media
and networks
Subscribe to our
newsletter