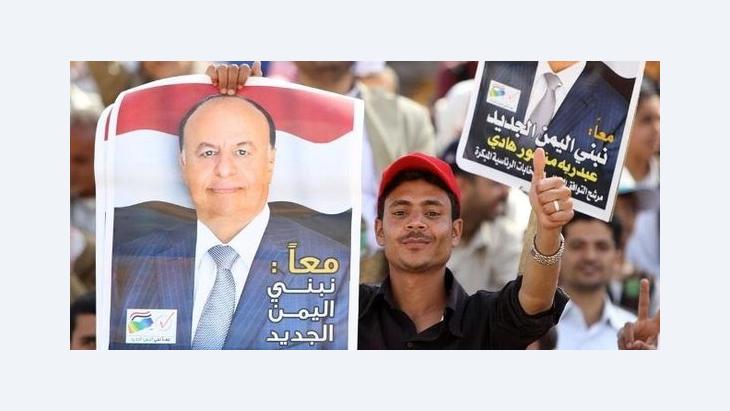 An Experiment in Democracy

Yemen is voting for a successor to President Saleh, who was overthrown after months of protest. But the only candidate is the vice-president, Abed Rabbo Mansur Hadi. And how he can possibly turn into the "Saviour of Democracy" in Yemen remains a mystery. Birgit Svensson reports from Sanaa

It stinks in Sanaa. In front of the German embassy, in front of the foreign ministry, behind the hotels, or in the old city which the UNESCO has voted a world heritage site: all over the Yemeni capital there are mountains of decaying trash.

It's only the innumerable goats which are currently looking after the rubbish – the trash collectors have been on strike for over two weeks. "That's democracy," says Hayel Abdulhak Besher ironically. "The workers want more pay."

That applies too to the workers at the state oil company in Masila, the country's largest oilfield. With a daily production of 260,000 tons, Yemen is a relatively small oil producer compared to others in the Middle East. But there's been no oil from the second-largest field in Maarib province since November either, as a result of several attacks on the pipeline since the revolution started a year ago. 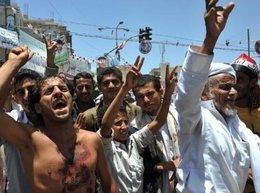 Small steps to success: The Yemeni people forced their long-serving ruler, President Saleh, out of office after months of protest. But the current election, with just one candidate, does not seem very convincing to many of the democracy activists in the country

​​Oil production in Yemen, the country's main source of income, is currently at a standstill. Hayel Abdulhak Besher empties his medicine tin and tries to be optimistic. "It'll all be better after the elections," he says. Besher is the third-richest man in Yemen: he owns hotels, construction companies, mobile phone networks and oil drilling licences. If democracy really came to Yemen and the wealth were divided up differently, Besher, in his fine beige suit, might have a lot to lose.

But there's a long way to go before that happens, and many of the 24 million inhabitants of the country at the bottom of the Arabian Peninsula are asking themselves right now if it ever will. Besher days he is convinced that everyone will go to the polls to back the current interim president, Abed Rabbo Mansur Hadi.

"They've certainly driven the wagon into the shit," says Nabil Almakaleh, and he's not talking about the piles of stinking rubbish all around. He's referring to President Ali Abdullah Saleh and his supporters. Almakaleh is 43 years old and runs a number of social projects with the support of the German development bank KfW. He's having to watch as his country falls apart a bit more every day.

His foreign colleagues have all left Yemen already. There are no Germans in the country any more except for a few in the embassy, even though Germany has for years been Yemen's biggest aid donor. "Saleh should have resigned in 2006," says Almakaleh. "Then it would still not have been too late."

That was the year of the last presidential election, which took place amid the protests of the opposition parties. But the despot hung on to power, as did most of the other rulers in the region in those days.

An "election" with a certain outcome: Abed Rabbo Mansur Hadi, vice-president to the autocratic ruler Ali Abdullah Saleh, is the only candidate for the presidency, and is seen by many members of the opposition as a representative of the old regime

​​Two years later, he raised the possibility of serving a third term, even though this is forbidden under the constitution, or of handing over power to his son. From then on, the opposition grew dramatically. Almakaleh says that whenever he got a newspaper with a picture of the president on the front page, he would cross his face out with a pen: "I was that angry with him!"

"It can only get better"

By the end of January, when Saleh finally left the country for the USA, he'd been in office for 33 years, making him the longest-serving ruler in the region. He left behind him nearly 1,000 demonstrators killed, many more wounded, a broken country and a capital scarred by months of street fighting. But Almakaleh says he's going to vote, even if it won't get rid of the old guard and even if the election is just leading to a two-year transitional period: "It can only get better."

On February 11th last year, when the Egyptian president Hosni Mubarak was forced to resign after mass protests, the spark of the Arab Spring took light in Yemen as the third country in the chain. Young people stormed Tahrir Square in Sanaa. But they were taken by surprise: the square on the edge of the Old City was occupied. Saleh's supporters were already there, putting up their tents.

So the young people went on to the parade ground close to the presidential palace. But the police were waiting for them there and beat them back. So they went on to the university square. Tawakkul Karman's tent was one of the first to be put up in what was renamed "Sahet al-Taghier" – "Change Square."

Ever since the activist won the Nobel Peace Prize, there's a proper desk in front of her tent. There's a generator, electricity and a television. Two secretaries try to put off visitors. Tawakkul herself has gone underground, and for now only communicates via Facebook. 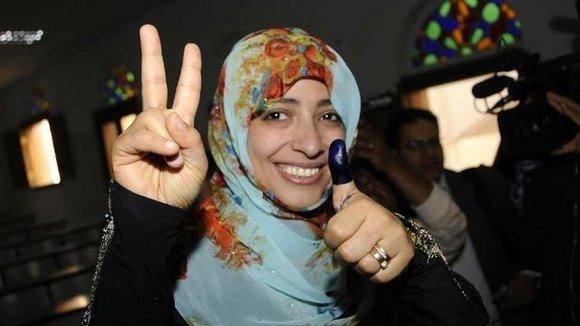 Prominent supporter of elections: "We declare the period of Ali Abdullah Saleh to be over, and we will build a new Yemen," said Nobel Peace Prize laureate Tawakkul Karman as she voted on Tuesday at the University of Sanaa. Karman was one of the organisers of the mass protests against the former dictator

​​In the week before the elections she had received two serious death threats. The radical Islamic organisation "Ansar al-Sharia" is thought to be responsible, because they say she's moved too far away from Islam. Karman originally belonged to the Islamic opposition party "Islah", but she left it when it entered an alliance with Saleh's government party and agreed to join a coalition.

"Tawakkul Karman is now one of us," say Ismael and Safaa, who were also there at the start. They belong to the largest protest group, "Shabab" – "Youth". Ismael studies at the nearby university during the day and spends his nights in a tent. For Safaa it's the other way round: she spends her days in Change Square, and has to go home when it's dark.

The fronts run right through the political camps

The situation in Yemen since the start of the revolution is much more complicated than it is in Tunisia or Egypt, where it all began. While in the two African countries the people had the support of the army in their fight against the president, the divisions in Yemen run in all kinds of directions. 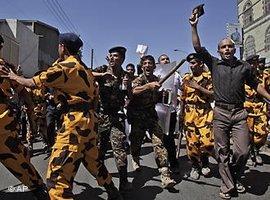 Unlike in Egypt or Tunisia, there was never an alliance between the military and the protesters in Yemen: As Birigit Svensson writes, "While in the two African countries the people had the support of the army in their fight against the president, the divisions in Yemen run in all kinds of direction"

​​In Egypt, the alliance between the military and the protest movement has been ended, but in Yemen, it never existed. Initially, the opposition parties which were in parliament tried to exploit the situation: they put up their own tents on the square. Now all the streets which lead to "Sahet al-Taghier" are closed and full of tents. Most of the stores have had to close and companies and shops have gone broke.

After the first bloodbath in mid-March involving government troops and tent-dwellers, General Ali Mohsin and his First Brigade offered to protect the protest movement. He had been a close friend and long-standing colleague of President Saleh, but he turned away from him. The power struggle began.

Units of the army fought each other. The conflict seemed for a while a bit like what had happened in Libya. And then the leader of the powerful Ahmar tribe got involved, and, for five months, Sanaa was divided in three. One can still see the blood on the houses riddled with bullet holes.

Now, Abed Rabbo Mansur Hadi, Saleh's long-serving vice-president, is supposed to solve the problems. "If there's 20 percent turnout, Hadi will win," says Mohy al-Dhabbi. "If there's only 5 percent turnout, Hadi will still win." He talks of a winner's election: since there's only one candidate, there can't be any losers. All the same, he says, the transitional government and the Americans "who are organising the show" have agreed to use the term "early presidential elections", even though it's really a referendum.

Dhabbi was Yemen's ambassador to Germany, and he's now deputy foreign minister. He fully supports the plan to use the election of the interim president to initiate a process of democratisation. "We already have a mixed transitional government made up of members of the governing party and the opposition," he says optimistically. "So we're ahead of the Egyptians on that."

In recent years, Tehran had pushed a clever public-relations campaign to depict Soleimani as a Napoleon- or Caesar-like warrior-poet. He was even mooted as a likely presidential ... END_OF_DOCUMENT_TOKEN_TO_BE_REPLACED

Taking the Fridays for Future movement as his starting point, Muslim environmental expert Tarik Quadir talks to Marian Brehmer about the connections between Islam and ... END_OF_DOCUMENT_TOKEN_TO_BE_REPLACED

Equality in divorce, a ban on polygamy: reformers of Islamic family law have a clear agenda. They are exploiting the ambiguity of traditional jurisprudence. By Joseph Croitoru END_OF_DOCUMENT_TOKEN_TO_BE_REPLACED

Yazz Ahmed is one of the most exciting personalities on the lively London jazz scene. Her complex musical suites combine the traditions of her Bahraini roots and jazz ... END_OF_DOCUMENT_TOKEN_TO_BE_REPLACED

Over the years, Arab women demanding change to the status quo have faced fierce resistance from legislators and decision-makers alike. This merely reflects the fear felt by men ... END_OF_DOCUMENT_TOKEN_TO_BE_REPLACED

The collapse of traditional multilateralism in the Arab world has been accompanied by a significant shift in American Middle East policy under President Donald Trump, writes ... END_OF_DOCUMENT_TOKEN_TO_BE_REPLACED
Author:
Birgit Svensson
Date:
Mail:
Send via mail