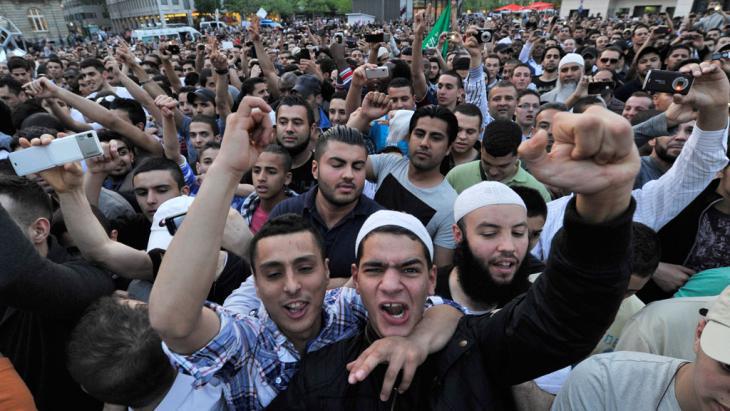 Many of those individuals joining the jihad have little knowledge of the Koran. Yet there are other signs that indicate whether somebody might carry out an attack in the name of Allah. By Frederike Haupt

Why do people who care little for jihadist ideology take up the cause? The question arises because suicide bombers who invoke Allah often know little about him. An international study assessing the data of 330 IS recruits last year revealed: the more religious knowledge the men ascribed to themselves, the less willing they were to carry out a suicide attack. What motivates those who are willing to carry such atrocities is therefore key to answering the question of prevention.

In the case of the 26-year-old Palestinian who recently stabbed a man in a Hamburg supermarket, it is too early for an answer. What we do know is that he called out "Allahu Akbar" during the attack and later stated that he had hoped to die a martyr's death. But he also said that he had decided to adapt an Islamic way of life just two days before the attack, while the attack itself was wholly spontaneous. He didn't bring the knife with him into the supermarket, but simply grabbed it off the shelf. Over the course of previous weeks, the man had been dutifully organising his documents ahead of his departure from Germany.

Now he's in detention, on suicide watch. Even before the attack, the Palestinian had been regarded as psychologically unstable, but state prosecutors currently see no conclusive evidence of "substantially limited criminal responsibility". The investigation continues.

Extremist ideology alone is not enough

The forensic psychologist Jerome Endrass has explored the question of how people get to the point where they carry out an attack in Germany. He is a researcher at the University of Konstanz and together with Germany's Federal Criminal Police Office, he has developed a system to help police assess the risk of whether a Salafist will carry out an attack. The system is due to be introduced this summer.

But Endrass is keen to stress: an extremist ideology alone is not enough. Someone who has a radical Islamic world view, but who is otherwise stable with no psychological illness, who doesn't threaten violence or obtain weapons, is not regarded as a risk. Conversely, this means that the ideology is only part of a blend of factors that motivate a perpetrator to carry out an attack.

War and machismo – a potent mix: ″Those attracted by the IS propensity for violence barely engage with Islam,″ says Bielefeld-based violence researcher Andreas Zick. He sees clear parallels between the kind of propaganda peddled by right wing extremists and Islamists. "The cruder and simpler the theories were, the more successful they were.″ The important thing for the young men was the message that they were warriors

As Endrass says, the explanations for such deeds don't differ all that much from explanations for killing sprees or for stalkers who become violent towards the person they are pursuing. Students who carried out mass shootings at their schools have also used ideologies shared by others in particular Internet forums to justify their actions. Endrass' research shows that what violent perpetrators – whether rampage killers or terrorists – have in common is a "conspicuous personality".

The academic identifies four attacker prototypes; the categories are less clearly defined in reality, but the classification facilitates police work. The first category concerns the mentally ill – for example schizophrenics; secondly, people with personality disorders – for example those with narcissistic personality disorders; thirdly, those who feel drawn to the authoritarian and belligerent character of jihad; and fourthly Muslims who feel despised and discriminated against in Europe and perceive jihad as an invitation to avenge themselves.

Among the attackers in Germany claiming to act in the name of Islam, the first group plays a subordinate role. That is Endrass' assessment, one that is supported by other studies. It is also obvious: the mentally ill are often not in any position to carry out an attack, let alone make contact with members of "Islamic State", whether through travel to Syria or by other means. They are more likely to be pursuing their own conspiracy theories. By the same token, those who are severely depressed generally cannot and do not want to get it together to carry out an attack in the name of IS. There are, however, definite cases of suicide attempts from refugee camps.

Doctors at the Berlin Centre for the Treatment of Torture Victims estimate that at least a quarter of the refugees coming to Germany need psychological support. Islamists have in the past attempted to exploit the weakness of the mentally ill: thirteen years ago, a relatively unknown Central Asian Islamist group made headlines in Germany for trying to become the wards of Muslims who had been in psychiatric care following failed suicide attempts. At the time, security agencies suspected that the group may have intended to deploy them as suicide attackers at some point. But there is no evidence that such a strategy has become widespread since.

In Doha, Arabs from Morocco, Tunisia, Egypt and Algeria are gathering to celebrate the first ever FIFA World Cup to be held on Arab soil. The criticism from Europe? Over the top, ... END_OF_DOCUMENT_TOKEN_TO_BE_REPLACED

Canan Topcu came from Turkey to Germany as a child. In her essay, she describes how bothered she was by the racism she encountered in her country of origin when she travelled ... END_OF_DOCUMENT_TOKEN_TO_BE_REPLACED

All organisers use major sporting events like this year’s FIFA World Cup in Qatar primarily to advertise their country and promote a slick public image. This is not something we ... END_OF_DOCUMENT_TOKEN_TO_BE_REPLACED

A leading light of Israeli theatre, Ofir Henig has directed the Israel Festival and is the only female director to have been awarded the Israel Theatre Prize. These days, however ... END_OF_DOCUMENT_TOKEN_TO_BE_REPLACED

Antoine Leiris lost his wife in the Islamist terrorist attack on the Bataclan club in Paris. German director Kilian Riedhof has made a film of his book "You will not have my hate ... END_OF_DOCUMENT_TOKEN_TO_BE_REPLACED

Lamya Kaddor, MP for Germany’s Green Party, visited Qatar with a group of parliamentarians. In interview with Claudia Mende, she advocates a differentiated picture and urges that ... END_OF_DOCUMENT_TOKEN_TO_BE_REPLACED
Author:
Friederike Haupt
Date:
Mail:
Send via mail

END_OF_DOCUMENT_TOKEN_TO_BE_REPLACED
Social media
and networks
Subscribe to our
newsletter