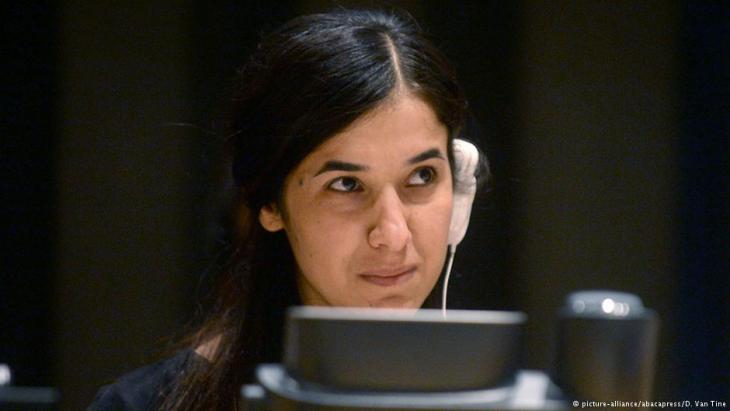 She escaped from a living hell: Nadia Murad gives a face to the thousands of Yazidi women who were raped by members of IS. She openly tells of her time as a sex slave, her sorrow and her desire to change things. By Sabrina Pabst

Nadia Murad Basee Taha will never forget 15 August 2014. It was on this day that her ordeal began. She would later refer to this a living hell that she managed to survive. Nadia was 19-years-old when her life changed abruptly. Up until then, she had harboured great plans. She was allowed to attend school and wanted to become a history teacher or perhaps even open up her own beauty salon in the small village of 2000 inhabitants where she lived.

Her village lies in Sinjar, a region of northern Iraq populated mostly by Kurdish Yazidis. Many had already fled the village out of deadly fear of the terrorist organisation Islamic State (IS).

Within one hour, more than 300 men, women and children from the village were suddenly torn from Nadia Murad's world. The IS unleashed a bloodbath. Before her very eyes, her six brothers were murdered because they refused to convert to Islam. She was forced to witness how the terrorists murdered her mother. Those who survived the attack were abducted and brought to Mosul, an IS stronghold. Nadia was one of them.

For three months, she was a prisoner of IS fighters, who in the summer of 2014 had taken large sections of Syria and Iraq, overrunning villages populated by Yazidis, Christians and other non-Muslims. During these three months, Nadia Murad suffered the fate of a sex slave – she was beaten, tortured and raped. It was to be a fate shared by more than 5000 Yazidi women. 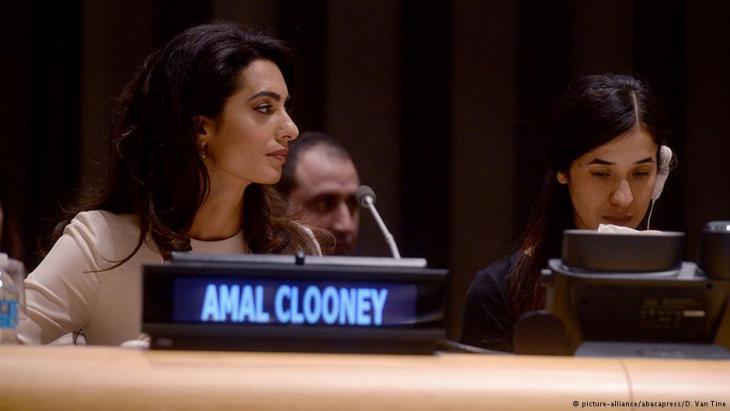 United against inhumanity: the case of the tortured Yazidi women has become a cause celebre for lawyer Amal Clooney. Together with Nadia Murad, she is aiming to bring IS before the International Court of Justice

Almost two years later, she was formally appointed UN Goodwill Ambassador for the Dignity of Survivors of Human Trafficking in order to draw attention to the suffering of the estimated 3400 Yazidi women and children still held prisoner by the IS fanatics. UN Secretary General Ban Ki Moon said that he was "moved to tears" by the fate of the young woman, as well as by her "strength, courage and dignity."

In a monotone voice and with hardly any visible signs of emotion, the young woman with long brown hair and sad eyes reported to the United Nations about her time in captivity, the indignities she suffered and the unrestrained violence that she and a further 150 Yazidi families were forced to endure. "I was not alone and perhaps I was the luckiest. Over time, I found a way to escape, while many thousands could not. They are still being held prisoner," she said. "I am here in order to represent those who have been taken from us. We cannot bring them back. We will cherish their memory as we continue to fight."

"Thousands of others could not escape"

Some women, she relates, took their own lives out of desperation. Not Nadia. "I did not want to kill myself, but I did want them to kill me," she said in an interview with Time magazine. After three days in captivity, she was given to an IS fighter as a present. He humiliated her and tortured her daily. She was severely punished for her first attempt at escape. She was placed in a room where she was forced to undress. Her guards abused her and she was molested by a number of men until she fell unconscious. After three months of absolute torture, she finally managed to escape. Since then, she has lived in Germany and has been campaigning for the international community to recognise the horrors committed against the Yazidis as genocide.

With the support of her lawyer, Amal Alamuddin Clooney, Nadia Murad wants the Islamic State to be brought before the International Court of Justice. On the occasion of the young Yazidi woman being named UN Special Ambassador, Amal Alamuddin said, "I wish I could say that I am proud to be here. Yet, I am not." She finds it shameful that the UN has frequently been unable to prevent genocides or to pursue its perpetrators, as the interests of member countries stand in the way. "As a woman, I am ashamed," continued Amal Alamuddin, at how girls such as Nadia are treated like merchandise and their bodies used as combat zones. "I am ashamed that we have ignored the cries for help."

She continues in her tireless struggle to win allies in the fight against the enslavement of her sisters in faith in northern Iraq by the terrorist militia. Her efforts have led her to travel around the world. She has met with Egyptian President Abdul Fattah al-Sisi and Greek President Prokopis Pavlopoulos. "I call upon you to convey my concerns to the European Union, as thousands of women and children are still being held captive," she exclaimed to an audience in Athens.

She has also sought out discussions in Norway and Iraq. After one such meeting, the Norwegian politician Audun Lysbakken even submitted Nadia's name to the Nobel Prize nomination committee. "We would like a peace prize that rouses the world to fight against sexual violence as a weapon of war," he said, justifying his decision.

On account of her fearless commitment, she is still being pursued by the IS and has received death threats. Yet, death has lost its terror for Nadia. "Death is harmless in comparison to the hell that we all had to endure."

Home
Print
Newsletter
More on this topic
The abduction of women by IS: Traded like cattleThe culture and faith of the Yazidis: Demonised and eternally misunderstoodThe genesis of Islamic State: A new chapter in the decline of the Arab world
Related Topics
'Islamic State' | IS, Human rights, Jihadism | Jihadists, Refugees, Sexism and violence against women, Women in the Islamic world, Yazidi
All Topics

Any reconciliation between Turkey and Syria’s Assad regime would have disastrous consequences for many Syrians, explains Syria expert Kristin Helberg END_OF_DOCUMENT_TOKEN_TO_BE_REPLACED

Iraq bears the scars of decades of conflict and has seen its antiquities plundered, yet the House of Manuscripts' collection has managed to survive END_OF_DOCUMENT_TOKEN_TO_BE_REPLACED

As Syrian camps housing families of Islamic State fighters get more dangerous, there are calls to bring children out, even if the mothers don't want to go. The idea of separating ... END_OF_DOCUMENT_TOKEN_TO_BE_REPLACED

Morocco has taken the 2022 World Cup by storm, with the northwest Africans reaching the semi-finals for the first time in their soccer history. As the knockout match approaches, ... END_OF_DOCUMENT_TOKEN_TO_BE_REPLACED

The Islamic Republic has been unable to quell the civil unrest that erupted three months ago, after Mahsa Amini died after being detained for violating hijab rules. Now the ... END_OF_DOCUMENT_TOKEN_TO_BE_REPLACED

The Kurds are under attack from two sides: from Turkey, and from Iran. The situation in their territories in northern Iraq is becoming increasingly desperate. Birgit Svensson ... END_OF_DOCUMENT_TOKEN_TO_BE_REPLACED
Author:
Sabrina Pabst
Date:
Mail:
Send via mail

END_OF_DOCUMENT_TOKEN_TO_BE_REPLACED
Social media
and networks
Subscribe to our
newsletter