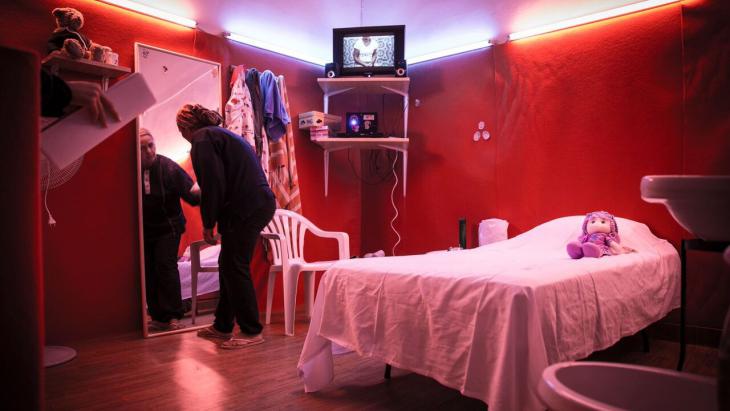 An art project exposes just how much the state controls sex workers in Tunisia. Such women not only have their freedom of movement restricted, they also face social isolation. Several brothels have been closed down since the Jasmine revolution. A report by Christina Omlin

Prostitution is a taboo subject in Arab countries. "Much Loved" – the film about sex for sale in Morocco by Nabil Ayouch, attempted to break this taboo. The movie was screened at the Cannes Festival in the spring of 2015, but was banned in Nabil Ayouch's homeland Morocco. Tunisia was the first Arab nation to screen the film in November and levels of public interest have been high. The film was awarded the "Grand prix" at the film festival where it was screened.

Tunisia is currently the only Arab country where sex workers - in "maisons closes", or brothels - are still tolerated and not forced into illegality. They can apply for a licence for their work, although they are subjected to strict monitoring by the morality police.

At the "Dream City" festival in November 2015 the artist couple Laila Soliman/Ruud Gielens (Egypt/Belgium) created an installation in Tunis on the issue. During an extended stay in Tunisia, they carried out research into the subject of prostitution and drew on their findings to develop the installation "Grande Maison". 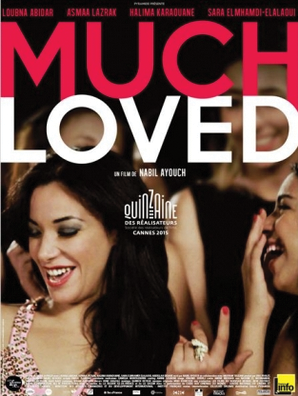 "In violation of moral and religious values": the Moroccan government banned screenings of Nabil Ayouch′s film "Much Loved" in May 2015, saying it would damage the Kingdom′s reputation. Prostitution is still taboo in the Maghreb country

The state as pimp

Sidi Abdallah Guech: one of these notorious "milieus rouges" is located in three narrow winding alleyways in the old town of Tunis. Only men – and of course the women who work here – are allowed to enter.

A scale model of the area stands on a table inside a house in the district of Beb Menara. The audience enter the house just like punters enter the cul-de-sacs of Sidi Abdallah Guech. Photos are not allowed, indicates the guard on the door. He requests that mobile phones are turned off. Guests are received by the smiling "patronne", the brothel manager, who assigns us a room. The door is slammed behind us. There's no sex worker here, but a historian presenting facts about Tunis' red light district.

In 1942, the Tunisian government legalised the status of sex workers as "fonctionnaires" – or civil servants and since then the state has collected taxes and supervised the women.  And it does this very stringently, says Belgian artist Ruud Gielens. The everyday lives of these women are regulated to such an extent that it could be described as almost total control by the state, he says.

"The state is the pimp, so to speak; the women's bodies are at its disposal." The prostitutes′ freedom of movement is severely restricted: if any of them leaves the small neighbourhood without a permit, they lose their licence. They are also not allowed to do any other job on the side. They can only take time off for menstruation.

A life on the periphery of society

The women have to undergo a health check twice a week to prevent the spread of STDs. They are tested for HIV once a month. For the artist Laila Soliman, despite all the criticism of the rigid working conditions that give the workers few rights but many obligations, this is one advantage over working illegally. "The men have to use condoms; the police are always present and protect the women against violent attack. The health provision is good," she says.

But nevertheless, life in the brothels is anything but rosy. The sex workers may have their own income, but they are socially isolated. Most people look down on them, although some are accepted by their own families.

There is no public discourse on the subject. In Muslim Tunisia too, sex is officially regarded as only taking place between married couples. Additionally, the sex workers are regularly subjected to the corruptibility of their supervisors.

The number of brothels has taken a nosedive since 2011. The Islamist government installed for two years turned a blind eye to fundamentalist action against such establishments. Especially in the south of the country, sex workers were driven out, brothels destroyed or forced to close. "The police are no longer issuing new licences," says Laila Soliman.

An angry crowd also advanced upon the brothel in the old town of Tunis in February 2011. But the sex workers were protected by local residents, until the police finally stepped in. Since then the district has been shielded by an iron gate, the sign indicating the name of the alleyway was removed. The brothel is shut during Ramadan and Friday prayers, as a concession to devout Muslims.

Another room used by the Soliman/Gielens installation has been set out like a sex worker's room. It looks bare: a bed, a washbasin, a fan, a mirror. In a video a former sex worker talks about her everyday life. 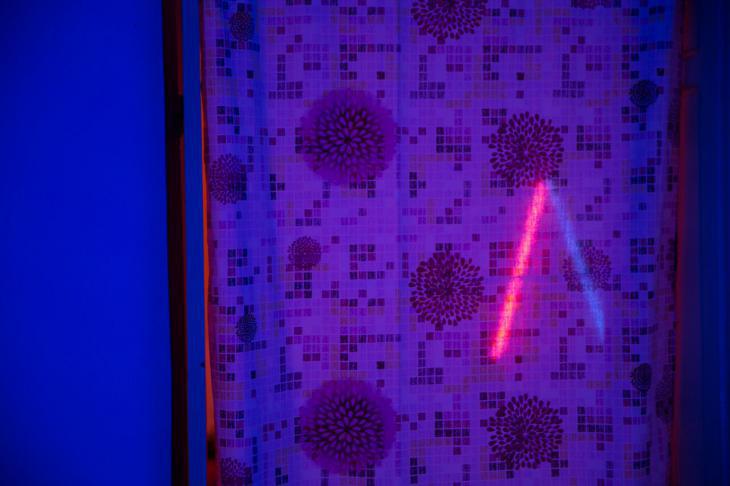 Under pressure: since 1942, the Tunisian government legalised the status of sex workers as "fonctionnaires" – or civil servants and since then the state has collected taxes and supervised the women. And it does this very stringently. The everyday lives of these women are regulated to such an extent that it could be described as almost total control by the state, says Belgian artist Ruud Gielens

Ruud Gielens and Laila Soliman were able to speak with several of the women. "They speak of 20 to 30 customers a day. These pay 10 dinars, that's 5 euros per visit. Half of that goes to the "patronne" and as a tax to the state. Which leaves 2.50 euros for one session."

As a man, Ruud Gielens was able to visit the area, because foreigners are also allowed. Laila Soliman was also able to enter with a special permit. What Ruud Gielens did not expect: the solidarity in this small society, despite the repressive conditions. "In this closed system, where the social 'pariahs' meet, you encounter a great deal of humanity. They are there for each other," he says.

It is not known how many sex workers there are in Tunisia. There are currently no official statistics. The morality police keep a low profile and don't give out any information. Nevertheless, Laila Soliman sees a burgeoning self-esteem among the women. "Those who lose their licences are no longer just accepting it, but complaining to the interior ministry. Or if a woman feels she has been unfairly treated by the police, she will give evidence in court," she says.

The artist couple Soliman/Gielens aims to give the marginalised women in the brothels a voice. They made this installation for Tunisian audiences, says Ruud Gielens. "This is the first time that many people have seen the restrictive conditions these women live in. This is about making something visible that the state would rather keep under wraps." It was also important to the artists not to go public with tawdry images in Arab countries. "The women remain anonymous, we don't show any 'juicy details'. It should also be possible for conservative audiences to view this installation."

Audience reactions are proving them right. Many Tunisians were interested to discover what happens in the brothels and what role the state adopts in this context, even if they are critical of the sex trade itself. Although rumour was rife, no one really knew any precise details. Now this installation has given several hundred Tunisians the opportunity to access reliable information on prostitution in their country.

The façade of a twelfth-century cathedral is an unlikely place to find a message in Arabic script carved in stone, but so it is in the Portuguese city of Coimbra. Marta Vidal ... END_OF_DOCUMENT_TOKEN_TO_BE_REPLACED

The country's national election on 8 September will likely bring new government. But neither experts nor locals expect it to bring long-promised change, writes Cathrin Schaer END_OF_DOCUMENT_TOKEN_TO_BE_REPLACED

The coronavirus pandemic has turned lives upside down all over the world. In the Middle Ages, however, people lived with epidemics all the time. The best and most famous ... END_OF_DOCUMENT_TOKEN_TO_BE_REPLACED

A bird's eye view of eight hundred years of history: Brian A. Catlos tells the story of Al-Andalus in the style of a streaming series and deconstructs the myths of the Reconquista ... END_OF_DOCUMENT_TOKEN_TO_BE_REPLACED

In his new book, "Tangier/Gibraltar- A Tale of one city: An Ethnography", Dieter Haller looks at how shared experiences and practices have created a unique relationship and a ... END_OF_DOCUMENT_TOKEN_TO_BE_REPLACED

While Europe and North America experience something like a return to normality with relatively high vaccination provision and take-up rates, the rest of the world is struggling to ... END_OF_DOCUMENT_TOKEN_TO_BE_REPLACED

Comments for this article: The big reveal

"There is no public discourse on the subject. In Muslim Tunisia too, sex is officially regarded as only taking place between married couples." What anthropological or sociological study have you relied upon? I lived in Tunis for 10 years; what you are saying is inaccurate. You should look at studies relating to sexual intercourse among students, young people in affluent quarters, the number of abortion caes among the umarried, as well as the number of "restoring virginity" operations... You should also use a more common name for the Tunisian "revolution": just refer to what most Tunisians call it instead of repeating imposed names. Also, there is no single price for a sexual act with a prostitute in Guesh. The age and "beauty" of the woman affects the price. You should also have mentioned what type of "government" there was in 1942 colonised Tunisia. Only last year a law, criminalising homosexuality, that goes back to the French era, was revised.

END_OF_DOCUMENT_TOKEN_TO_BE_REPLACED
Social media
and networks
Subscribe to our
newsletter