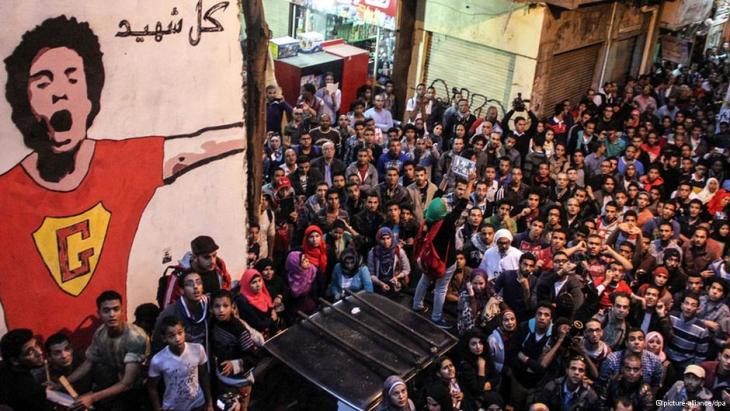 Egypt's Islamists demonstrated for months against the army. Now, secular activists are out in the streets to protest the co-opting of their revolution. But, the military government has a propaganda machine on its side. By Markus Symank from Cairo

Accompanied by brass-band music and dignified-looking men in uniform, Egyptian Prime Minister Hasim Beblawi on Monday (18.11.2013) inaugurated a monument on Cairo's Tahrir Square to those who died in the revolution. Less than 24 hours later, activists had torn down the plaque and daubed the monument with graffiti. "Down with the traitors to the revolution: Islamists, Mubarak loyalists and the army," they wrote in blood-red letters.

To bystanders' applause, one of the activists shouted into his megaphone: "We do not want to kill anyone, we do not want bloodshed. All we want is justice for the martyrs and punishment for anyone who has damaged the country and the revolution, so our country can be better."

Nearly three years after the popular uprising against President Hosni Mubarak, the murderers of protesters were still at large, he shouted, adding that the new regime protects the security forces who were responsible, just like the old one did. That the murderers have now built a monument to their victims is a farce, he said. 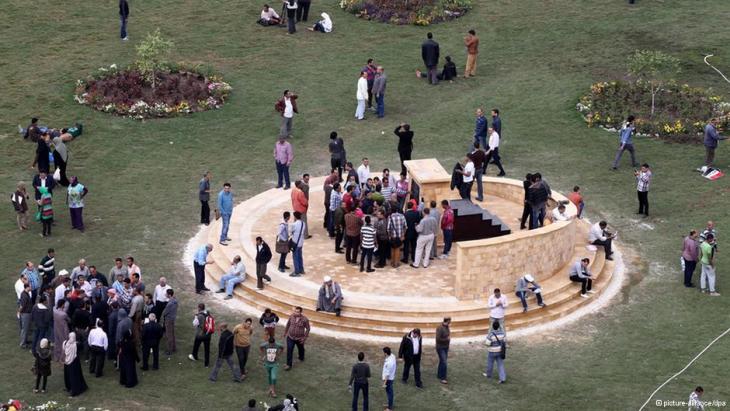 People gather around a memorial that was established to commemorate those killed in the revolutionary unrest, at Tahrir square in Cairo: Less than 24 hours after the inauguration of the memorial clashes occurred between the Egyptian army and demonstrators

During the past four months, only the followers of ousted Islamist President Mohamed Morsi demonstrated against the army and the interim government it set up.

Now, for the first time, resistance is also building among secularists. The young revolutionary activists recently stopped holding protest marches to avoid being labeled as sympathizers of the Muslim Brotherhood. But with increasing reports of arbitrary arrests and torture, and signs that the generals will not give up their privileges enshrined in the constitution, activists no longer feel they can remain silent.

It started last week with blind activist Ahmed Harara. The 33-year-old was probably the first non-Islamist to dare to attack army chief Abdel Fattah al-Sisi publicly.He deliberately chose the date for his appearance on Egyptian television station Al Nahar, just before the second anniversary of the so-called Mohammed Mahmoud massacre, named after a street off Tahrir Square. 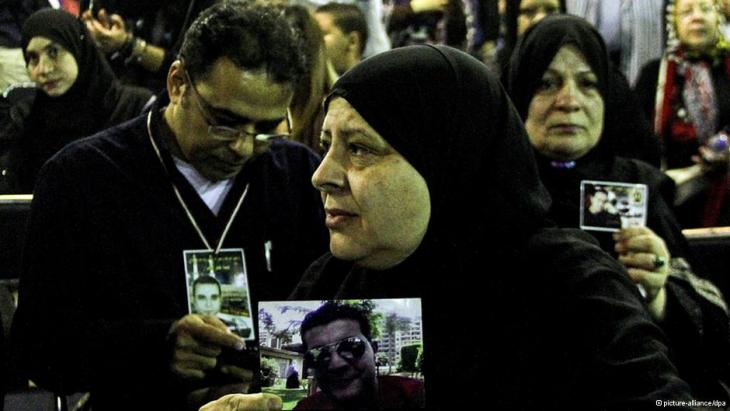 Deep grief: Relatives and friends of young Egypians killed in clashes hold their photographs one day before the National Holiday, 19 November 2013

At least 47 people were killed by security forces in a fog of tear gas and bullets as they demonstrated for the generals to withdraw from politics.

Harara himself was hit in the left eye by a rubber bullet. Ten months earlier, he had lost his right eye during the uprising against Hosni Mubarak. Directing his comments to the television audience, he said: "The military council that killed these people must be held to account. Al-Sisi, who now holds the reins, was then already a member of the Supreme Council of the Armed Forces."

Regime rewrites history of the revolution

For the army, the respected activist's call indeed came at an inconvenient time, as it was already looking nervously toward the anniversary of November 19, 2011. The generals have been riding a wave of popularity since the fall of the unloved Morsi. But a constant stream of government propaganda has not been able to put out of Egyptians' minds the distressing images and videos with which the activists then documented the brutality of state power.

The security forces have therefore tried to make the anniversary of November 19 their own. Recently, the Interior Ministry called for a national day of remembrance - for both the civilian victims and the soldiers and police killed since the beginning of the revolution. Even the Islamist Muslim Brotherhood announced protest marches, despite the fact that it had been silent when the state responded to the youthful revolutionaries with violence two years ago. 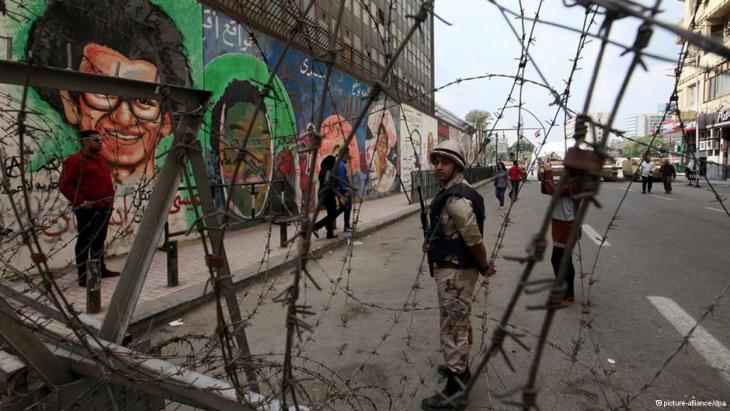 For the army, the call to hold accountable army chief al-Sisi comes at an inconvenient time, as it was already looking nervously toward the anniversary of November 19, 2011

Like many others, the young activist iman criticizes the hypocrisy of the regime as well as the Islamists: "The government and the interior ministry would have us believe the Muslim Brotherhood was responsible for the murders back then and that the Brotherhood wants to abuse the day of remembrance to return to power," she said. "Even though on that day last year, when the Islamists were in power, protesters were killed."

The majority of activists taking part in the protest are left-wing or libertarian, and are determined to wrest the authority to interpret the revolution away from the army and the Islamists. But the number of critics of the army is still relatively small.

More than 1,000 people ventured onto Tahrir Square in central Cairo on Monday night. Hundreds were involved in skirmishes there on Tuesday (19.11.2013) with Sisi followers, while army helicopters circled above the crowd.

The young activist Mustafa complained that it was difficult to combat the propaganda machine of the regime. Those currently taking to the streets will inevitably be denigrated as Islamists or terrorists, he said. This makes it all the more important to show the people a real alternative: "We have to find a third way. We have to create a government that is neither religious-fascist nor military-fascist."

The government has taken precautions in case similar protests ever start to gather momentum. Interim President Adli Mansur can sign a bill into law at any time that would allow the interior ministry to declare troublesome demonstrations illegal. An anti-graffiti law is also being discussed in the cabinet. Whoever takes up spray cans against the army could land behind bars for four years. By comparison, the only police officer so far convicted for his role in the violence on November 19, 2011 received three years in jail.

Two refugees detained in Egypt are facing deportation to Eritrea. The expulsion of the Eritreans, who have been incarcerated in Cairo for more than eight years, has been halted ... END_OF_DOCUMENT_TOKEN_TO_BE_REPLACED

International relations are shifting across the Middle East as regional powers adapt to America's retrenchment and China's growing influence. Although the region could become the ... END_OF_DOCUMENT_TOKEN_TO_BE_REPLACED

Germany's foreign policy is explicitly values-based. But what happens, Ralf Bosen asks, when democracy, the rule of law and human rights collide with the logic of trade and ... END_OF_DOCUMENT_TOKEN_TO_BE_REPLACED

"The people aren’t ready for democracy" has been the constitutional basis for Arab tyranny, its favourite slogan and its sacred narrative for more than a century. Yet, asks Khaled ... END_OF_DOCUMENT_TOKEN_TO_BE_REPLACED

A new global database shows a significant gap in reported COVID-related deaths, suggesting the actual worldwide death toll is short by at least 1 million. That's due in part to ... END_OF_DOCUMENT_TOKEN_TO_BE_REPLACED

Two decades after the attacks of 11 September 2001, the West faces the shattered debris of its failure – not only in Afghanistan, but also in Iraq, Syria, Libya and Yemen. What ... END_OF_DOCUMENT_TOKEN_TO_BE_REPLACED
Author:
Markus Symank
Date:
Mail:
Send via mail

END_OF_DOCUMENT_TOKEN_TO_BE_REPLACED
Social media
and networks
Subscribe to our
newsletter