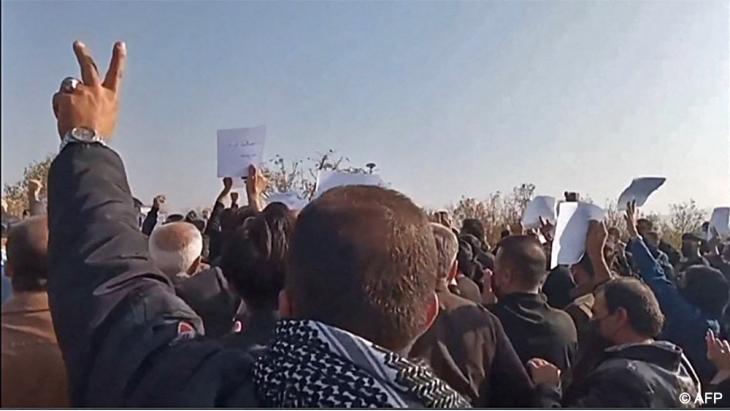 Protesters in Iranian Kurdistan let off fireworks and celebrated after Iran lost to arch-foe the United States in the World Cup on Tuesday, according to social media videos.

The Islamic Republic has deployed state security forces against what it labels "riots" that broke out after 22-year-old Kurdish woman Mahsa Amini died on 16 September, three days after her arrest for allegedly breaching Iran's dress code for women.

Her hometown of Saqqez, as well as other cities in the western province of Kurdistan, have been a flashpoint for protests against the clerical rule.

"Saqqez citizens have started to celebrate and use fireworks after America's first goal against Iran's football team," said the London-based Iran Wire website on Twitter.

It shared a video showing fireworks with sounds of cheering in the background. The content could not immediately be verified.

Another video by Kurdish activist Kaveh Ghoreishi showed a neighbourhood at night in Sanandaj city with sounds of cheering and horns blaring after the United States scored what was the only goal of the match.

Fireworks were also used in Mahabad, another city in Kurdistan, following Iran's loss, according to videos shared online.

The Norway-based Hengaw human rights group said Iranian motorists celebrated the US victory by honking their horns in Mahabad.

It said fireworks also lit up the sky in Marivan, another city in Kurdistan province where security forces have waged a deadly crackdown on the protests. Fireworks and cheering were also heard in Paveh and Sarpol-e Zahab, in Kermanshah province, it added.

The Iranian national team had faced a double whammy of government and public pressure following the protests, with some Iranians going as far as rooting for the opposing teams.

Podcaster Elahe Khosravi also tweeted: "This is what playing in the middle gets you. They lost to the people, the opponent, and even" the government.

"They lost. Both on and off the pitch," tweeted Iran-based journalist Amir Ebtehaj.

The U.S. victory sent Iran out of the World Cup and ensured the Islamic Republic's arch enemy a place in the knockout phase of the tournament in Qatar.

"Now the news of oppression can't be hidden behind the win or loss of the security forces' favourite team," he wrote, referring to videos of the Iranian police celebrating the team's previous win against Wales while deployed in the streets.

Oslo-based group Iran Human Rights says at least 448 people have been killed by Iran's security forces in the crackdown on more than two months of protests.    (AFP)

More on this topic
Protests in Iran: On the eve of a new world era? Asef Bayat on the Iran protests: "A movement to reclaim life"How feminist are the protests in Iran? The struggle for self-determination
Home
Print
Newsletter
MoreAll Topics

END_OF_DOCUMENT_TOKEN_TO_BE_REPLACED
Social media
and networks
Subscribe to our
newsletter