Is Syria the Next Domino?

With the Tunisian and Egyptian regimes gone and street protests roiling cities from Algiers to Teheran, many people are now wondering which domino might fall next. Syria may not be next in line, but appears nonetheless to be approaching a tipping point, writes Ribal Al-Assad 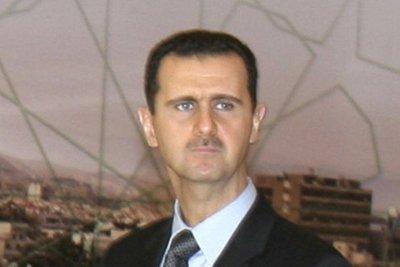 President under pressure: The best way to avoid a confrontation between the people and the security forces is a process of genuine reform, writes Ribal Al-Assad, Director of the Organisation for Democracy and Freedom in Syria

​​ Of course, the old "domino theory" in international relations is only a crude way of emphasising that different parts of any region are linked to each other. For today's Arab world, a better metaphor might be a chessboard, from which the removal of even a pawn inevitably alters the relationships among all the other pieces.

Today, as protests mount and multiply, the government of every Arab state in the Middle East and North Africa probably believes that, if left to its own devices, it can contain internal dissent.

In Syria, it seems inevitable that protest may soon crack the regime's brittle political immobility. Most ordinary Syrians face extremely difficult economic and social conditions, including high unemployment, rising food prices, constraints on personal freedom, and endemic corruption. These factors are no different from those that brought people on to the streets in North Africa and the Middle East. What began as protests over living conditions became full-scale demands for freedom and democracy.

The regime in Damascus is fearful of similar unrest, as it should be. The best way to avoid a confrontation between the people and the security forces is a process of genuine reform leading to elections and a government of national unity. The ingrained inertia of the current regime, however, seems to preclude any early move toward that. 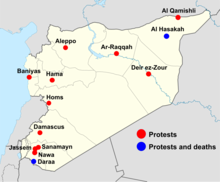 National turmoil: On Friday, several thousand anti-government protesters took to the streets of the cities of Damascus, Homs, Aleppo, Deir al-Zor and Daraa

​​ Instead, Syria's rulers are offering inducements to ensure that key constituencies remain in line – laptops for teachers, subsidies for public-sector workers, and empty reformist rhetoric. But the current situation calls for far more serious measures. Lifting the state of emergency that has been in force since 1963 – giving sweeping powers to the regime and its security services – would be both a symbolic and tangible step in the right direction.

Unless Syria's rulers, like other leaders in the Arab world, begin to appreciate that freedom is a fundamental human right, even the most quiescent people's patience may wear dangerously thin. High food prices may have served as a trigger in North Africa, but the speed with which the protesters turned their attention to political reform caught everyone off guard.

Putting this genie back in its bottle would be virtually impossible without bloodshed of the type we are now witnessing in some parts of the Muslim world. So the Syrian leadership knows that it must respond – hence the half-hearted reform agenda that it recently outlined. But trying to address deep-rooted popular grievances with flowery language and a bouquet of subsidies is like trying to extinguish a forest fire with a water pistol. The solutions to Syria's problems must be as substantive as the problems are serious.

Until now, Syria's rulers have relied on their anti-Israel, anti-Western rhetoric to protect themselves. But cries about the Israel-Palestine conflict were rarely heard in the protests in Tunis and Cairo. Furthermore, in the last few years, when Israeli planes struck targets in Syria, there was no answer from the regime – and still none when Israeli planes flew over the presidential palace. 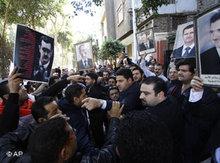 "Unless Syria's rulers begin to appreciate that freedom is a fundamental human right, even the most quiescent people's patience may wear dangerously thin," writes Ribal Al-Assad. Pictured: protests in front of the Syrian embassy in Cairo

​​ The regime claims that it is part of the 'resistance' with its senior partner Iran. However the WikiLeaks cables show that the Syrian leadership told the Iranian regime not to count on it in any war with Israel because it is too weak. So the regime is making a fatal error if it thinks that its old diversionary tactics will continue to provide it with immunity. On the contrary, with a young, well-educated population unable to find suitable work, the regime has created its own cadre of potential protestors, who are aware that it is using empty slogans to keep the state of emergency and stay in power.

Meaningful dialogue with the regime

The Syrian people are strong, patient, resilient, and resourceful. Family and social bonds remain potent in the face of adversity. When food is scarce, people share. When the regime cracks down on the Internet, people use proxy servers.

But they should not have to make do. They should not have to risk their safety when they seek to engage with the world online. No one wants to see the streets of Damascus consumed in protest, or a violent confrontation erupt between protesters and security forces. What the Syrian people want is a meaningful dialogue with the regime.

The regime must appreciate that, despite its best efforts, Syrians have been watching events in the region with as much interest as the rest of the world. Syria's people may have no predilection for violence, but the birth of freedom, once witnessed, is not easily forgotten – or trumped by state handouts and vacuous statements by a distant, self-isolated leadership.

END_OF_DOCUMENT_TOKEN_TO_BE_REPLACED
Social media
and networks
Subscribe to our
newsletter