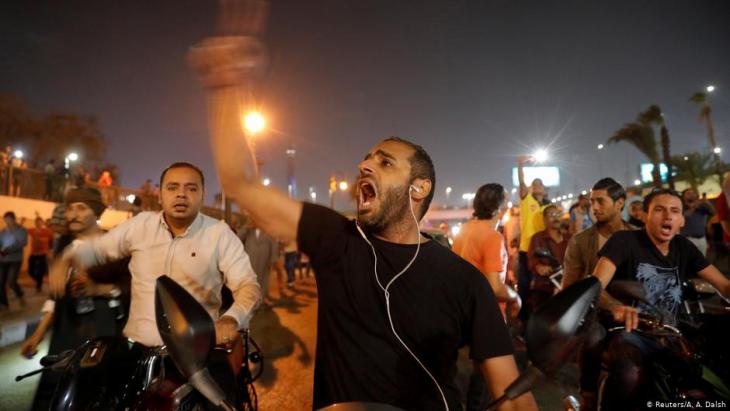 Despite ongoing repression, hundreds of people took to the streets in Egypt at the weekend to demand the resignation of President Abdul Fattah al-Sisi. The protests were triggered by a hitherto largely unknown building contractor and his revelations about the Egyptian army. By Karim El-Gawhary

Suddenly, all fear appeared to have dissipated. Last Friday, Egyptians could hardly believe their eyes as they watched videos posted almost simultaneously on social media of demonstrations on Tahrir Square in Cairo, as well as several other neighbourhoods in the Egyptian capital, Giza, Alexandria, Suez and the Nile cities of Mahalla and Mansoura. Chanting the very same slogans used during the Arabellion calling on Mubarak to step down, this time the demonstrators took aim at Sisi.

These were not mass demonstrations like those held during the Arab Spring eight years ago, sometimes only a dozen people were visible, sometimes perhaps a few hundred. The most surprising thing was the fact that these rallies took place at all. "Don't be scared, Sisi must go" was one of the protesters' slogans.

Taking their courage in their hands

For years, Egypt's security apparatus had managed to uphold a general ban on demonstrations by taking a tough line on any infringements. Anyone taking to the streets of Egypt to demonstrate runs the extremely high risk of being arrested and locked away for years. Most of the young people seen at the demonstrations unfazed by this.

The news agency AFP quoted security sources as saying that at least 74 people were arrested. But that did not deter some young people from attending another rally on Saturday in Suez, before they were dispersed with tear gas. On Tahrir Square in Cairo, by contrast, a large security presence ensured that the events of Friday were not repeated the following day. 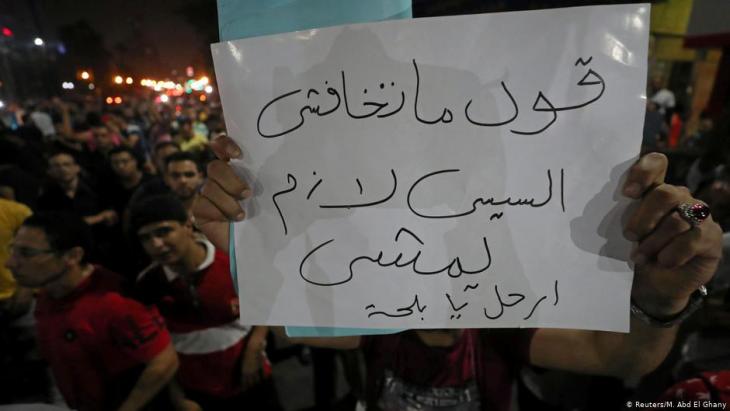 "Don't be scared, Sisi must go!" – Egyptian contractor and actor Mohammed Ali, who lives in exile, called for protests against President Sisi last week. In several videos published on his Facebook page, he accused the president and the Egyptian army of corruption

The rallies were motivated by a phenomenon that has had the nation on the banks of the Nile holding its breath for two weeks now. A previously little-known property tycoon named Mohamed Ali, who worked as a subcontractor for the Egyptian army for 15 years and now lives in Spain, began spilling the beans on his experience on videos posted on social media.

A whistle-blower from the inner circle

Like a whistle-blower from the inner circle of the army's extensive business activities, he divulged supposed details about billions of Egyptian pounds being squandered on real estate deals and backed up with juicy claims, personally accused Sisi of frittering away huge sums of money on his presidential palaces.

Ali, who also profited from these deals, but who is now evidently indignant because the army owes him a substantial amount of money, does not come across as an especially agreeable person himself. But he is speaking in a popular tone that all those in Egypt understand.

Egyptians began clicking on the videos in their masses and waited eagerly every day for the next instalment, as though for a TV soap opera. But that's not all. With the ice now broken, further individuals have since come forward with information on the financial machinations of Sisi and the military, confirming some of Mohamed Ali's accusations and adding new ones to the mix.

"You live in palaces, while we eat from rubbish dumps"

In a nation where one in every three Egyptians – according to a recently published official statistic – lives below the poverty line on slightly less than one-and-a-half euros a day, the story about the cash wasted on presidential palaces has evidently struck a nerve. "Why does he live in palaces while we eat from rubbish dumps?" a woman on the sidelines of a demonstration yelled into a mobile phone camera before posting the video on social media.

Echoing Mohammed Ali’s videos about El-Sisi’s corruption, an Egyptian woman tells the camera: “Why is he living in palaces while we eat from dumpsters?” pic.twitter.com/kRTporaBSa

Few in Egypt would have predicted that Mohamed Ali and his videos would revive street protests – regardless of their scale. It is not known who co-ordinated the almost simultaneous protests on Friday. The remnants of the country's opposition were as surprised by them as former Tahrir activists.

Many are speculating that within the army, the security forces and the regime a power struggle may have broken out over Egypt's future course and the fate of Sisi. They view sub-contractor Mohamed Ali as nothing more than a puppet, and believe that the protests were organised by Sisi's internal foes.

Alleged comments by the former chief of staff and one-time potential presidential rival candidate Sami Anan have added yet more fuel to the speculative fire. Anan is serving a 10-year sentence in a military hospital. On his Facebook page, he called on Defence Minister Mohamed Zaki to arrest Sisi – although Anan's daughter has now denied that this call came from her father. The fact remains that more questions than answers surround Mohamed Ali and the protests.

But even if everything is being directed by an interested party within the regime or the security forces, or by former Mubarak supporters, the entire process could develop a dynamic that will ultimately be beyond anyone's control. This applies all the more because in this supposedly politically-stagnant region, has seen considerable upheaval this year in other locations, for example in Sudan or Algeria. Egypt is also keeping a close eye on developments in Sudan, where protestors campaigning for the installation of a civilian government agreed a transitional period with the military just a few weeks ago.

With Sisi in New York for the UN General Assembly, everyone in Egypt is currently waiting to see what happens next. Mohamed Ali is meanwhile busy producing further instalments of his videos. In his most recent post, he called on further protests to be held next Friday.

"The people aren’t ready for democracy" has been the constitutional basis for Arab tyranny, its favourite slogan and its sacred narrative for more than a century. Yet, asks Khaled ... END_OF_DOCUMENT_TOKEN_TO_BE_REPLACED

A new global database shows a significant gap in reported COVID-related deaths, suggesting the actual worldwide death toll is short by at least 1 million. That's due in part to ... END_OF_DOCUMENT_TOKEN_TO_BE_REPLACED

Two decades after the attacks of 11 September 2001, the West faces the shattered debris of its failure – not only in Afghanistan, but also in Iraq, Syria, Libya and Yemen. What ... END_OF_DOCUMENT_TOKEN_TO_BE_REPLACED

The coronavirus pandemic has turned lives upside down all over the world. In the Middle Ages, however, people lived with epidemics all the time. The best and most famous ... END_OF_DOCUMENT_TOKEN_TO_BE_REPLACED

In Ancient Egypt, the pharaohs had "solar boats" built to take them into the afterlife. One of these boats was discovered in 1954. It has now been moved to the Grand Egyptian ... END_OF_DOCUMENT_TOKEN_TO_BE_REPLACED

Attracting little attention from the world at large, Egypt's military regime has been mercilessly going after dissidents. Now, the first executions of prominent members of the ... END_OF_DOCUMENT_TOKEN_TO_BE_REPLACED
Author:
Karim El-Gawhary
Date:
Mail:
Send via mail

END_OF_DOCUMENT_TOKEN_TO_BE_REPLACED
Social media
and networks
Subscribe to our
newsletter