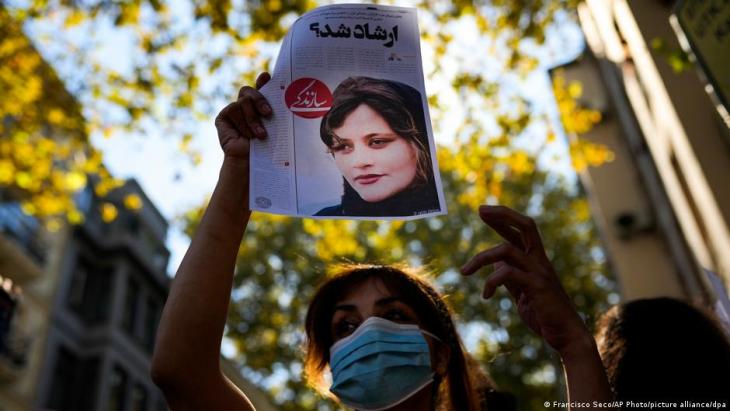 Protests in Iran
Murderous repression by a desperate regime

The death of Mahsa Amini at the hands of Iran's "guardians of morality" is only the latest, tragic example – in a neverending chain of state repression and excessive police violence. Essay by Iranian writer Amir Hassan Cheheltan

A wave of anger and grief has swept through the country in the ten days since the young Kurdish woman Mahsa Amini died in the custody of Iranian morality guards. Some Iranian women have videoed themselves cutting off their own hair, posting clips on the Internet to illustrate the depth of their sorrow. Cutting one's hair was a mourning ritual in ancient Iran.

Mahsa was twenty-two years young. She had come to Tehran with her family from the small town of Saqqez in Kurdistan province at the beginning of autumn, hoping to enjoy a few days off. The capital proved her undoing in the cruellest of ways. Photos show Mahsa to have been a beautiful young woman. Did her beauty give the morality police reason to arrest and intimidate her?

Six people – two men and one woman – were involved in her arrest. "I am just visiting," Mahsa told them, "let me go." But her plea fell on deaf ears. Mahsa was loaded into a vehicle belonging to the Ministry of Culture and Islamic Guidance and taken to a prison. Less than half an hour after her arrest, during which she fainted, she was admitted to hospital. What happened to Mahsa in this horrible detention centre during those thirty accursed minutes?

"Mahsa, a young Kurdish woman, arrested for violating the veiling law in the open street, is in a coma in hospital." As soon as this was announced, the news spread like wildfire across the Internet. Sometime later, a doctor who had examined Mahsa said the young woman had not shown any vital signs on her admittance to hospital. 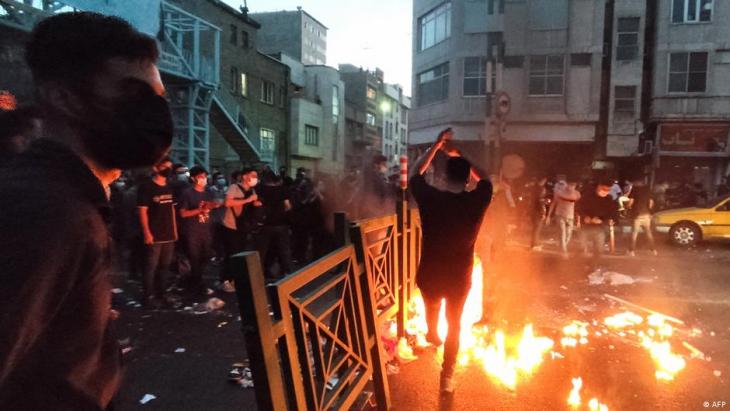 The death of 22-year-old Kurdish woman Mahsa Amini has unleashed a wave of protests across Iran. The authorities have responded with far-reaching restrictions on the already censored Internet. "And yet the Internet is bursting with videos showing clashes between police and protesters: short film clips taken by citizens with mobile phone cameras, revealing what a desperate situation the regime, armed to the teeth, is in," writes Amir Hassan Cheheltan. "But there is no need to capture the excessive police violence in Iran on film. A nation of eighty million people has experienced it live for decades"

Three days after her arrest, Mahsa was dead. Her remains were taken to Saqqez, the town where she was born. Fearing a crowd, the security forces had planned to bury Mahsa in the evening or at night, but her relatives refused. On the following morning, all access roads to Saqqez were sealed off to keep mourners from neighbouring communities from arriving in solidarity.

Doctors across the country called on their Tehran colleagues to declare publicly what had really happened to Mahsa. But the government threatened the radiologists, neurologists, neurosurgeons and emergency physicians who had treated the young woman that anyone offering a medical opinion on Mahsa's CT scan would lose their medical licence.

Some doctors received death threats. An eyewitness arrested together with Mahsa said that the Kurdish woman had protested against her arrest in the patrol car and was beaten as a result. Eyewitnesses in the detention centre said: "When Mahsa was brought here, she was in very bad shape, she was completely debilitated. Her cries for help went unheard, and when we tried to assist her, the officers jumped on us and beat us up. Mahsa was also struck in the process. Finally she collapsed unconscious."

After Mahsa's death, the government announced that she had a heart condition and had suffered a heart attack. Mahsa's father vehemently refuted this version of events: "There was nothing wrong with my daughter. She was killed." Mahsa's mother added, "They murdered my angel."

Doctors examining photos and videos of Mahsa Amini available on social media conclude: "Considering the visible injuries on Mahsa's face and the fact that blood was coming out of her ear, there is no way that heart failure was the only reason for her hospitalisation. Such injuries are indicative of severe physical violence." Independent doctors who have since viewed the report on Mahsa's brain and found blood in her lungs see this as proof that she received severe blows to the head, in clear contradiction to the official statement.

People have met with violent deaths in Iran's prisons for years. Zahra Kasemi, an Iranian-Canadian photojournalist, was arrested in 2003 during student protests. She had been reporting outside the notorious Ewin prison on a gathering of relatives of protesters imprisoned there. Arrested on the orders of the Tehran prosecutor's office, she was murdered during questioning.

Hadis Najafi, 22, was killed on 21 Sept in Karaj after security forces fired birdshot at her in close range, hitting her in the face, neck & chest. #مهسا_امینی pic.twitter.com/Zn5TdJ0rOt

A medical doctor working for the Iranian Ministry of Defence, who performed an autopsy on Zahra Kasemi's body, stated at the time that her death had been caused by violent blows and had resulted from a skull fracture and a broken nose. Moreover, she had been raped before her death. The doctor in question went into exile in Canada a short time later.

Another example of the violent deaths met by prisoners detained in Iran is provided by the events surrounding the electoral fraud protests of 2009, which also saw unrest in Kahrisak prison at the time. Five prisoners lost their lives there. More than 920 people are held in the facility, which was designed for two hundred inmates. According to the Iranian Rapporteur Committee on Human Rights, prisoners are denied their right to go to the yard; visits to the toilet are only allowed once a day and food rations are very small.

When is it and when is it not acceptable to display a political banner at the World Cup in Qatar? The answer seems to depend largely on the political message, with fans ... END_OF_DOCUMENT_TOKEN_TO_BE_REPLACED

The Kurds are under attack from two sides: from Turkey, and from Iran. The situation in their territories in northern Iraq is becoming increasingly desperate. Birgit Svensson ... END_OF_DOCUMENT_TOKEN_TO_BE_REPLACED

Iranians do not want an Islam that interferes. They are fed up with a system that manipulates people with simple promises of salvation and anti-Western propaganda. Islamic ... END_OF_DOCUMENT_TOKEN_TO_BE_REPLACED

"The Voice of Dust and Ash" draws us into the life and times of Iranian maestro Mohammad Reza Shajarian with passion and joy, focusing on the man who stood, and still stands, for ... END_OF_DOCUMENT_TOKEN_TO_BE_REPLACED

November 2022 sees the Arab world firmly in the spotlight with the COP27 in Egypt and the FIFA World Cup in Qatar. Public trust in MENA governments is weak, thanks to their ... END_OF_DOCUMENT_TOKEN_TO_BE_REPLACED

In Iran, two famous actresses, Hengameh Ghaziani and Katayoun Riahi, were arrested recently. These days anyone who shows solidarity with the protesters is a target to be silenced ... END_OF_DOCUMENT_TOKEN_TO_BE_REPLACED
Author:
Amir Hassan Cheheltan
Date:
Mail:
Send via mail

END_OF_DOCUMENT_TOKEN_TO_BE_REPLACED
Social media
and networks
Subscribe to our
newsletter