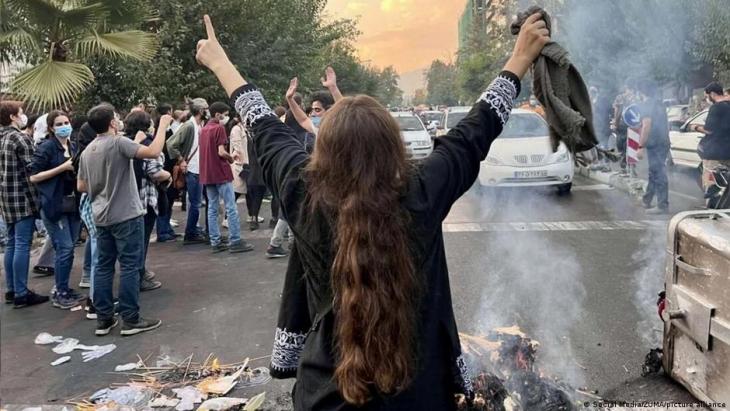 Protests in Iran
On the eve of a new world era?

Just as the Islamic Revolution fundamentally changed Iran 43 years ago and had an impact far beyond the country's borders, the current wave of protests sweeping the country is set to change more than just Iran. The era of political Islam is coming to an end. By Ali Sadrzadeh

It is not just Iran that has arrived at a historic turning point. The world has too. The death of Mahsa Amini has already irrevocably changed Iran.

Four days after the start of protests, the ailing 84-year-old Ayatollah Ali Khamenei just about managed to utter the following sentence in what remains his most recent address to date: "When one is in the midst of events, it is not possible to have an overview of what is happening." How true. This sentence is just ten days old and it is the only one spoken by the most powerful man in Iran about the death of the 22-year-old Iranian woman Mahsa Amini, which has moved people around the world. People can interpret this silence however they like: it could be an expression of fear, surprise or – as Khamenei himself says – a lack of overview. The events themselves continue unabated, becoming bloodier by the day.

Be it the Taliban, Islamic State, al-Qaida or even the recent Islamisation of Turkey by Erbakan and Erdogan, all these developments were Sunni responses, alternative political models to the Shia revolution in Iran. Just like the October Revolution in Russia in 1917, the mullahs' seizure of power in Iran 43 years ago was undoubtedly a world revolution. With the recent protests, the world is coming to the end of political Islam as we know it. It is by no means an exaggeration to say that the Iran after Mahsa's death will be very different to the one that came before it. Nevertheless, much remains uncertain. 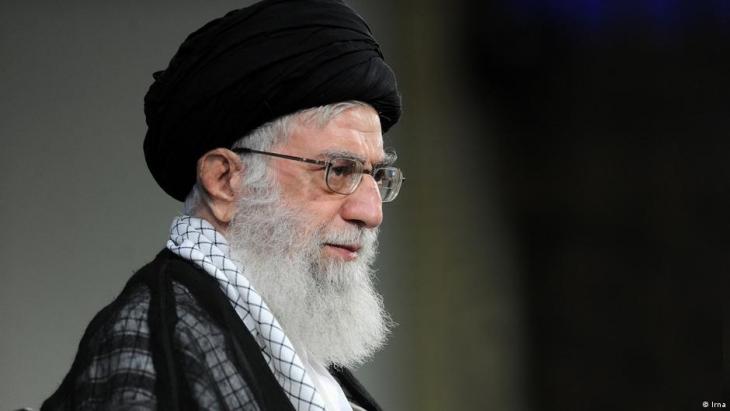 Are the days of Iran's Supreme Leader Ali Khamenei numbered? On the day Mahsa died, the New York Times reported that Khamenei had cancelled all meetings and public appearances in the previous week after falling seriously ill. It went on to say that he was under observation by a team of doctors, according to four people familiar with his health situation. Thanks to the Internet, the news spread like wildfire. After two days of official silence, the press office of the Revolutionary Guards announced that the Supreme Leader would soon be making an appearance. Two days later, he made a brief speech in a quiet voice while standing up: "When one is in the midst of events, it is not possible to have an overview of what is happening." It is the only thing Iran's most powerful man has said so far about the death of Mahsa Amini

Who are the people taking to the streets?

Much is being written at the moment about who the people taking to the streets of Iran are and why the image of Mahsa Amini has become the symbol of a pre-revolutionary state. Some of it is useful, some of it informative, some of it banal. But what about the people on the other side? How are the powers-that-be reacting? And in what direction do will they move?

Different people are demonstrating on the streets for a wide variety of reasons. The pent-up rage of four decades of diverse, legally sanctioned discrimination is spilling out onto the streets. A "We" has risen up against the system – a system in which women, religious and national minorities and indeed anyone who has different ideas about the way they want to live suffer.

The people are protesting against an order in which incompetent and thoroughly corrupt rulers want to cling to power with lies, propaganda, brutality and taqiyya, the Shia art of dissimulation – no matter what the cost. Whether the "We" on the streets will overcome the system of degradation and discrimination depends on the powers that be.

For 33 years, Ayatollah Ali Khamenei has officially been the Supreme Leader of this "republic" and commander in chief of its armed forces. In over three decades of his leadership, he has seen much unrest and many protests against his rule, peaceful and radical alike. In 2009, over three million people took part in a silent march against the re-election of President Mahmoud Ahmadinejad. "Where is my vote?" was the rallying cry of protesters at the time.

This protest was more or less inherent to the system. However, at the end of several months of rebellion, Khamenei ordered a crackdown. It is well documented what the outcome was: hundreds of people were killed and injured and thousands were arrested.

[Translation: "Protests in #Iran – in the video security forces, firing shotguns at random, are trying to stop protesters from shouting anti-regime slogans from their homes. But the slogans do not stop."]

Ten years later, when tens of thousands took to the streets in over 80 cities across the country, shouting radical slogans in protest at rising prices, Khamenei did not hesitate. He very quickly gave orders for the Internet to be shut down all over the country and for massive violence to be used. When the dust settled, it was discovered that the security forces had killed at least 1,500 protesters and arrested thousands in the space of ten days.

His will is done

In short, the will of the Supreme Leader determines where and how a protest ends and whether or not demonstrations – be they peaceful or radical – achieve anything. The constitution grants Khamenei power that is almost as absolute as his own will for power. It is unclear how long he will be able to enforce his will. Probably not that much longer.

On the day Mahsa died, the New York Times reported that Khamenei had cancelled all meetings and public appearances in the previous week after falling seriously ill. It went on to say that he was under observation by a team of doctors, according to four people familiar with his health situation.

According to the New York Times report, the Ayatollah had undergone surgery the previous week for bowel obstruction after suffering extreme stomach pains and high fever. It said that the four people who had confirmed the report, two of whom were based in Iran, including one who had close ties with the country's Revolutionary Guards, had asked for anonymity for discussing such a highly sensitive issue as Ayatollah Khamenei's health.

Thanks to the Internet, the news spread like wildfire. After two days of official silence, the press office of the Revolutionary Guards announced that the Supreme Leader would soon be making an appearance. Two days later, he did indeed appear and, for the first time in his long rule, made a brief speech in a quiet voice while standing up. It was then that he uttered the above-mentioned sentence about being in the midst of events.

The Iranian press subsequently crowed that this address was proof that the Western press had been lying. The New York Times then wrote that despite – or perhaps because of – this bizarre appearance, it stood by its reports about Khamenei's health and stressed their correctness.

Kurdish women in Northern Syria cut their hair and burn their headscarves in solidarity with the women of Iran and in protest of the murder of their Kurdish sister Mahsa Zhina Amini.#MahsaAmini #ZhinaAmini pic.twitter.com/aKJ21gbCns

The son, the system and the future

Regardless of how ill or how well he is, or how long he has to live, Khamenei wants more than just to save the few years of rule he has left. His priorities are also his Islamic order and – more importantly – his successor.

"Mojtaba, you should die and not become leader" ("مجتبی بمیری رهبری را نبینی") are words currently being chanted on the streets of Tehran. Mojtaba is Khamenei's favourite son, and his will for power seems to be as boundless as his father's. In line with his father's system, Mojtaba is said to be equipped with sufficient brutality: he is equally as fanatically anti-Western as his father – at least according to those who know him well. One can only guess what the future holds for the men and women of Iran.

Khamenei Senior is currently experiencing a new phase of his rule that he hadn't anticipated. Not only he, but almost all those who know Iran well – including renowned sociologists and political scientists – were taken by surprise and are asking themselves how and why this eruption came about.

Given the rampant inflation, the rising unemployment and the lack of prospects, experts were expecting the poorest of the poor to rise up in hunger in the near future – the middle classes, after all, have been completely neutralised both economically and politically. However, no one protesting about the death of Mahsa Amini is talking about work, bread or inflation.

Mahsa was a Kurdish woman and the chant "Woman, life, freedom" ("زن، زندگی، آزادی ") started in Iranian Kurdistan and reverberated around the country – and around other regions with other minorities and among Balochs, Arabs and Azeris – so loudly that it could not be ignored. And that says a lot about solidarity across ethnic boundaries.

Education for girls and women is still possible in Afghanistan, says Reinhard Eroes of the Kinderhilfe Afghanistan initiative. In interview with Elisa Rheinheimer, he talks about ... END_OF_DOCUMENT_TOKEN_TO_BE_REPLACED

A lawmaker in Pakistan's rugged northwest was sipping tea with voters when his phone chirped to life – the Taliban were calling with a demand for 'donations'. "We hope you won't ... END_OF_DOCUMENT_TOKEN_TO_BE_REPLACED

Cries of "Benghazi!" still resonate across the USA ten years after a deadly terrorist attack in Libya killed the U.S. ambassador and three other Americans. Ethan Chorin re-tells ... END_OF_DOCUMENT_TOKEN_TO_BE_REPLACED

Sufism has fluid boundaries. Just like Islam, Sufism is inconceivable without its late antique roots. Then again, it has also exerted an influence on Hinduism. Moreover, the Sufic ... END_OF_DOCUMENT_TOKEN_TO_BE_REPLACED

Journalist Waslat Hasrat-Nazimi was forced to flee Afghanistan with her family as a child and grew up in Germany. To mark the publication of her book "The Lionesses of Afghanistan ... END_OF_DOCUMENT_TOKEN_TO_BE_REPLACED

One year ago the Taliban returned to power, seizing Kabul; the U.S. and its allies made a panicked exit from the country. Of all the books written on the subject, four stand out ... END_OF_DOCUMENT_TOKEN_TO_BE_REPLACED
Author:
Ali Sadrzadeh
Date:
Mail:
Send via mail

END_OF_DOCUMENT_TOKEN_TO_BE_REPLACED
Social media
and networks
Subscribe to our
newsletter