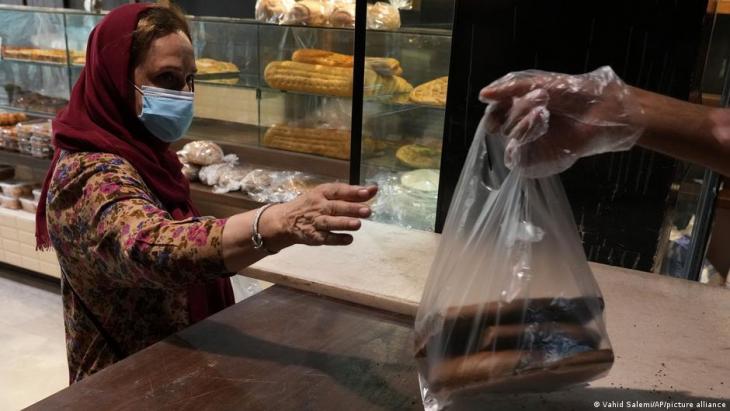 Since the government cut subsidies for food, prices in Iran have skyrocketed. Protests that broke out in Khuzestan province are now spreading across the Islamic Republic. By Sepehr Lorestani

Over the past two weeks, Iran's government has adopted two measures for which it had been campaigning in recent months. On 7 May, it was announced that Iranian citizens in need of government assistance to counteract rampant inflation would each receive a handout of between 300,000 and 400,000 tomans (about 8 to 12 euros) for two to three months. According to official figures, these state funds will benefit 23 million families, or more than 72 million Iranians out of a total population of 85 million.

The aid package is designed to compensate for price increases resulting from the abolition of the "preferred exchange rate" that previous governments had implemented for importers of staple foods. Prior to 10 May, one U.S. dollar cost 4,200 tomans at this official exchange rate, compared to 30,000 tomans on the open market.

Now the government has repealed the special rate, forcing importers to obtain foreign currency on the open market for their purchases abroad. The main motivation for this problematic decision was that many importers took advantage of the preferred exchange rate, but did not actually import the goods for which they had received the cheap foreign currency. Instead, they traded in more profitable luxury goods.

Many even took out large loans in order to exchange the money for foreign currency at the preferential rate and then sell it profitably on the open market without importing anything at all. Some hoarded the cheap dollars and euros in foreign accounts. The government did little to hinder this. It is an open secret that most of the offenders are close to the inner circle of power in the Islamic Republic. 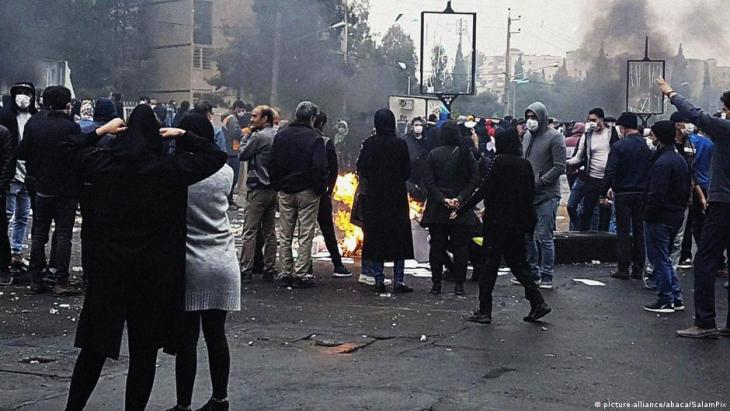 Back in 2019, Iran saw nationwide protests over an increase in the price of petrol. The image shows demonstrators in the city of Shiraz. Due to the ongoing economic crisis, the Iranian government had rationed petrol and at the same time increased the previously heavily subsidised prices for fuel by more than 50 percent. Even then, the protest against the price hike quickly turned into political slogans against the government and Supreme Leader Ali Khamenei. The security forces brutally put down the protests. It is estimated that some 1500 people lost their lives, while thousands were imprisoned

People should be prepared for price increases

On 10 May, government officials addressed the increase in prices for basic foodstuffs in separate broadcasts on state television. They all stressed that prices for bread, fuel and medicines would however remain stable. Iran's interior minister, Ahmad Vahidi, announced that the price of eggs, poultry, cooking oil and dairy products would increase, as producers or importers of these products had previously received government subsidies – for example via the "preferential exchange rate".

These subsidies had now been discontinued, so the population should be prepared for a "reasonable increase" in the price of these foods, Vahidi explained. State aid of about ten euros per month would compensate, he said. Vahidi went on to promise: "There is no reason for other products to become more expensive." The Interior Minister prohibited taxi drivers and public transport operators from raising fares.

But it was too late. The announcement that subsidies for certain foodstuffs would cease had already prompted steady price increases weeks ago. On 5 May, IRIB-News, the state broadcaster's news website, quoted a citizen as saying: "The removal of subsidies for flour has also made other products more expensive. Until a week ago we bought pita bread for 600 tomans per kilo, now we have to pay 3,000 tomans. A packet of noodles used to cost 8,000 tomans; now we pay 28,000."

Prices for most food items are rising at unprecedented rates. Nobody knows which products will be more expensive the next day, so people hoard anything that still seems reasonably priced. A video circulating on the Internet portrays the current plight: people are seen "looting" a supermarket – allegedly in the town of Ghazvin. It is hard to tell whether they are really looting the store, though, or whether they intend to buy all the goods being hastily stuffed into plastic bags.

A new wave of protests

The government blames the inflation mainly on the war in Ukraine and the economic downturn since the advent of the COVID-19 pandemic. President Ebrahim Raisi also recently laid the blame for the country's economic woes on the previous government. For decades, experts had warned against retaining the "revolutionary economy" that had led Iran into international isolation.

Iran's Supreme Leader Ali Khamenei refers to the country's economy, on the brink of ruin, as a form of "economic resistance" against the West and against Israel. This attitude has led to devastating sanctions being placed on Iran in recent decades, which mainly harm the population, not the financially powerful ayatollahs and their institutions.

The consequence has been almost weekly protests by poorer sections of the population: workers, teachers, pensioners and other disadvantaged members of Iranian society. But even the two nationwide protests in 2017 and 2019, which left numerous people dead, injured or imprisoned, failed to move the regime to finally relinquish its hostility to the West in the best interests of its own people.

A new wave of protests is already underway. It began on 10 May in Khuzestan province and is slowly reaching other parts of the country. Iran's official news agency IRNA confirmed on 12 May that protests were taking place in towns across the country and that demonstrators had been arrested.

According to IRNA, the protests were put down. However, that same evening, people in the towns of Fashapooyeh, Andimeshk, Dezful, Izeh, Dorud, Shahrekord and Yasuj also took to the streets chanting slogans against the regime. The rallies start out as protests against rising food prices and quickly turn political. In videos on social media, people chant in unison against Ayatollah Khamenei and President Raisi. Warnings from security officers and, in some cases, gunshots can be heard. IRNA reports that 15 protesters were arrested in Dezful alone and seven in Yasuj.

Yet it is doubtful whether these measures will end the protests. Because prices will continue to spiral and the poor will take to the streets. The government-allied news agency ILNA, which specialises in issues such as labour rights, wrote on 5 May: "Workers' wages are up 57 percent this year, but in the last two months, the average increase in food prices alone has been more than 200 percent. That represents a 150 percent drop in real wages."

Last Friday, the powerful ayatollah and Friday preacher for the capital Tehran, Ahmad Khatami, likened the Iranian economy to a sick person and called the government's measures "urgently needed surgery". Although surgery is painful, it can heal the sick, he said. He omitted any mention, however, of what caused the "illness" in the first place, namely the hostility of the ruling Islamists toward anything un-Islamic. As long as there is no antidote to that enmity, the Iranian economy and thus the majority of Iranians are doomed to suffer.

Sepehr Lorestani is the pseudonym of an Iranian journalist.

Young women are driving forward the protests against the Iranian regime, which have been going on for months. Literature provides clues as to why that should be, and why the ... END_OF_DOCUMENT_TOKEN_TO_BE_REPLACED

Visiting the country of her parents, murdered by the Iranian regime in 1998, German-Iranian artist Parastou Forouhar finds a changed society: hopeful, strong and courageous, ... END_OF_DOCUMENT_TOKEN_TO_BE_REPLACED

Ballet performances are prohibited in Iran. In her film "1001 Nights Apart", director Sarvnaz Alambeigi documents the history of dance in the Islamic Republic. By Fahimeh Farsaie END_OF_DOCUMENT_TOKEN_TO_BE_REPLACED

Iran's president Ebrahim Raisi is overseeing an unyielding crackdown. The current situation grimly echoes his role in a purge of political prisoners in 1988 END_OF_DOCUMENT_TOKEN_TO_BE_REPLACED

Chinese President Xi Jinping's visit to Saudi Arabia in December 2022 may have rattled Washington, but it simply highlighted the Arabs’ desire to diversify their foreign relations ... END_OF_DOCUMENT_TOKEN_TO_BE_REPLACED

There are signs of an imminent normalisation of relations between Turkey and Syria. This would allow Erdogan to score political points domestically before the upcoming elections ... END_OF_DOCUMENT_TOKEN_TO_BE_REPLACED
Author:
Sepehr Lorestani
Date:
Mail:
Send via mail

END_OF_DOCUMENT_TOKEN_TO_BE_REPLACED
Social media
and networks
Subscribe to our
newsletter