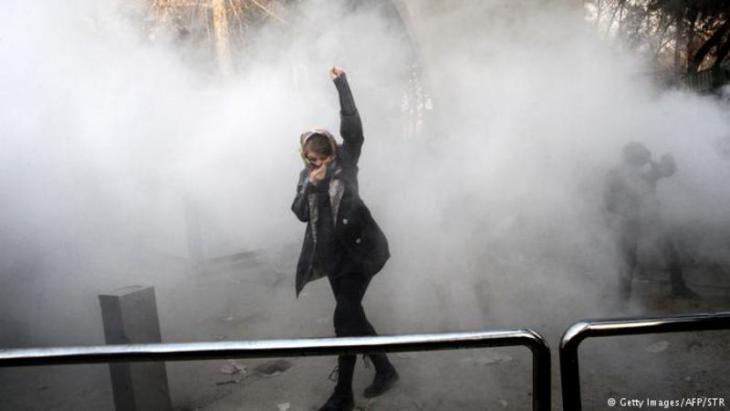 Protests in Iran
The spark that turned into a wildfire

In this essay, Ali Fathollah-Nejad looks at how the ongoing unrest in Iran is shining a light on the structural social and economic injustices inherent in the Islamic Republic and shows just how much trust in Rouhani's government has been eroded

The causes of the uprising that has been rocking the Islamic Republic of Iran for over a week now are unsurprisingly both structural and contingent. Initially kicked off by the economically dispossessed youth and joined by lower sections of the middle class, students and also some pensioners, it has reached an unprecedented geographical scope with protests spanning 70 mainly smaller cities and towns in all four corners of the country. According to the authorities, 42,000 people, 90 per cent of whom are under the age of 25, have taken part, while the real number may be higher. They have been met by myriad methods of repression by the state's security apparatus, leaving over 20 people dead (again merely an official figure), 1,000 jailed and an uncounted number injured.

Besides the structural factors that have been an almost constant feature of the Islamic Republic's rule, the past months and weeks have added a new level of discontent with the regime as a whole, which led me to speculate that the recent waves of protests "may only be a forerunner of more to come".

The immediate trigger was a protest staged by Rouhani's right-wing conservative opponents in Mashhad against the president's economic performance that spiralled out of control. Then, like a wildfire, it ignited the entire country with a combination of social justice and anti-regime slogans. All this took place against the background of a wave of protests in the preceding months and weeks by workers, pensioners, teachers and students.

Since March 2016, Iran has seen 1,700 social protests, according to the Islamic Revolution Devotees Society (Jamiyat-e Isargara-e Enqelab-e Eslami), a conservative party of which Mahmoud Ahmadinejad was a founding member. Over the course of 2017, hundreds of protests took place by workers, pensioners, teachers and students. Labour protests continued due to unpaid salaries, neoliberal economic policies and resistance to labour organisation, which were confronted with harsh repression by security forces and sanctioned by arbitrary lay-offs.

While waves of such protests had already taken place throughout the Ahmadinejad presidency, President Rouhani's stance against labour rights and a decent minimum wage only exacerbated the situation. Over the course of 2017, pensioners and teachers staged many protests against unpaid pensions and low salaries, yet their concerns were ignored by the authorities. The December 7 Student Day saw a wave of university protests with students demanding social justice and an end to political tutelage, while pointing out that the climate for activism had become even worse. 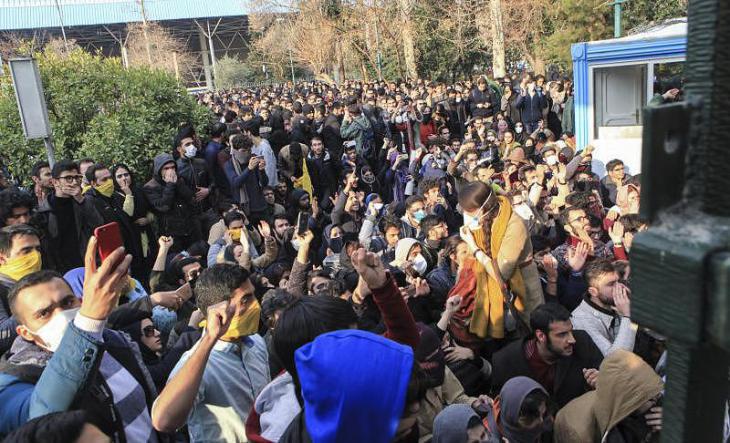 Boiling point: according to Ali Fathollah-Nejad, protests in Iran are nothing new. Even though there were waves of protests throughout the Ahmadinejad presidency, President Rouhani's stance against labour rights and a decent minimum wage exacerbated the situation. "Over the course of 2017, pensioners and teachers staged many protests against unpaid pensions and low salaries, yet their concerns were ignored by the authorities". Pictured here: students protesting on the grounds of the University of Tehran on 30 December 2017

Disillusionment with all areas of government

A number of key events over 2017 led popular disillusion with the regime as a whole to reach a new level. In May, after a deadly mine explosion in northern Iran, the miners' rage descended upon President Rouhani, when angry workers attacked his armoured vehicle when he wanted to visit the site. In mid-November, the heavy earthquakes shaking the country demonstrated to all Iranians the regime's utter neglect for their most vital needs, from the social housing that was built under corrupt circumstances during the Ahmadinejad years and had abruptly collapsed, burying innumerous people under the rubble, to the Rouhani administration's hesitant reaction to provide aid to the victims that left many literally in the cold.

Adding the final touch to those multilayered frustrations was the Rouhani administration's announcement of its upcoming annual budget that defied the president's bold promises to finally tackle the issue of social justice. Instead, major sums were devoted to religious foundations, run by both the regime's conservative and reformist camps, as well as the Islamic Revolutionary Guards Corps (IRGC). This led to fierce criticism of the proposed budget on social networks. Disenchanted Rouhani voters then started a Twitter campaign against their erstwhile "bearer of hope" with the hashtag "I regret" (Pashimanam). Thus, for many, Rouhani's budget plan had evaporated any hope that a turn towards social justice and a weakening of authoritarian structures might be on the horizon.

World-famous Iranian film director Jafar Panahi has been incarcerated for several months, even though Iran's Supreme Court overturned the verdict against him. Now, he has gone on ... END_OF_DOCUMENT_TOKEN_TO_BE_REPLACED

Short movies nominated for an Oscar often don't get wide public attention. But when one is about an Iranian girl seeking freedom from male domination by taking off her veil, ... END_OF_DOCUMENT_TOKEN_TO_BE_REPLACED

Young women are driving forward the protests against the Iranian regime, which have been going on for months. Literature provides clues as to why that should be, and why the ... END_OF_DOCUMENT_TOKEN_TO_BE_REPLACED

Visiting the country of her parents, murdered by the Iranian regime in 1998, German-Iranian artist Parastou Forouhar finds a changed society: hopeful, strong and courageous, ... END_OF_DOCUMENT_TOKEN_TO_BE_REPLACED

Ballet performances are prohibited in Iran. In her film "1001 Nights Apart", director Sarvnaz Alambeigi documents the history of dance in the Islamic Republic. By Fahimeh Farsaie END_OF_DOCUMENT_TOKEN_TO_BE_REPLACED

END_OF_DOCUMENT_TOKEN_TO_BE_REPLACED
Social media
and networks
Subscribe to our
newsletter