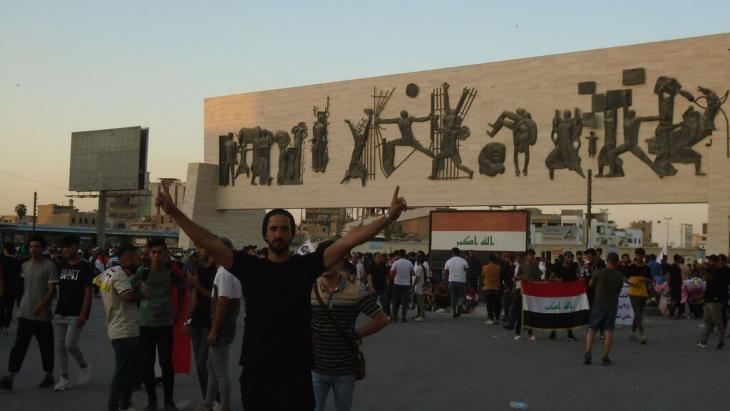 Protests in Iraq
The streets speak for themselves!

Once again, political deadlock is driving thousands of Iraqis to Tahrir Square. They want new elections, but the parliament refuses to dissolve. Elected representatives are now being protected from the people. Birgit Svensson reports from Baghdad

These days, whenever the Iraqi parliament is in session, the bridges over the Tigris are closed and traffic in Baghdad comes to a standstill. Appointments are cancelled or postponed and many civil servants stay at home on the understanding that they would not be able to get from one side of the river to the other anyway. This has been going on since July, when supporters of the influential Shia cleric Muqtada al-Sadr broke into parliament twice and occupied it for days.

They were demonstrating against the nomination of a politician as prime minister whom they oppose. Since then, al-Sadr has withdrawn his deputies from parliament and, as he says, retired from politics. But the protests continue. A government is still not in sight one year after the early elections – with or without Sadrists in parliament.

Since the beginning of October, not only al-Sadr's supporters have taken to the streets of Baghdad, but also the Teshreenies. Thousands are commemorating the mass demonstrations that began three years ago in October ('teshreen' means 'October' in Arabic) and became known as the 'October Revolution'. Now the protest movement has resumed after a two-year break. At first, Sadrists and Teshreenies stood apart on Tahrir Square, some to the left, others to the right.

But the longer the protests continue, the more they are drawing closer together, because somehow they all have the same demands. "We want security, jobs and our civil rights", they have written on large placards. Flags emblazoned with this slogan invariably carry photos of those who died in the protests in 2019 and 2020. 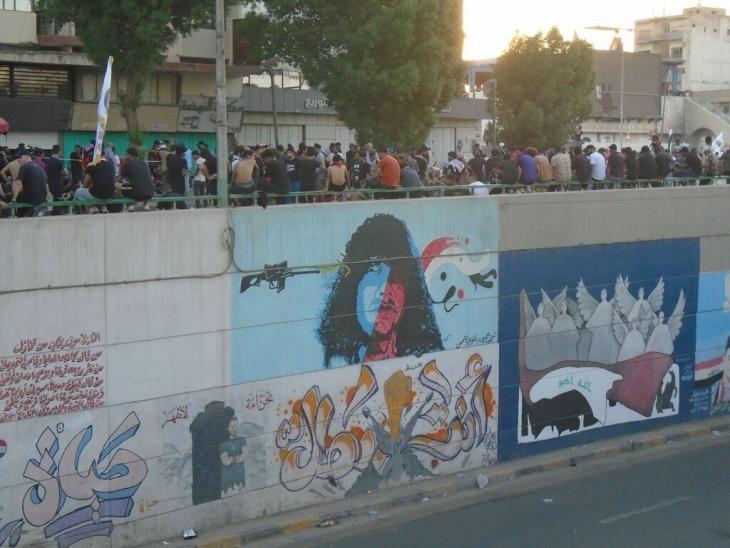 Since the beginning of October, not only al-Sadr's supporters have taken to the streets of Baghdad, but also the Teshreenies. The longer the protests continue, the more the two groups are drawing closer together, because somehow they all have the same demands. "We want security, jobs and our civil rights", they have written on large placards

Political involvement and a better future

They were Sadr's people as well as Teshreenies, mostly young Iraqis from all levels of society, who demanded political involvement and a better future. Official figures put the death toll at six hundred, the Teshreenies claim that well over a thousand died. The current mobilisation in Baghdad is meant merely as a prelude to further protests, which are expected to spread over the course of the month. That much is certain, says Alaa, a 32-year-old Baghdadi who took part three years ago.

Since then, there has been a change of government, new electoral legislation has been passed and new elections held. The first of the protest movement's demands have been fulfilled. In the interim, the Teshreenis have retreated, gone into hiding, left the country or been killed. Too many died in the protests, says Alaa. "They did everything to stifle our revolution, to silence us." There would be no change in the political system, as the protesters had demanded, no restructuring of the balance of power, allowing majorities to come through elections and not through proportional representation and the politics of patronage.

Yet the results of last October's elections looked favourable. The victor was the Shia cleric Muqtada al-Sadr, who made clever use of the October Revolution slogans. A handful of Teshreenies also won direct parliamentary mandates. But it was not enough. There would need to be a coalition. "And then the trouble began," Alaa comments on the wrangling of the last few months. "For a year now they have been going round in circles and nothing happens."

Stones fly, rubber bullets; tear gas spreads over Tahrir Square. A mortar shell explodes on the other side of the Tigris, home to the government buildings and the parliament, target of the ire of so many protesters. The one thing liable to break the deadlock would be a dissolution of the "incompetent" parliament and new elections. But parliament does not want to dissolve; the disputes among rival factions show no sign of abating. 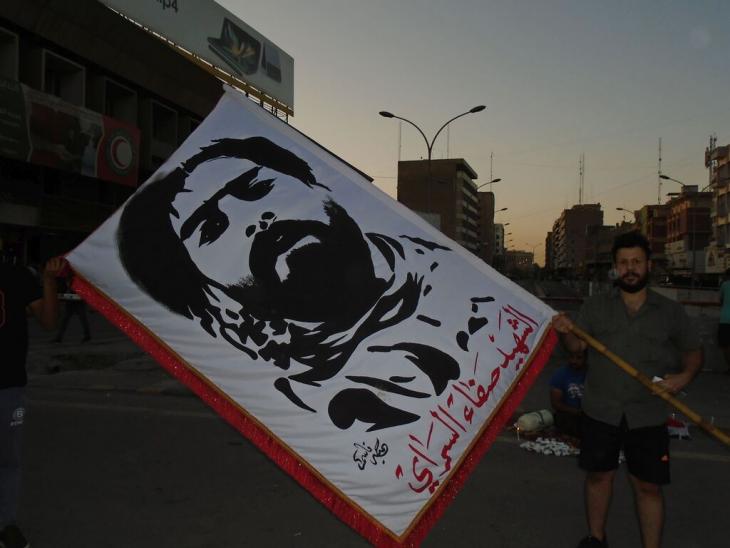 "For a year now they have been going round in circles and nothing happens“: Alaa, a 32-year-old Baghdadi took part in the protest on Tahrir Square in 2019. Now he is back with his flag. Since then, there has been a change of government, new electoral legislation has been passed and new elections held. The first of the protest movement's demands have been fulfilled. The results of last October's elections looked favourable. The victor was the Shia cleric Muqtada al-Sadr, who made clever use of the October Revolution slogans. A handful of Teshreenies also won direct parliamentary mandates. But it was not enough

Frustrated by this, election winner al-Sadr withdrew, recalling his parliamentarians. Those who are against reform and continue to advocate "more of the same" remained behind. "The streets speak for themselves," al-Sadr shouted to his opponents as he left. And that is what has happened. Now the people's representatives are being protected from the people. Prime Minister Mustafa al-Kadhimi has called for restraint. The Iraqi constitution gives every Iraqi the right to demonstrate peacefully, but he will use the security forces if there is violence, reads a statement from his office circulated in all media.

"We want the fall of the regime," some women shout just before dawn, just as they shouted two years ago. And just as they stopped protesting two years ago, so they continue now: Basra, Diwanija, Nasserija, Babylon, there are demonstrations everywhere. "We will not leave until all our demands are met, we want a future!" The next big demonstration is scheduled for 25 October.

Khaled is scared. His eyes wander back and forth, searching the whole square. Shia militiamen kidnapped him two years ago, blindfolded him and put him in a dungeon for ten days, where the Baghdadi doesn't know exactly. It smelt of earth, so it could not have been directly in the city, he guesses. His mobile phone was taken and the numbers on it called.

The kidnappers demanded a ransom from his family, first an unspecified sum, then a million Iraqi dinars (about 700 euros), after his brother claimed they had no more money. When Khaled was released somewhere in Baghdad, he felt like an old man at the end of his life. "But here I am again," says the 28-year-old standing tall. "I can't help it." At some point, things must surely get better.

At the edge of the protest on Tahrir Square stands a small, slender woman dressed all in black with empty eyes. "My daughter was killed here two years ago," she says in a low voice. She was a medical student and was caring for the injured. A rubber bullet hit her on the temple, she says. "She died instantly." Now the mother is here to be close to her daughter. The most bitter thing for her is that no one has been held accountable for the Teshreenies who died, their "killers" have gone unpunished. So far there have been no deaths on Tahrir, most of the eighty-six people hurt have only received slight injuries.

The Kurds are under attack from two sides: from Turkey, and from Iran. The situation in their territories in northern Iraq is becoming increasingly desperate. Birgit Svensson ... END_OF_DOCUMENT_TOKEN_TO_BE_REPLACED

November 2022 sees the Arab world firmly in the spotlight with the COP27 in Egypt and the FIFA World Cup in Qatar. Public trust in MENA governments is weak, thanks to their ... END_OF_DOCUMENT_TOKEN_TO_BE_REPLACED

Thanks to climate change, the Middle East is heating up faster than any other part of the world, putting the region's ancient pyramids, castles, holy and other heritage sites at ... END_OF_DOCUMENT_TOKEN_TO_BE_REPLACED

In the run-up to the COP27 global climate summit, hosted by Egypt in November, it is worth noting that little rainfall, aggressive heatwaves and worsening drought make the Middle ... END_OF_DOCUMENT_TOKEN_TO_BE_REPLACED

Hundreds of porters, locally known as ‘kolbars’, cross the mountainous border between Iran and Iraqi Kurdistan all year round. With Iran’s economic crisis deepening, ever more ... END_OF_DOCUMENT_TOKEN_TO_BE_REPLACED

The clashes in Baghdad between supporters of Muqtada al-Sadr and pro-Iranian militias show that an intra-Shia power struggle is in full swing. An analysis from Cairo by Karim El- ... END_OF_DOCUMENT_TOKEN_TO_BE_REPLACED
Author:
Birgit Svensson
Date:
Mail:
Send via mail

END_OF_DOCUMENT_TOKEN_TO_BE_REPLACED
Social media
and networks
Subscribe to our
newsletter