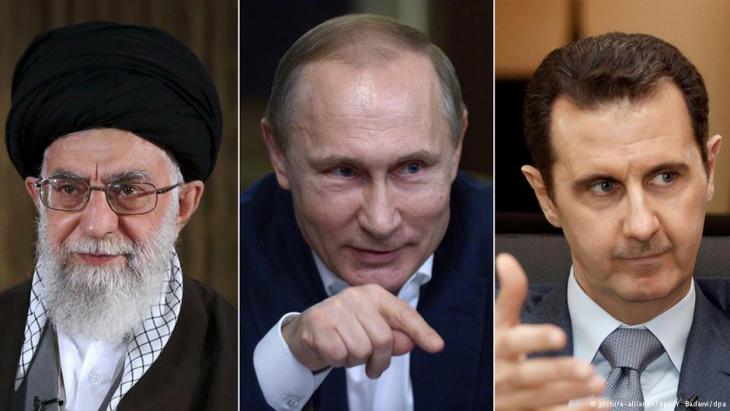 Putin, Assad and the fall of Aleppo
Masters of disinformation

While the attention of the world is focused on events in Aleppo, Assad and his allies are talking about the "liberation" of the city. Some believe him, left wing anti-imperialists for example. By Emran Feroz

The Syrian conflict has several narratives, all of which are jostling for media supremacy. In the end, the one that is being heard most clearly is that of Bashar al Assad. If this were not the case, he and his Iranian and Russian allies would not have been able to recapture Aleppo in the shadow of worldwide disinterest.

There are many reasons why it has happened like this. One is that those left-wingers in the West, who often like to present themselves as being against war and in favour of peace, have taken sides with Assad and Putin. What we are talking about here are primarily groups that believe themselves to be "anti-imperialist", "critical" or "alternative" – and who are presently celebrating the capture of Aleppo as a "liberation".

As critical as these groups supposedly are, they have not recently been focusing on Russian bombs or on the horrors perpetrated by pro-Assad foreign militia, but on those people trapped in eastern Aleppo who were circulating calls for help and farewell messages.

Their particular focus has been on Bana Alabed, a seven-year-old child from eastern Aleppo with more than 300,000 followers on Twitter. For the "critical masses" Bana was not real. She was viewed simply as a propaganda instrument, created by operatives probably located somewhere in Turkey or Qatar. A detailed report by the research network "The Bellingcat" however confirmed Bana's existence and her whereabouts in eastern Aleppo.

The writers reminded critics of a number of facts, for example that Bana's profile was mainly managed by her mother, a qualified journalist and teacher who speaks English, or that even in amongst the ruins of the city, it was still possible to access power and the Internet.

Indeed, Bana′s existence can no longer be belied. She and her family have recently managed to leave Aleppo safely, with countless verified photos now circulating of Bana and her parents.

Whether this will bring the critics around, is another question. Regardless of whether they come from the left or the right of the spectrum, most have long ago formed their own picture of the conflict, in which they believe anything Assad and Putin say. The commentaries posted beneath videos of interviews with the two leaders often speak volumes.

This is why Assad's victory in Aleppo – how can it be otherwise – is being viewed as a success against US aggression in the country. That it is mainly Russian bombs that have destroyed hospitals in Syria in recent weeks and months, is not only passed over as a minor detail. Instead, the attacks are coldly justified by for example maintaining that "terrorists" are using the clinics as "shields".

When a clinic run by the organisation Doctors Without Borders was attacked by US fighter jets last year in the Afghan city of Kunduz, the "terrorists" story was not deployed – and rightly so. The same position can also be observed with regard to the devastating war in Yemen, led by Saudi Arabia with significant backing from Washington. But as soon as the bombs come from Moscow, many anti-imperialists and supposed peace activists apply a different standard. They are silent, or jubilant. 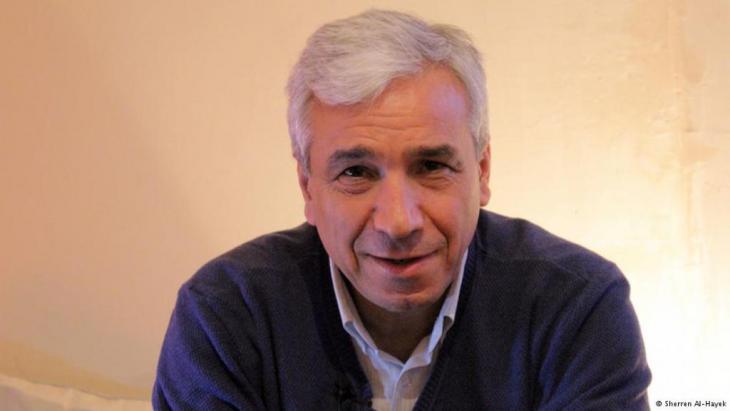 Syria's left-wing viewed with suspicion: the Syrian intellectual Yassin al-Haj Saleh was incarcerated by the Assad regime for 16 years for being a member of the Communist Party. But even Saleh, who was tortured by the regime for his political convictions and continues to lambast the crimes of Assad's power apparatus in interviews, is regarded by many Western left-wingers as yet another distorter of the truth

This means the Western Left has de facto accepted the rhetoric of those it has always criticised. Once construed by Assad, Putin and their propaganda machines, the "War on Terror" suddenly makes sense. The most important thing is that it jives with their own world view. Yet what is suppressed in this context is also the fact that following the 9/11 attacks, the CIA co-operated closely with the Syrian intelligence agency – primarily with regard to the brutal torture of "terror suspects".

In Syria, the "good" war against terror looks something like this: all Syrians who are against Assad are cast as "terrorists", "tools of US imperialism" or "puppets" of Saudi Arabia or Turkey. They have practically no will of their own, they have not experienced any misery and are completely dehumanised. Assad himself on the other hand is seen as the legitimate president of a sovereign state, as a "quiet, thoughtful man", as Jurgen Todenhofer described him.

At the same time, his foreign accomplices, without whom he would have fallen long ago, are being obscured or relativised. This not only relates to the decisive backing by Iran and Russia, but also the many mercenaries and militias from Lebanon, Iraq, Pakistan and Afghanistan.And now this narrative has also been taken up by the South American left wing. The Bolivian President Evo Morales has for example described Assad several times as the "anti-imperialist president" whom the US is trying to topple.

The stance of South American states that have themselves lived through a left-wing liberation struggle became particularly clear at the latest UN vote on measures to protect civilians in Syria. Cuba, Bolivia, Nicaragua and Venezuela were among the 13 nations who voted against it, siding with Moscow, Tehran and the Assad regime.

The discourse is also ignoring the voices of the Syrian left wing. The best example of this is the Syrian intellectual Yassin al-Haj Saleh. He was incarcerated by the Assad regime for 16 years for being a member of the Communist Party. But even Saleh, who was tortured by the regime for his political convictions and continues to lambast the crimes of Assad's power apparatus in interviews, is regarded by many Western left-wingers as yet another distorter of the truth. 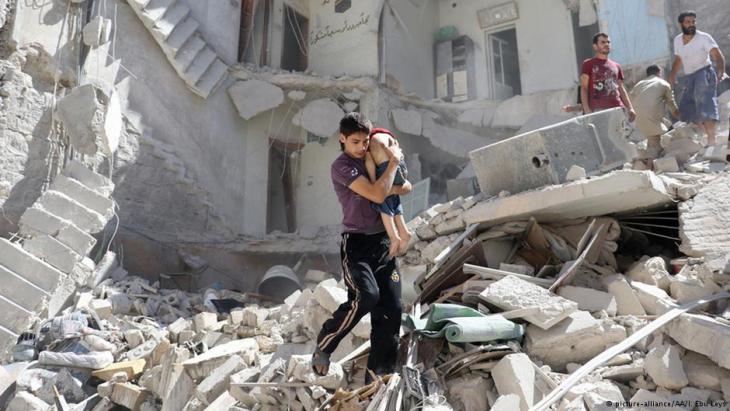 Sheer hypocrisy: "when a clinic run by the organisation Doctors Without Borders was attacked by US fighter jets last year in the Afghan city of Kunduz, the "terrorists" story was not deployed – and rightly so. The same position can also be observed with regard to the devastating war in Yemen, led by Saudi Arabia with significant backing from Washington. But as soon as the bombs come from Moscow, many anti-imperialists and supposed peace activists apply a different standard. They are silent, or jubilant," writes Feroz

Saleh is himself unlikely to be surprised by this reaction, as he has repeatedly described left-wingers in the West as ideologically blinded actors who refuse to believe in the revolution. This, although the conflict is ultimately a result of inequalities imposed by a small, brutal power elite that has repressed the nation's majority population for decades.

But now the dictator can rub his hands in satisfaction. His regime, with all its propaganda lies, has won. Bashar al Assad has managed to get both the Left and the Right behind him. It is no longer a secret that for years now, right-wing extremist groups and parties such as the Austrian FPO, the Italian Forza Nuova and the British BNP have been very active in their support of Assad.

Among those participating in the right-wing congress "Verteidiger Europas" (Defenders of Europe), which took place in the Austrian city of Linz in late October, was Maram Susli a.k.a. Partisan Girl, a high-profile Assad propagandist active mainly on social media.

Those who continue to get upset about referring to the dictator as a "dictator", who view every bearded Syrian as a "terrorist", or are surprised that people are radicalised in such dystopian circumstances, are more guilty than they realise.

The death of Mahsa Amini at the hands of Iran's "guardians of morality" is only the latest, tragic example – in a neverending chain of state repression and excessive police ... END_OF_DOCUMENT_TOKEN_TO_BE_REPLACED

In "Iran. Die Freiheit ist weiblich", journalist Golineh Atai describes the dogged resistance of courageous Iranian women against the Islamic Republic and the mullahs who have ... END_OF_DOCUMENT_TOKEN_TO_BE_REPLACED

Iranian artist Parastou Forouhar has lived in Germany since 1991. Full of rage, just like the protesters, she hasn't yet given up on the idea of justice. By Julia Hitz END_OF_DOCUMENT_TOKEN_TO_BE_REPLACED

Fariduddin Attar’s "The Conference of the Birds", one of the seminal works of Islamic mysticism, has recently been published in sumptuously illustrated German translation. It ... END_OF_DOCUMENT_TOKEN_TO_BE_REPLACED

The violent death of 22-year-old Mahsa Amini has achieved something the entire opposition has failed to do during the 43-year rule of the ayatollahs in Iran: almost the entire ... END_OF_DOCUMENT_TOKEN_TO_BE_REPLACED

Like Christianity, Europe's history is one of migration. Both have strong roots in the Orient and in cultures thousands of years old. Cultural historian Bernhard Braun invites us ... END_OF_DOCUMENT_TOKEN_TO_BE_REPLACED

Comments for this article: Masters of disinformation

Presently there's no war without a propaganda machine. True there has been propaganda on both sides. To be fair the anti Assad has been more active The pro Assad side has mostly criticized the anti propaganda. In the case of Bana the critics have criticized the child exploitation for a no fly zone. Unfortunately it is true.

END_OF_DOCUMENT_TOKEN_TO_BE_REPLACED
Social media
and networks
Subscribe to our
newsletter