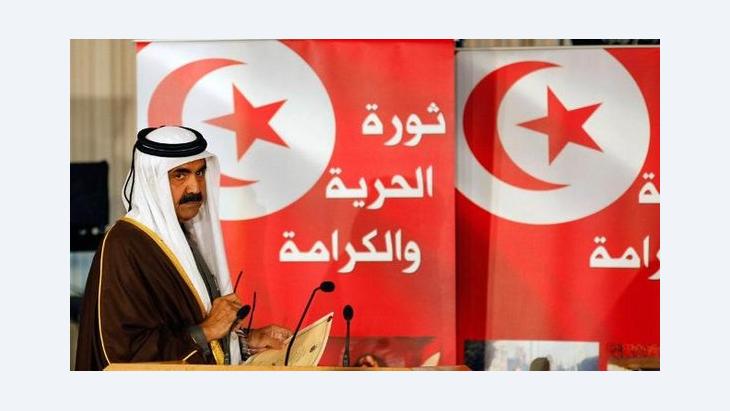 During the Arab uprisings, the emir of Qatar may well have become one of the most influential leaders in the Arab world. Stephanie Doetzer takes a look at the religious, political, social, economic and geographical factors that shape the creative foreign policy of the tiny Gulf state of Qatar

The day Libyan rebels took control of Gaddafi's headquarters in Tripoli, they raised not only their own tricolour, but also the flag of Qatar. Not so long ago, hardly anyone outside the Gulf region would have recognised the maroon and white flag of the tiny emirate. But more recently, it could be seen flying in Libya, as well as at the windows of a shelter for Syrian refugees in Northern Lebanon. The residents of the building praised Qatar for supporting the fight against Bashar al-Assad more generously than most and for having bankrolled their iftar dinners during the last Ramadan.

In fact, Syria is currently one of the emir's top priorities, with Qatar cheerleading support for the Syrian opposition: last summer, it became the first Arab country to withdraw its ambassador from Damascus, and to push for sanctions against the Assad regime; earlier this year, again it was the first Arab country to openly speak out in favour of military intervention.

Having sent considerable financial and military support to Libyan rebels, Qatar is now said to be doing the same for their Syrian counterparts. And as before, secular Arabs tend to accuse Qatar of having a pro-Islamist-bias.

At the same time, however, Qatar is a new favourite with the US. While Hillary Clinton praises Al Jazeera for broadcasting "real news", recent American TV reports have portrayed Qatar as a role model for the region. The huge American military base, which is about a 20-minute drive away from Doha, has long ceased to be a particularly controversial issue among Qataris.

As contradictory as it may sound, Qatari foreign policy has become both more Americanised and more Islamist. From a Qatari point of view, there's nothing wrong with the combination. "Qatar can speak with everybody at the same time. I can't think of any other country that can do this the way the Qataris can", says Salam Sheikh, the director of Doha's Brookings Institute, who considers this to be the reason of Qatar's success as a mediator in Sudan and Lebanon. 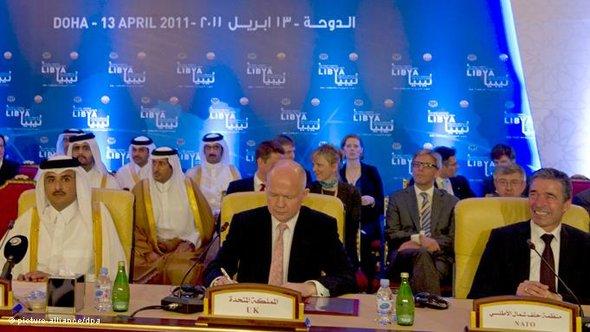 ​​"Unlike others, Qatar doesn't follow the orthodoxy of 'You are either with us or against us...'" he says. However, playing the neutral mediator is not what Qatar has been doing over the past year nor at this very point of time. While the emirate has managed to repair the traditionally tense relations with neighbouring Saudi Arabia, relations with its other neighbour, Iran, have cooled ﻿considerably.

And Qatar's growing influence in the region isn't to everybody's liking. While Sunni revolutionaries in Syria and Libya hail Qatar with indebted gratitude as a country "on the right side of history", secular powers tend to view Qatar's policies with growing scepticism. And many Shia Muslims in Lebanon and Bahrain find Qatar's new political realignment appalling.

A mish-mash of concerns

Qatari foreign policy generally arises from a mish-mash of ideological, strategic as well as security concerns, with analysts disagreeing on which factor may be the most crucial. Guido Steinberg from the German foreign policy think tank the German Institute for International and Security Affairs considers the emir of Qatar, Sheikh Hamad Bin Khalifa Al-Thani, to be the prototype of a pragmatic politician, who, as a result, has no qualms about being pro-Western and pro-Islamist at the same time.

"Sheikh Hamad has a very positive view on Islamist movements. It's a view similar to that of Yusuf al-Qaradawi, who's been living in Qatar since 1961 and who has become something of a spokesperson for the state of Qatar when it comes to religious questions," says Steinberg.

Sheikh Hamad Bin Khalifa Al-Thani is usually classified as an Arab nationalist, but his close ties to political Islam may well indicate that traditional pan-Arabism has long been replaced by various Islamist schools of thought. Instead of being mutually exclusive, both world views now seem to match.

During the Arab uprisings, Qatar has chosen to support various kinds of Islamists, ranging from Tunisian En-Nahda to Salafist movements. Iranian-backed Shia Islamists may be the only ones who cannot in this time count on Qatar's help: while other movements are seen to represent legitimate voices of the people, Shia Islamists tend to be dismissed as the "fifth column" of Iran. 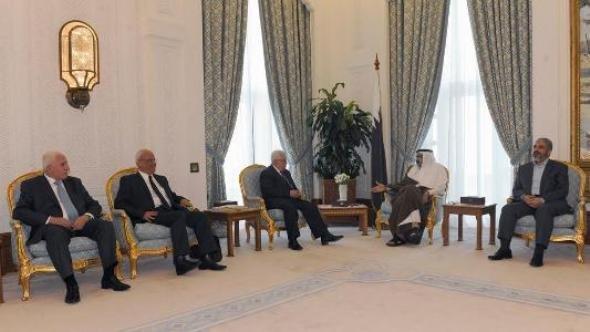 A mediator, albeit not a neutral one: according to Stephanie Doetzer, "Qatar has chosen to support various kinds of Islamists, ranging from Tunisian En-Nahda to Salafist movements. Iranian-backed Shia Islamists may be the only ones who cannot in this time count on Qatar's help"

When protests were being brutally quashed in neighbouring Bahrain, Qatar chose to remain largely silent. When it comes to uprisings with a strong Sunni–Shia component in its immediate surroundings, Qatar is more interested in maintaining the status quo than in risking revolutions.

This caution, if at odds with the country's enthusiasm for change in North Africa or Syria, is in line with its internal functioning. After all, Qatar itself is still far from being a democracy. Salman Sheikh, also a former political advisor to Qatar's first lady, describes the system as a hybrid of a traditional and a more representative model.

"The emir knows he has to rule in consultation with the other key families and tribes of Qatar. It's made possible thanks to the relatively small size of the local population. Unlike elsewhere in the Arab world, we haven't really seen demands for more representation. The thing that people crave more than anything else is to have continued prosperity and stability," he says.

Last autumn, the Qatari government took a decision that would have made European trade unionists green with envy: all government and big company employees were granted a salary rise of 60 per cent, and police and military personal of 100-120 per cent.

So far, it all seems to be running smoothly. Doha has witnessed neither demonstrations, nor unrest, and public criticism of the government is almost unheard of. Instead, Doha is the region's boomtown – and the government's top priority is to make sure it all stays that way. 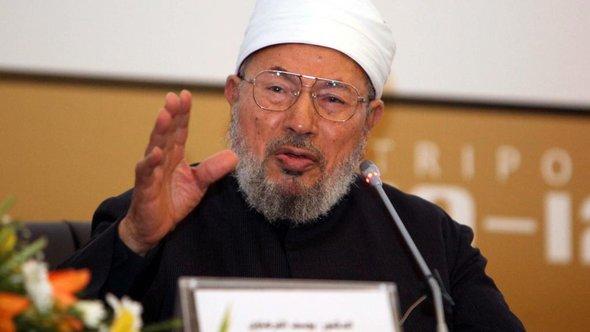 According to Guido Steinberg of the German Institute for International and Security Affairs, the Egyptian cleric Sheikh Yusuf al-Qaradawi, who reaches may people in the Arab world through his television programmes on Al Jazeera, has become a kind of "spokesperson for the state of Qatar when it comes to religious questions"

﻿But stability can't be taken for granted. Stuck between Saudi Arabia and Iran, Qatar can hardly draw envy because of its geographic location. And it is this location that accounts for a great deal of Qatar's new foreign policy.

While the world media continues to speculate about Iran's nuclear programme, Israeli submarines and American aircraft carriers patrolling the Persian Gulf suggest that decisions for an attack have already been taken.

If Iran is attacked, Qatar would face a number of serious challenges: protecting its gas fields and infrastructure and also keeping its expatriates who – from Asian construction workers to British businessmen – account for 94 per cent of the country's workforce. If they suddenly want to leave, Doha would rapidly cease to be what it is.

For now, hardly anyone wants to think about the worst-case scenario. Qatar is busy with other things: international conferences in its five-star hotels, preparations for the football World Cup in 2022 and above all, with establishing itself as a small, but crucial leader in the region.

"Qatar has become the crossroads that every Arab conflict has to pass. That's where they decide which way things are going," says one of the editors in Al Jazeera's newsroom. Big words for such a tiny country, but perhaps not much of an exaggeration.

We are in favour of human rights. But One Love armbands are self-righteous and ignore some fundamental issues. Stefan Buchen examines the debate surrounding the World Cup in Qatar END_OF_DOCUMENT_TOKEN_TO_BE_REPLACED

Past attempts to reconcile logic and belief within Islam tend to be dismissed today – not because they lack merit, but because they were politically defeated, argues Mustafa Akyol END_OF_DOCUMENT_TOKEN_TO_BE_REPLACED 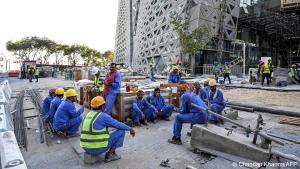 Shafeeq Saqafi paid $3 for the Argentina shirt he proudly wore when he sat with 15,000 other migrant workers in a hidden corner of Doha to watch Lionel Messi's side salvage their ... END_OF_DOCUMENT_TOKEN_TO_BE_REPLACED

November 2022 sees the Arab world firmly in the spotlight with the COP27 in Egypt and the FIFA World Cup in Qatar. Public trust in MENA governments is weak, thanks to their ... END_OF_DOCUMENT_TOKEN_TO_BE_REPLACED

Lamya Kaddor, MP for Germany’s Green Party, visited Qatar with a group of parliamentarians. In interview with Claudia Mende, she advocates a differentiated picture and urges that ... END_OF_DOCUMENT_TOKEN_TO_BE_REPLACED

END_OF_DOCUMENT_TOKEN_TO_BE_REPLACED
Social media
and networks
Subscribe to our
newsletter