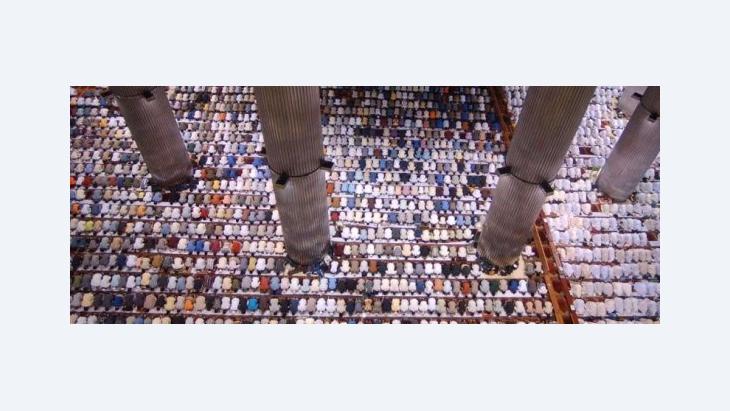 Indonesia's image as a poster child for pluralism has been tarnished – the actions of Islamic radicals are increasingly controlling the agenda. In the opinion of some observers, the moderate majority must display a greater sense of unity and overcome the authoritarian heritage of the country. By Anett Keller

A question mark is currently inflaming passions in Indonesia – especially among conservatives. "?" is the title of the latest film by the Indonesian director Hanung Bramantyo, in which the renowned filmmaker tackles some explosive issues. The plot begins with a pastor being stabbed and develops with one of the female protagonists divorcing her polygamist husband and converting from Islam to Catholicism. A Muslim man sacrifices his life to save a church from a bomb attack.

Indonesians have been flocking in droves to see the film, while protests from radical Islamist groups were not long in coming. In the large city of Bandung, the film has already been removed from cinemas on the order of the local government. The Council of Indonesian Muslims Scholars (MUI) has since demanded that the filmmaker remove all scenes in which pluralism and tolerance are positively portrayed.

Unresolved relationship between the state and religion 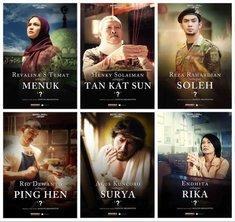 "No religion can soil another." Poster of the film "?" by the Indonesian director Hanung Bramantyo

​​Thirteen years after the overthrow of the Suharto dictatorship, the discussion raging around "?" mirrors that of the struggle within Indonesian society to find the proper place for religion in a democratic state. At issue is which interpretation of Islam, adhered to by 85 percent of Indonesians, has majority appeal.

The number of religiously motivated violent attacks have recently shown a dramatic increase. In 2010 alone, the Setara Institute for Democracy and Peace has registered 216 cases in which freedom of religion has been violated. In 59 cases, houses of worship belonging to minority groups were either attacked or threatened. In West Java in early February this year, three followers of the Ahmadiyah faith were brutally murdered by a mob of young men.

The Ahmadiyah, as well as other religious minorities in the country, are increasingly being targeted by potentially violent groups. In recent months, there have been an increasing number of attacks on Christian churches by militant Islamists. Critics of Islamist hardliners, such as Ulil Abshar Abdallah, the founder of the Liberal Islam Network, have received letter bombs.

Human rights activists at the international level have since expressed their concern. At the beginning of April, Saman Zia-Zarifi, the director of Amnesty International for the Asia-Pacific region in Jakarta, called upon President Susilo Bambang Yudhoyono to "exercise his responsibility in ensuring the human rights of all citizens, regardless of their faith, according to the guarantees of the Indonesian constitution and the International Convention for Civil and Political Rights, which was ratified by Indonesia in 2005."

The governing party in Indonesia only holds 26 percent of the seats in the country's parliament and, therefore, Yudhoyono must engage in a balancing act to hold his coalition together, which also includes representatives of the conservative Islamic camp. 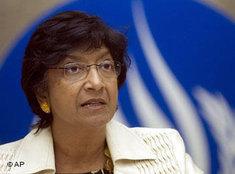 ​​In late April, Navanethem Pillay, the UN High Commissioner for Human Rights, wrote a letter to the Indonesian government in which she indicated her alarm about the growing violence against religious minorities and announced a visit by the UN Special Representative for Human rights later on this year.

The arrest of culprits in the letter bomb case and the foiled church bombing has sparked an intense debate on the causes of the increasing popularity of radical Islamic ideologies. The police have connected the accused with the Negara Islam Indonesia (NII) movement, which aims to establish an Islamic state in Indonesia and promotes Islamic extremism, especially in universities and secondary schools.

"Radicalism appears to be a safe refuge for those discontent with the rapid development of the world and who feel shunted aside in the brutal struggle of global competition," says the Islamic scholar Al Makin.

The Jesuit priest and philosophy professor Franz Magnis-Suseno sees another reason for the fascination with radical teachings. Clearly, the Indonesian dream of democracy has currently turned cold. "This isn't so much because of the failure to realize all economic dreams – things aren't so bad for Indonesians, but rather because of the all-pervasive corruption, especially among members of the political class," says Magnis-Suseno. "This accounts for the growing attractiveness of a return to a strict form of Islam."

According to Al Makin, the fact that violent Islamists have gained in influence is also due to the failure of Indonesia's large Muslim mass organizations. "Nahdlatul Ulama and Muhammadiyah, the two largest such organizations, should serve as the pillars of moderate Islam in Indonesia, but they have failed to delegitimize the claims of Islamic radicalism. Even worse, radical ideas have since found their way into both these organizations."

Education and the due process of law

The political scientist A.E. Priyono is convinced that the moderate majority must display a greater sense of unity and democratic awareness. "This is our homework," he says. "We have to mould our country so that it truly and finally overcomes its authoritarian heritage." 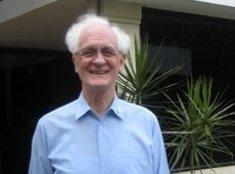 ​​Many observers also see the need for an education initiative and improvement in the due process of law. A recently published poll conducted for the Institute of Islam and Peace Research indicates that 48.9 percent of surveyed students in Islamic studies programs actually approve of violence in the name of their religion.

"Something must not be right with our courses on Islam and with the teachers," criticised human rights activist Andreas Harsono. He sees the root of the problem in the Indonesian Ministry of Religion, which is responsible for obligatory religious instruction in country's schools. "Why does a secular state like Indonesia need a Ministry of Religion at all?" asks Harsono.

Franz Magnis-Suseno, who has lived and taught in Indonesia for 50 years, attests to the need for reform of the educational system. "Education in the schools is aimed solely at acquiring knowledge and learning information by rote. Critical thinking, creativity, and the development of humanistic, inclusive ethical perspectives receives no support whatsoever," says Magnis-Suseno.

The film "?" attempts to present a humanistic perspective. In one scene, things almost come to blows between Churchgoers and a Muslim, who on account of his talent for acting is set to assume the role of Jesus in the passion play. Both the Catholics in the church as well as incensed Muslims object that this would soil their religion. The priest resolves the conflict with some wise words. "No religion can soil another. Only stupidity can do this."

We are in favour of human rights. But One Love armbands are self-righteous and ignore some fundamental issues. Stefan Buchen examines the debate surrounding the World Cup in Qatar END_OF_DOCUMENT_TOKEN_TO_BE_REPLACED

With its traditions of neutrality and non-alignment, Indonesia has had to tiptoe around the Ukraine war debate. Pro-Russia sentiment in the region complicates Jakarta's foreign ... END_OF_DOCUMENT_TOKEN_TO_BE_REPLACED

Calls for an environmentally-conscious form of Islam are growing in Indonesia, as climate change poses enormous ecological challenges for the country. Experts say it could change ... END_OF_DOCUMENT_TOKEN_TO_BE_REPLACED

Indonesia has become a primary battleground between democratic and autocratic visions of Islam in the 21st century, with Nahdlatul Ulama pitted against Abdullah bin Bayyah, a ... END_OF_DOCUMENT_TOKEN_TO_BE_REPLACED

END_OF_DOCUMENT_TOKEN_TO_BE_REPLACED
Social media
and networks
Subscribe to our
newsletter