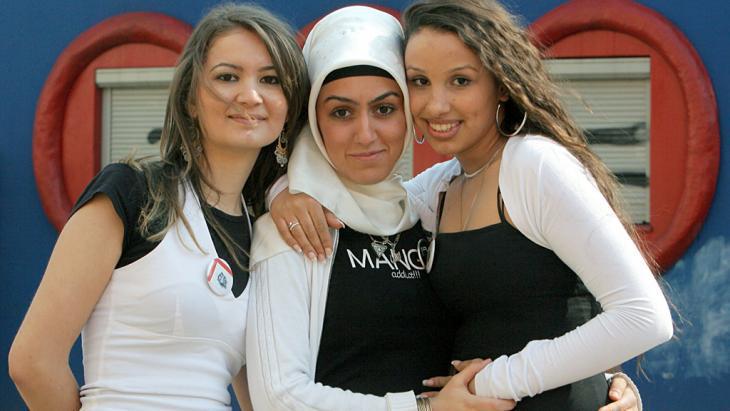 Symbolic acts alone are not enough

What is the appropriate way to inform young Muslims in schools about the dangers of Salafism? In co-operation with the Hamburg University of Applied Sciences, the association ufuq.de provides teaching materials on Islam, Islamophobia, Islamism and democracy. Gotz Nordbruch provides a personal account of preventive work in this field

"No, I'm not Charlie! I am the stolen, occupied Palestine, I am the destroyed Gaza. I'm the divided Kurdistan, I'm the tortured and forgotten Guantanamo." This was how the Frankfurt-based rapper SadiQ commented on the current debate surrounding the Paris attacks on Facebook. The 6,600 likes his words received highlight how this perception resonates with some young Germans.

Reactions such as these are an expression of a feeling that is widespread among young Muslims, namely that their experiences and interests are barely being heard in public life. For example, young people of Arab origin regularly complain that subjects such as the various conflicts in the Middle East and the role Europe or the US play in these wars is barely touched upon in the classroom.

Perceptions such as these are being deliberately addressed in the propaganda of Salafist initiatives. The aim of this propaganda is not primarily to justify the attacks themselves. Instead, the objective appears to be to exploit this sense of alienation and powerlessness, which has actually been further intensified by the huge attention paid to the victims of the Paris attackers. Various websites on the Salafist spectrum claim that in contrast to the Paris attacks, arson attacks on mosques, racist graffiti on the walls of community centres and the Pegida marches are barely covered by the media, which is why they give them such broad coverage.

Necessary to address experiences of discrimination 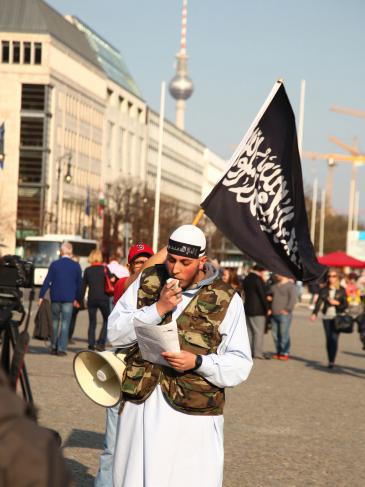 According to Gotz Nordbruch, most Muslims in Germany do not feel under threat of a holocaust, as suggested by some Salafists. "Nevertheless, these depictions apparently provide a way of dealing with one's own experiences of foreignness"

Talking about experiences of discrimination and outrage at the alleged or actual imbalances and double standards displayed by the public plays an important role in preventive work. The main focus of this work is neither on a discussion of the specific backgrounds to these experiences nor on an evaluation of whether these perceptions are accurate or not.

The willingness of teachers and social workers to even concern themselves with these perceptions at all is viewed by many youngsters as an acknowledgement that there is also a place for their opinions and concerns. The second step is to discuss content. It is at this stage that repeated comparisons with the Jews in the 1930s can be explored.

After all, this is also an important argument used by the Salafists. For example, videos produced by a group that supports the Salafist preacher Pierre Vogel claim that Muslims in Germany are facing a Holocaust. The annihilation of the Jews is not denied in this video; instead, it serves as a backdrop to promote the ideology that Muslims are victims. "Stopp Hetze gegen Muslime" (Stop the anti-Muslim agitation) is the title of a video on YouTube filmed at the memorial in the Nazi concentration camp at Dachau.

This has nothing to do with the reality of Muslims in Germany and the fact that most Muslims here happily view themselves as fully-fledged German citizens. Nevertheless, these depictions seem to offer a way of dealing with one's own experiences of feeling foreign.

Casting themselves as the eternal victims

A popular argument used by Salafist commentators is that this sense of foreignness is nothing new. Back in the seventh century, they say, the Prophet himself experienced exclusion and hostility because of his faith and, together with his followers, emerged  triumphant from the battle with the infidels. It is not surprising, therefore,  that the title of a recently announced biography of the German convert to Islam Sven Lau, alias Abu Adam, is "Fremd im Vaterland" (Foreign in the Fatherland). Lau is revered as a martyr in Salafist circles after he was investigated on charges of committing a "serious act of violent subversion", charges that were eventually dropped.

This worldview it is not about encouraging young people to fight for their rights and interests within society. It is much more a case of invoking a timeless battle with non-Muslims that the Muslims can only win together.

This makes symbolic acts all the more important, acts such as the participation of Chancellor Merkel and President Gauck in the memorial event "Zusammenstehen – Gesicht zeigen!" (Stand together: Show your face!), organised by the Central Council of Muslims at the Brandenburg Gate on 13 January in response to the Paris attacks. "Koran recitation at the Brandenburg Gate. Historic. Goosebumps" is how one observer summed up his impressions on Twitter. For many Muslims, this was a long-overdue sign that the Federal Government  supports them and is protecting them from hostility.

But for young people confronted with discrimination and reservations, symbolic acts alone do not go far enough to strengthen their sense of belonging.

As well as drawing their attention to concrete programmes and services that can help them deal with discrimination and hostility at school, work or play, educational work also focuses on highlighting the normality of German Muslim life.

Conversations with young people show how important it is for many young Muslims to address the many religious questions thrown up by daily life, questions to which they are unable to find satisfactory answers, either in their personal lives or at school. "As a Muslim, am I allowed to take part in the school Christmas celebrations?"; "What do I do about the teaching of the theory of evolution in biology class?"; or "Do I have to take part in swimming lessons?" Young people are searching for answers to these and similar questions and quickly find themselves turning to "Sheikh Google".

These questions feature largely in discussions on Facebook and other social networks. It is striking to note how in recent years, Internet sites run by people on the Salafist spectrum have become viewed as having the prerogative to answer such faith-related questions. Thus far, the online presence of the larger Islamic associations has been restricted to a small number of websites that barely target young people at all. The range of views voiced in the relevant social network chatrooms and online forums is correspondingly limited. With up to 100,000 Facebook fans, it is sites such as "Die Wahre Religion" (The True Religion) and "PierreVogel.de" that are influencing the debates unfolding on the Internet. 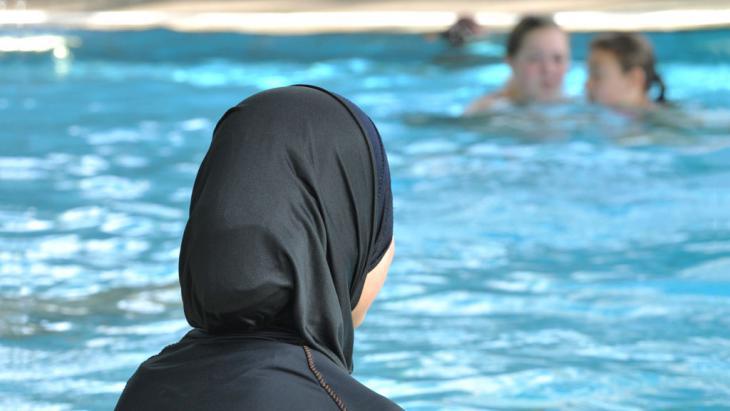 According to Nordbruch, many young Muslims are searching for answers to the many religious questions thrown up by daily life. Such questions include: Am I allowed to take part in the school Christmas celebrations? What do I do about the teaching of the theory of evolution in biology class? Do I have to take part in swimming lessons? In their search for answers, they often end up on the websites of radical Salafists, as other more moderate views are harder to find

Beyond theology and faith

Alternative approaches to these questions are provided not only in Islamic religion classes, where faith-based answers can be formulated. Approaches that are based on real life are equally important as they pick up on a desire for guidance and support and reveal perspectives that go beyond theology and faith.

In groups with young people from a variety of geographical and faith backgrounds in particular, religious questions are a good way of discussing general ethical issues affecting co-existence in a diverse society. Take, for example, the subject of co-determination and participation. "As a Muslim, am I allowed to vote?" is a question some young people ask in the run-up to both local and general elections. Salafist commentators respond with an unequivocal "No!".

Other views, such as those held by renowned Islamic scholars such as Bulent Ucar, are barely heard. For Ucar, participation in the political decision-making process is not only natural, it is essential if Muslim interests are to be represented. After all, the chance to play an active role in shaping society also provides the opportunity to contribute one's own interests and points of view.

In this process, educational work with young Muslims cannot be about depicting respective standpoints as "right" or "Islamically correct". What is important is to make these viewpoints visible to young people in the first place as part of a broad spectrum of Islamic opinion.

Allowing young people to encounter diversity within Islam is also a form of empowerment that heightens young people's awareness of Salafist worldviews and shows them ways of discussing their questions and representing their own interests to Muslims and non-Muslims alike.

Home
Print
Newsletter
More on this topic
Interview with the Islam scholar Lamya Kaddor: Jihad as a form of youth protestYoung Muslims in Germany: Forget, but don't forgetStudy on attitudes in "Post-migrant Germany": Do you love Germany?German jihadists: Turning their backs on the West
Related Topics
Education, Integration in Germany, Islam and democracy, Islam in Germany, Islamic religious instruction in German, Radicalisation, Salafis | Salafism, Wahhabism
All Topics

After at first agreeing to accept the grand prize as "Cultural Personality of the Year" in the Sheikh Zayed Book Award, Juergen Habermas then decided to decline the honour. A ... END_OF_DOCUMENT_TOKEN_TO_BE_REPLACED

Philosopher Juergen Habermas was due to be awarded a major Arab prize in Abu Dhabi, but has turned it down following criticism. This decision torpedoes Arab efforts at a ... END_OF_DOCUMENT_TOKEN_TO_BE_REPLACED

At nearly 92, Juergen Habermas is still advocating for a robust and transparent civil society. Now Germany's greatest living intellectual has rejected a book award from the United ... END_OF_DOCUMENT_TOKEN_TO_BE_REPLACED

Violent and racist crimes are on the up in Germany, according to official statistics on politically motivated crimes. Crimes by right-wing extremists hit their highest levels ... END_OF_DOCUMENT_TOKEN_TO_BE_REPLACED

In his book "Ground Zero: 9/11 und die Geburt der Gegenwart" (Ground Zero: 9/11 and the Birth of the Present) Islamic scholar Stefan Weidner analyses the consequences of the ... END_OF_DOCUMENT_TOKEN_TO_BE_REPLACED

Among Muslims, the image of women as "cossetted hijab-wearing princesses" is frequently invoked. But Muslim women have long wanted to be more. In her essay, Karoline Roscher- ... END_OF_DOCUMENT_TOKEN_TO_BE_REPLACED
Author:
Götz Nordbruch
Date:
Mail:
Send via mail

END_OF_DOCUMENT_TOKEN_TO_BE_REPLACED
Social media
and networks
Subscribe to our
newsletter