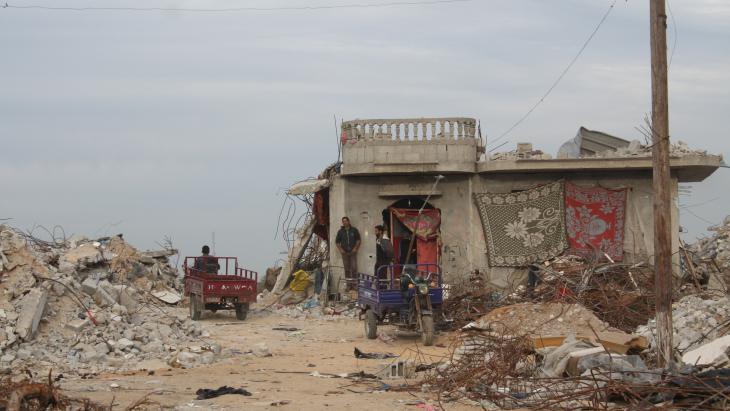 Left out in the cold

Every day, hundreds of people go to the Shamali warehouse in Shejaia, Gaza, where they hope to get the cement they need to re-build their homes after the devastating Gaza offensive of summer 2014. Almost five months on, reconstruction has virtually not begun. Many families across Gaza are living among the rubble of their semi-destroyed homes, unable to fix them because of the lack of cement caused by the blockade. By Ylenia Gostoli in Gaza

Rahaf Abu Assi was living with her family in their home in Rafah, in the southern Gaza Strip, when storm Huda hit the coastal enclave last week. Their home had been partially destroyed during last summer's Gaza offensive. Palestinian media reports that Rahaf died due to lung problems caused by the cold weather. She was only two months old. Two other infants and a 22-year-old fisherman also died due to the adverse weather conditions in Gaza last week. At least 49 mobile temporary shelters were inundated, and many people were evacuated from their homes due to flooding.

Of Gaza's 1.8 million-strong population, as many as 600,000 suffered damage to their homes as a result of last summer's offensive. At the end of 2014, the UN Office for the Coordination of Humanitarian Affairs (OCHA) reported that 100,000 people were still homeless. More than four months since the ceasefire agreement, reconstruction is still sluggish, and only a tiny fraction of the $4.5 bn in aid pledged by donors at a conference in Cairo last October has been delivered.

In Khuza'a, southern Gaza, the ground floor of Um Fadi Al-Najjar's house is the only structure left standing in an otherwise obliterated street. The family, including three children, now live in the cluttered space they managed to clear of the rubble, with the little furniture they were able to rescue. Rugs provide some shield against cold and wind where doors and windows once stood.

Inside the house, Um Fadi squats in front of a live fire, making bread on a traditional doomed metal griddle. "All we need is our house back. How can we live without a home? How can we do anything without a home?" she says. Most residents of this street have moved to mobile homes in a nearby encampment, encircled by a makeshift barrier of piled up sandbags to keep floodwater out.

Last summer's conflict, the deadliest to affect Gaza since 1967 – at least 2,145 people were killed, including 581 children – affected more than 113,500 houses and apartment blocks, destroying or rendering completely uninhabitable at least 22,000. 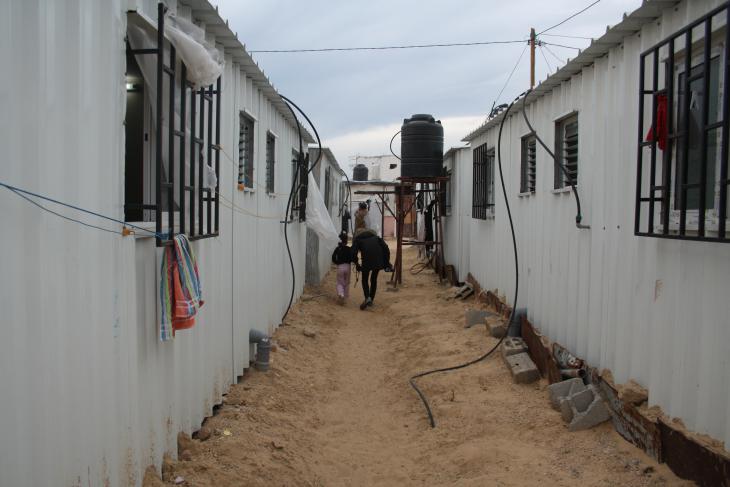 According to the UN Office for the Coordination of Humanitarian Affairs (OCHA), 600,000 people suffered damage to their homes as a result of last summer's offensive, known as Operation Protective Edge. Some 100,000 were still homeless at the end of 2014. Many people in Gaza have moved into temporary shelters such as the ones shown in this photo

Last October, the UN brokered an agreement between the Palestinian and the Israeli governments, known as the "Gaza reconstruction mechanism". Its aim was to facilitate reconstruction efforts on the ground while addressing Israeli security concerns related to so-called "dual-use" material – such as cement, aggregate and steel bars – that Israel fears could be diverted towards the re-construction of cross-border tunnels or the manufacturing of rockets.

Since Hamas came to power in 2007, Israel has placed severe restrictions on the import of such materials as part of its blockade on the strip, limiting and controlling the movement of people and goods in and out of the coastal enclave.

Nicholas Hercules, head of the UNDP's Gaza office, which shared responsibility for damage assessment with the refugee agency UNRWA, admits "it has been a very slow process." While rent subsidies are given to families whose homes were destroyed or rendered uninhabitable, those that were assessed as needing repairs receive UN coupons to purchase materials through the mechanism.

The agreement stipulates that the Palestinian government will purchase construction materials from pre-approved vendors. These will be stored and distributed in secured warehouses. The Ministry of Public Works and Housing releases the names of people entitled to purchase cement with UN coupons in batches, subject to screening and approval by all parties. Materials are monitored and tracked through a database accessible to Israeli authorities.

It is estimated that after the war, Gaza needs about 6 tonnes of cement a day to reconstruct. However, as of the end of December only 18,177 tonnes had entered Gaza, and less material is currently entering Gaza than in the three months immediately before the conflict. Palestinian Minister of Public Works and Housing Moffed Al-Hassina told Qantara.de that "it will take at least 20 years to rebuild at this pace."

This has led to much criticism of the mechanism. Oxfam said it shouldn't be allowed to become a substitute for an end to the blockade. "Unless donors step up pressure to end the blockade, many children made homeless by the recent conflict will be grandparents by the time their homes and schools are rebuilt." said Catherine Essoyan, Oxfam Regional Director. 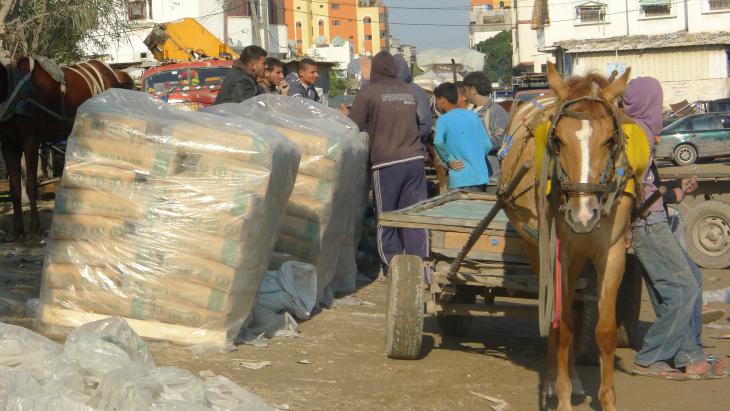 According to the reconstruction mechanism brokered by the UN, the Israeli government vets every family to which cement is assigned, and names are published only after careful screening. Nevertheless, cement is sometimes bought and re-sold to others on the black market. Pictured here: cement traders outside the Shamali warehouse in Shejaia, Gaza

The war destroyed lives and homes

In Shejaia, 17-year-old Ahmad and his brothers are salvaging tiles from the upper floor of their family's ravaged home, as well as anything else that can be recycled. A few metres away, Mohamed al-Areir and his workers have gathered for tea outside the house he is repairing. It is his brother's house; his own was razed to the ground. Mohamed's brother was killed on 20 July, when this densely populated neighbourhood witnessed some of the fiercest fighting of the entire war.

"I applied for materials but my turn hasn't come yet," he said, speaking to Qantara.de in December. "Winter will get colder, so I'm buying materials out of my own pocket. You can find the cement, but it's very expensive."

According to its manager Maher Khalil, every day, hundreds of people go to the Shamali warehouse, where they hope to be able to get the cement they need to re-build their homes. "They come to check if their name is on the list and if there is any cement available," he says.

CCTV cameras monitor every UN-brokered transaction inside the warehouse, but a few metres away from its entrance, some of the cement is bought and re-sold by "traders" on the black market, where prices can be as high as 170 ILS (about €36) per 50kg bag – inside, the price for a bag is 27 ILS (about €6).

"Some people who didn't wait for the UN and bought cement out of their own pockets are now taking their money back. Others have no money to buy cement and rebuild houses, so they sell it to pay workers, debts and other things they need," says Khalil. The British broadsheet "The Guardian" has also reported on allegations of officials taking bribes to issue coupons.

Hussain, a scruffy, brisk 19-year-old, comes to the warehouse early each morning to get the best deals. "Some people come, their name is not on the list. So they buy cement from us," he says. He claims he doesn't make more than 100 ILS (about €21) per tonne of cement he re-sells. "There is no work, so we come here to trade. The war destroyed our lives, not just our houses."

Home
Print
Newsletter
More on this topic
Rebuilding Gaza: The back of the Gazan economy has been brokenInterview with Raji Sourani in Gaza: "We are just soft targets: we are very cheap"Interview with Norwegian doctor Mads Gilbert: "Nobody is safe in Gaza"Germany's shared responsibility for the Gaza conflict and its end: Déjà vu in Gaza
Related Topics
Gaza War, Human rights, Humanitarian aid, Israeli-Palestinian conflict, Middle East peace process
All Topics

As someone accustomed to presenting his country to interested outsiders, Israeli teacher and tour guide Noam Yatsiv makes the case for a more nuanced appreciation of the ... END_OF_DOCUMENT_TOKEN_TO_BE_REPLACED

Jewish voices are much more diverse than the public often sees. Jewish men and women who oppose the injustice of Israeli occupation in the West Bank deserve our respect and ... END_OF_DOCUMENT_TOKEN_TO_BE_REPLACED

The Germans have a fragmented perception of the conflict between Israel and the Palestinians, and their discourse is dominated by certain catchphrases. All the while, there is a ... END_OF_DOCUMENT_TOKEN_TO_BE_REPLACED

An unusual organisation brings Jews and Muslims together to fight hate and promote dialogue. In the small central German city of Marburg they have been jointly calling for an end ... END_OF_DOCUMENT_TOKEN_TO_BE_REPLACED

Professor Timothy Brennan's "Places of Mind: A Life of Edward Said" is a detailed biography of one of the most important intellectuals of the twentieth century, taking us on a ... END_OF_DOCUMENT_TOKEN_TO_BE_REPLACED

Yair Lapid, like his late father, is a journalist-turned-politician renowned for his staunchly secular positions. But as the centrist politician edges towards the Israeli ... END_OF_DOCUMENT_TOKEN_TO_BE_REPLACED
Author:
Ylenia Gostoli
Date:
Mail:
Send via mail

END_OF_DOCUMENT_TOKEN_TO_BE_REPLACED
Social media
and networks
Subscribe to our
newsletter