The international community plans to donate over five billion euro for rebuilding the Gaza Strip. But there are huge hurdles in the way of the repair work. Bettina Marx reports

The borders have remained closed since the Gaza War. Not even construction material is available in Gaza to rebuild houses

​​It looks like an earthquake has struck in the North of the Gaza Strip. Israeli troops not only razed an entire residential area to the ground in Jebalya. They also destroyed the small industrial estate that had survived the blockade years. The troops finished what Israel had begun 41 years previously when it occupied Gaza: the dismantling of the Palestinian economy.

De-development is what the American economist Sara Roy calls this process, which she described in her now standard work on the Gaza economy, first published in 1995.

By defeating and occupying the Gaza Strip in 1967, Roy writes, Israel cut it off from the Egyptian hinterland and capped its economic relations to the Arab world. Instead, the narrow strip of land was placed in the service of the Israeli economy. The Palestinian institutions in Gaza were broken down, the chamber of commerce was closed and the population were reduced to labourers on Israeli construction sites.

No hope of economic recovery

Even the peace process was a disaster for the Palestinians in Gaza, as the region was completely isolated by Israel and the world during the Oslo peace process, writes Sara Roy, who teaches political economy in Harvard. A system of restrictions and roadblocks was set up that trapped the people inside this small, isolated area, the author adds. 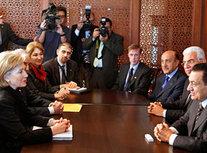 ​​It is no surprise that violence repeatedly flares up in Gaza, she says – the people there behave like the inmates of a huge prison from which there is no escape.

The Israeli withdrawal in summer 2005 did not bring with it the expected economic upturn. Quite the opposite, it reinforced this isolation even more, as the 1.5 million residents of the strip have since been cut off from the outside world entirely.

After the Hamas election victory in January 2006 Israel announced a strict economic blockade, supported by the USA and Europe, which destroyed every prospect of economic recovery in Gaza. And the borders have remained closed since the Gaza War. Not even building material for reconstruction is being allowed in.

100,000 homeless people are literally sitting and waiting in the rubble of their homes. They are waiting for help from outside and for the borders to open. But Israel has made that dependent on the fate of the captured Israeli soldier Gilad Shalit, whom Hamas in turn will only release in return for Palestinian prisoners held in Israeli prisons.

"Without a valve, the region will explode"

The Israeli military operation in the Gaza Strip is over, but humanitarian aid for the distressed civilian population has been slow to get underway

​​Yet the occupation policy is not the only problem for the Gaza Strip, Sara Roy stresses. In addition, Gaza has no natural resources and has even exhausted its ground water supplies. Its infrastructure has been severely damaged by repeated Israeli military operations, the sewage system is not far from collapse, the health system is completely overstrained and the education system overloaded.

The most urgent problem, however, is overpopulation and the extremely high birth rate. There are already more than 1.5 million people living in the 350 square kilometres of the Gaza Strip. Demographers expect this figure to double over the next ten years.

"If a valve is not created for these people to leave the area for work or education purposes, the region will explode. There is no alternative," Roy predicts. In the past few years, she says, not only the Gazan economy has seen reverse development, but also its society. The young population is traumatised, de-educated and de-qualified – not the best starting conditions for reconstructing the Gaza Strip.

Escalation of Violence in the Middle East
The Road Leads via Jerusalem
The latest escalation of violence in the Gaza Strip illustrates all over again: Hamas and Iran can only be weakened if the Palestinians finally have the prospect of a proper state. An analysis by Volker Perthes

Interview with Avi Primor
EU Essential for Guaranteeing Israeli Security in Gaza
In this interview, Avi Primor, Israel's former ambassador to Germany, talks to Diana Fong about the reasons for the Israeli offensive in the Gaza Strip and how the EU can help bring about peace between the Jews and Palestinians

END_OF_DOCUMENT_TOKEN_TO_BE_REPLACED
Social media
and networks
Subscribe to our
newsletter