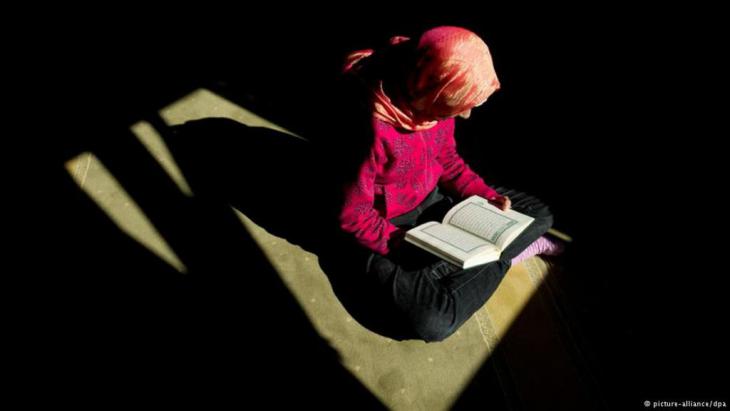 Reforming Islam
Show me the Sharia

There is violence in the name of Sharia, yet assertions by Muslims that this has nothing to do with genuine Islam seem fated to fall on deaf ears. A contribution to the debate by Cefli Ademi

Recently a law professor phoned me and asked: "Would you be so kind as to send me a copy of the Sharia, preferably as a PDF file?" "I doubt your computer would have enough memory," I replied. Her comment that she also had some external hard drives failed to convince me.

She had assumed that the Sharia is a codified book of laws. This is a common misconception, and one that, against the backdrop of the terrorism perpetrated by IS, for example, is leading to quite understandable fears, even among Muslims. Right-wing populist parties play on just these fears – with success, in view of their electoral gains of late. The AfD's anti-Islam programme is just one example: out of hand, they have declared Islam to be an ideology, all the while concealing the fact that their understanding of Islam is rejected by the overwhelming majority of Muslims.

But the anxiety aroused by these perceptions is not allayed by Muslims insisting that they have nothing to do with Islam. Of course, Islam itself is incapable of acting. It is not an agent. But we Muslims are. It is not enough to simply point out that most Muslims are peace-loving but silent. Blaming the world powers with their in fact highly questionable power politics does not help either. The Koran deems the rash assignment of blame to be a trait of the devil. It requires people to exercise their power of insight and self-criticism.

Dominated by erudition rather than dogma

In sum: yes, there is violence in the name of Sharia. And no, there is no such thing as "the" Sharia but rather several different readings of Sharia law that naturally draw on the specific circumstances of any one situation. And we Muslims must strive in both theory and practice to overcome narratives that despise creation and are divorced from reality. Like Navid Kermani, I believe that such narratives are not fed by the Islamic tradition. Indeed they seem to break with it instead.

For example, the traditional Islamic understanding of criminal law is not characterised by those draconian punishments that the IS or nations such as Saudi Arabia are currently notorious for. At the time the Koran was written, corporal punishment was the rule in many cultures. By contrast, Islamic criminal law doctrines stood out, instituting precise conditions and virtually irrefutable hurdles in criminal law proceedings.

They adhered, for instance, to the Islamic legal principle that "certainty (innocence) is not negated by doubt (suspicion)" – the equivalent of today's presumption of innocence in criminal proceedings. The Prophet warned: "better to err on the side of leniency than on the side of punishment". As a matter of fact, the overwhelming part of the traditional Sharia was not about law – and certainly not about criminal law. It focused instead on morality and ethics. "I was sent to perfect your morals," said the Prophet. Thus making the modern reinterpretations appear all the more tragic.

The real problem with the Sharia debate: "in traditional Islamic scholarship, the rule was that, in the rivalry for theological plausibility, only those who were both credible and intellectually equipped to argue their case would prevail," writes Ademi. Yet, the question is, how many are?

The traditional reading is characterised by proven scholarship and a striving for methodological and practical plausibility. In this form – and not through institutional dogma – the majority opinion has prevailed that only God has absolute knowledge of Sharia. This implies though that we must aspire to divine standards with respect to how we humans deal with creation.

This human quest, however, makes do with probabilities on the basis of divine instructions – not divine laws!  – in the Koran and in the prophetic tradition that has been verified as authentic. The result is many different Islamic schools of thought and law, which compete and coexist with each other in mutual recognition and respect.

Extremist groups in early Islam, such as the Khawarij, who saw an absolute "divine right" in their understanding of Sharia and who can be seen as precursors of the IS, were unable to compete with classical scholarship. They lacked the ability to argue on the same high level. The absurdity of their reading was already pointed out by Ali, the Fourth Caliph and a cousin of Muhammad, whom the Prophet called the "Gateway to Wisdom". The Khawarij accused Ali of having broken God's law, because he left it to a human court of arbitration to decide who should be caliph instead of simply seizing leadership as the victor in battle, as divine law supposedly ordained.

Ali assembled the people, bringing with him a copy of the Koran. He touched the Koran and commanded it to speak to the people and to inform them about God's law. One of those assembled called out: "What are you doing? The Koran cannot speak!" And that is exactly what Ali wanted to draw their attention to. The Koran, as a printed book, said Ali, "is just ink and paper and it works through the people – but they have limited powers of judgement."

The real problem with the Sharia debate

God, however, is elevated above all human shortcomings. It is precisely for this reason that Muhammad prohibited calling a judgement by a major scholar a judgement by God – because it is still but a human opinion. He thus paved the way for rivalry regarding plausibility while recognising diversity of opinion. Sharia has therefore been subject to more than a thousand years of human theorising, practice and transformation. A bookseller in Egypt or Jordan, for instance, would be astounded if you were to walk into his shop and try to order a copy of "the Sharia". If he was a good salesman, he would interpret this request as an offer to buy out his entire stock of Islam theological literature – and future books as well. Because all of these works represent attempts to understand Sharia. "I would like to buy the Sharia" – that would be a customer for life!

The Sharia is not a law book. It cannot be sent as a PDF file and it certainly can't be "introduced" as a set of national laws. That Sharia has become such a menacing spectre for so many today is due to the burgeoning of mindless interpretations over the past decades. That is the real problem with the Sharia debate. In traditional Islamic scholarship, the rule was that, in the rivalry for theological plausibility, only those who were both credible and intellectually equipped to argue their case would prevail. The Khawarij were neither of those things. It seems to me that our own ineptitude has helped a reading to prevail that has never before been plausible in the entire history of Islam.

What can we do about it? Raise the level of the argument and of our actions – together as a society. It is in all of our interests to break down prejudice against the Muslim minority.

Cefli Ademi, 35, is a lawyer and Islamic rights activist.

Since returning to power in Afghanistan, the Taliban have steadily eroded the rights and opportunities of women and girls, particularly their access to education. But Afghans are ... END_OF_DOCUMENT_TOKEN_TO_BE_REPLACED

The book "The Invention of the Maghreb: between Africa and the Middle East" prompts us to review basic terminology. This includes terms that we use almost every day as if they are ... END_OF_DOCUMENT_TOKEN_TO_BE_REPLACED

Tunisia has been going through a severe economic and political crisis in recent years. More than one in three young people there are unemployed. For many skilled, qualified and ... END_OF_DOCUMENT_TOKEN_TO_BE_REPLACED

At the end of every year, the team at Qantara.de gives you a run-down of the ten most-read articles on the site over the past 12 months. Here is a quick overview of the stories ... END_OF_DOCUMENT_TOKEN_TO_BE_REPLACED

The government in the Netherlands, one of the last European nations to abolish slavery, has made an historic apology. But some feel that there is still a long way to go. By Ella ... END_OF_DOCUMENT_TOKEN_TO_BE_REPLACED

To celebrate the bicentenary of the deciphering of the Rosetta Stone, the British Museum is running an exhibition entitled "Hieroglyphs: unlocking ancient Egypt" until February ... END_OF_DOCUMENT_TOKEN_TO_BE_REPLACED

Comments for this article: Show me the Sharia

I am not convinced. You present sharia as an infinitely flexible cloud of ideas. Somehow connected to god's plan, but in a way principally unknown to mankind. What a nice idea. And what a useless idea at the same time.

First, be prepared that your opinion is only one from that vague and continually changing cloud that you dream of. There are many fellow muslims in that cloud with very different ideas about what sharia is, and what it is not. It follows from your 'flexible' idea that these people *are* included. If you can be right, then it follows that they can be right too, sooner or later. And they are likely to claim their portion of their being, maybe, ab-so-lute-ly right.

Second, that presumed vage, flexible cloud full of volatile ideas that change into anything may sound free-minded, yet when it comes to the reality of every muslim's perspective, things start to take a much more concrete, distinct shape.

The fact that there are more islamic perspectives on sharia is neither the problem nor the solution. I believe you that sharia is somehow a 'flexible' system, determined by place, time, social group etcetera. The real problem is that the flexibility stops at the individual level. The individual muslim is not free to believe whatever he likes. He is not free to change his mind from one day to the other - even the concept is alien to him. He is not free to allow his children a radically different concept of sharia.

At the end, islam and sharia are dogmatic concepts at the individual level. And the islamic community consists of nothing but a huge number of individuals, all subjecting to 'their' absolute, dogmatic conception of sharia - whatever that is, given time, place, community, and scholars that happen to be influential.

Religions are dogmatic systems, even if they allow for flexibility over time and place. Your 'flexible cloud' is high up in the air, not so close to any beliver that he or she can reach for it and grab it. 'God' does not want people to touch his reign.

END_OF_DOCUMENT_TOKEN_TO_BE_REPLACED
Social media
and networks
Subscribe to our
newsletter