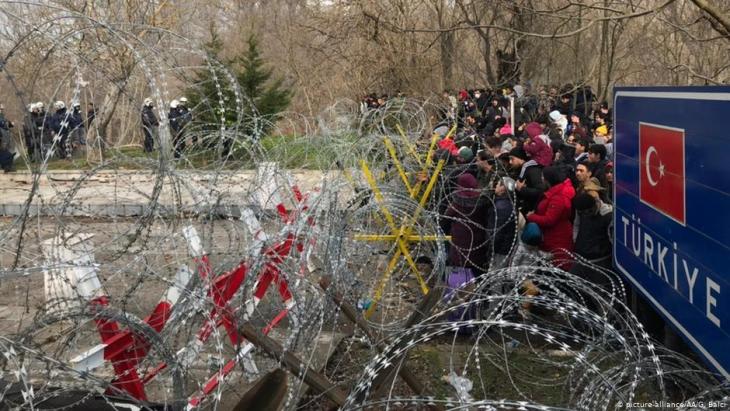 The parties at the centre of Germany's political landscape have often exhorted citizens to distance themselves from the right-wing AfD party. And yet, Europe's response to what is happening on its outer border in Greece shows that the ruling centre has itself assimilated some fundamental nationalist ideas. An essay by Stefan Buchen

Recognising Europe's political intentions is quite easy this time around. Unambiguous actions have made these aims more than clear. Greek police officers have formed a phalanx at the border crossing and are shooting tear gas at refugees whom Erdogan has let through from the Turkish side. Anyone who secretly makes it over the fence or across the Evros River is hunted, captured and brought back over the border to the Turkish side. Boat refugees who reach Greek islands are beaten up by European civilians. The EU border control agency Frontex is sending reinforcements to Greece.

And Europe is demonstrating its political will no less clearly in words. "We cannot take you in here," says Friedrich Merz from the CDU, a candidate who aspires to lead the "middle-of-the-road" camp in Germany and succeed Angela Merkel as Chancellor. As justification, Merz suffices himself with saying that a "loss of control" must not be allowed to happen again. This is an abbreviated variant of radicalism that ignores the question "Are we really allowed to act like this?"

Unlike Merz, the European Union politician Manfred Weber from the CSU has deigned to explain things in more detail. In an interview with Deutschlandfunk radio, he cites a legal justification for the complete sealing off of the outer borders. When asked if this is in fact permitted, the answer is yes.

The hysterical fear of a "collective assault"

Weber refers here to a decision handed down by the European Court of Human Rights (ECHR) in February. The court found it admissible to reject two asylum seekers, a Malian and an Ivorian, at the border between Morocco and the Spanish exclave of Melilla, without allowing them to state their case. 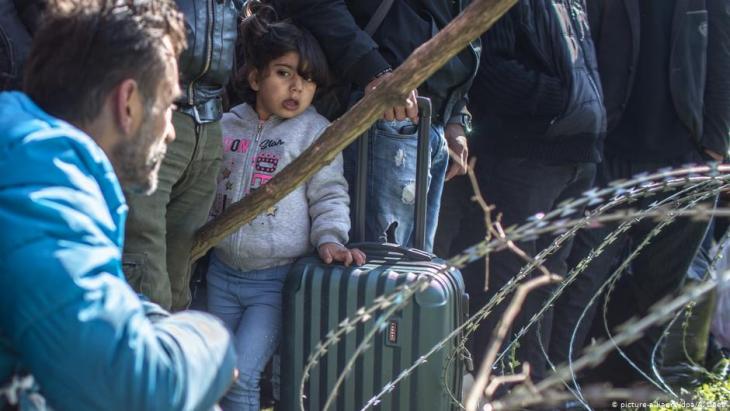 Name your price, Erdogan: the EU Commission's only plan to defuse the refugee drama and the conflict with Turkey is to offer more financial aid for the refugees. As the news agency AFP learned from EU circles on Thursday, the agency plans to provide a further half a billion euros for the 3.7 million Syrian refugees in Turkey. According to the report, the money is to come in addition to the six billion euros promised to Ankara in a refugee agreement concluded in 2016

Such instant dismissals are prohibited under international law. All EU member states signed the convention that sets down this ban. The ECHR justified the legality of denying the two Africans the chance to submit asylum applications by saying that they tried to climb over the border fence, thus disturbing public safety and order.

CSU politician Weber is now applying the same argument to the situation on the Turkish-Greek border. A "collective assault" on the European border is taking place there, he claims. Therefore, the police have the right to shoot tear-gas at those approaching the border. Manfred Weber compares the situation on the border with demonstrations in Germany that have escalated into violence. Here too, the police have the right to resort to force.

A collective assault? That makes it sound like an invading army. But that is not how the more than 10,000 refugees who have approached the Greek border are behaving. First, they were turned back. Then there were isolated violent clashes between refugees and police. But the vast majority of those seeking asylum have abstained from any violence. And what about the families with children who are toughing it out on the border? In the doctrine of constitutional law according to Manfred Weber, all of them must be assumed to be participating in a collective assault.

Despite what heads of state may claim, the Russian attack on Ukraine is not a wake-up call for a self-confident Europe that defends its values. The war is accelerating the decline ... END_OF_DOCUMENT_TOKEN_TO_BE_REPLACED

At the EU's outer borders, the right of migrants to a fair asylum procedure continues to be systematically disregarded. Take Greece, for example: in the worst case scenario, those ... END_OF_DOCUMENT_TOKEN_TO_BE_REPLACED

Madrid's about-face on the Western Sahara conflict has enraged Algeria. Trade relations have been frozen unilaterally and a cut in gas supplies to Europe could be in the pipeline ... END_OF_DOCUMENT_TOKEN_TO_BE_REPLACED

Mourad al-Marouai was just nine when a landmine killed him on a beach in war-torn Yemen, a tragedy that will haunt his family forever. After a swim, the little boy "suddenly ... END_OF_DOCUMENT_TOKEN_TO_BE_REPLACED

A ceasefire has been in effect in Libya for the past year and a half. Yet after Russia's attack on Ukraine, another proxy war looms in Africa's most oil-rich country. Mirco ... END_OF_DOCUMENT_TOKEN_TO_BE_REPLACED

The Ukraine war has seen energy prices spike with oil producers in the Middle East making more money than ever. But will it put the brakes on long-planned reforms to diversify oil ... END_OF_DOCUMENT_TOKEN_TO_BE_REPLACED
Author:
Stefan Buchen
Date:
Mail:
Send via mail

END_OF_DOCUMENT_TOKEN_TO_BE_REPLACED
Social media
and networks
Subscribe to our
newsletter