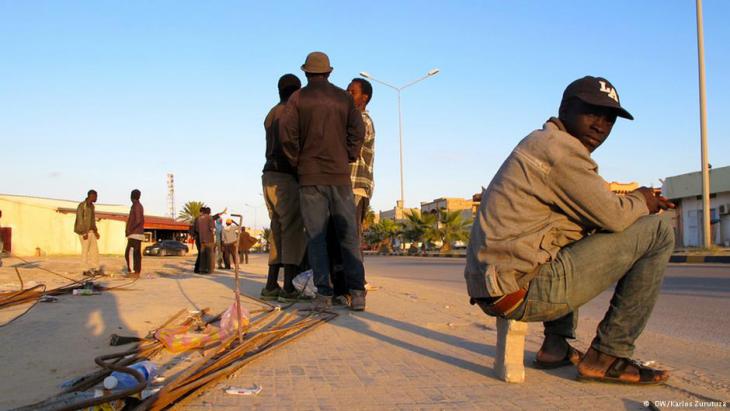 Migrants and refugees from Africa and beyond find shelter in a former major smuggling route to Italy. Zuwara, once a muster point for those seeking to jump on a raft to Europe, is now proving a haven for those fleeing conflict and instability in other countries. By Karlos Zurutuza

Neither Suleyman, nor Ahmed or Rasool are HIV positive. It's confirmed by the medical certificates hanging at the entrance of their small restaurant in downtown Zuwara. The Nabelsi brothers came from Djerba, Tunisia, after the political earthquake that shook the whole region in 2011. The collapse of tourism in their country forced them to fold their business back home, which they later re-opened on this side of the border two years ago. Djerba is just a two-hour drive. Besides, Zuwara doesn't look that foreign to them.

"Many Tunisians moved to Tripoli looking for a job after the revolution, but we decided stay here because everybody here is Amazigh, the same as us," Suleyman explained as he wrapped a new batch of sandwiches in brown paper.

Also called Berbers, the Amazigh are native inhabitants of North Africa, with a population extending from Morocco's Atlantic coast to the west bank of the Nile in Egypt.

Located a hundred kilometres west of Tripoli, Zuwara, a town of 50,000 habitants, is the only Amazigh enclave on the Libyan coast. Today the road that connects the city with Tripoli is blocked by a rival militia, the same as the one that leads to the Nafusa mountains – Libya's main Amazigh stronghold. 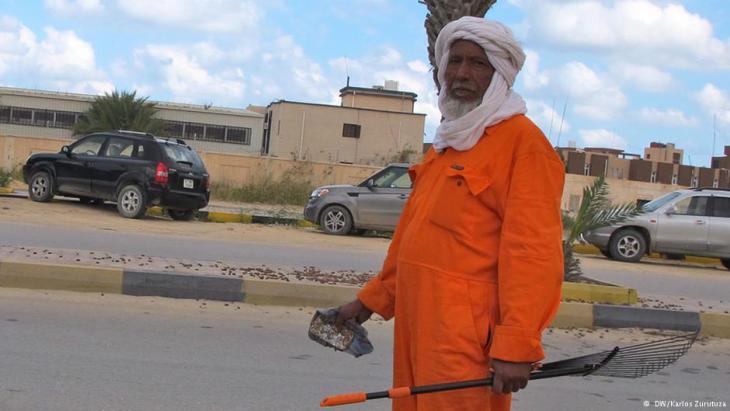 The Touareg face war and persecution in southern Libya. This tribesman, now employed as a street sweeper, is one of many who have arrived in Zuwara in search of stability and a peaceful existence

Four years after Gaddafi was toppled, there are two governments in Libya, one in Tripoli and the other in Tobruk, 1,000 kilometres (620 miles) east of the capital. Chaos across the country is rife, but the Nabelsis say they have not yet decided to move again.

"There's no spot safer than this one in Libya. And if things ever get ugly we can always head west and cross the border," added Suleyman.

There's certainly a sense of normality in this city where one in two businesses is a coffee shop. However, Zuwara would have been devoured by the rubble and debris, were it not for the work of the cleaning squad. Along with the orange jumpsuit, the distinctive Touareg turban seems to have become part of the uniform of the street sweepers in Zuwara. Over the last year, many Touareg have arrived from Libya's remote south, fleeing the war with the Tubus – a sub-Saharan people – after centuries of peaceful coexistence in the desert.

"I lost my house and almost everything I had to the war down there," Shabud said. "Someone told me that Zuwara was a very peaceful city, so I didn't think it twice," added the man who has been displaced in his own country.

From the offices of the Red Crescent, Ibrahim Atushi, head of the NGO's emergency committee, said there are around 3,000 foreign workers registered in the city. 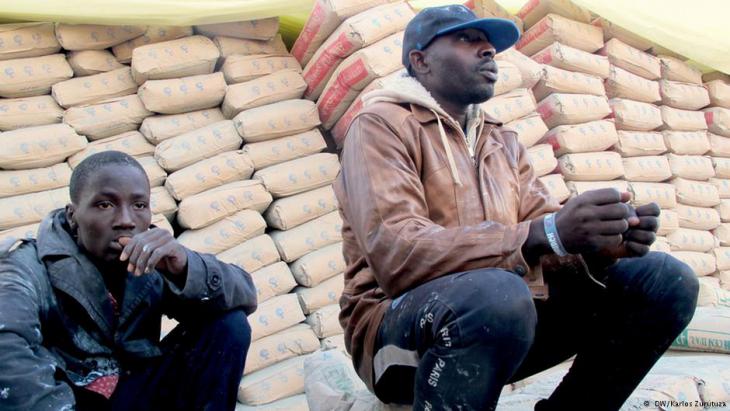 Few prospects: for many of those who end up in Zuwara, it can feel like a backwater. Ekeing out a living with occasional construction work is no-one's idea of a dream job. When the alternative is terrorism, slavery and death, however, peace is a precious commodity

"They are Tunisians, Nigerians, Malians, Gambians ... and they come not only from Africa but also from countries as far away as Pakistan or Bangladesh," explained the official. "We know their number because they get a medical test from us," he added.

Zuwara's Martyrs' Square is lined with a myriad of panels and murals remembering the fallen from the 2011 war. Two hundred metres to the west, the road is suddenly flanked by dozens of individuals jumping into pick-up trucks that stop momentarily for them. They are also Tunisians, Nigerians, Malians, Gambians; there are even half a dozen Bangladeshis.

None of them have a medical certificate and, therefore, no work permit. They wait from dawn until late into the night along the road to get occasional work in construction, and they sleep in the crumbling stash houses nearby.

Halil, a 26-year-old Nigerian who agreed to talk on condition of anonymity, said he lost his parents and one of his brothers in the war against Boko Haram. Eventually he fled Nigeria, but the nightmare was far from over:

"Once in Tripoli a militia arrested me and handed me a mobile phone to call my family. I had to tell my aunt they'd kill me if they didn't pay $500," recalled the Nigerian. After one month the money arrived, but he was released only to be captured for a second time. 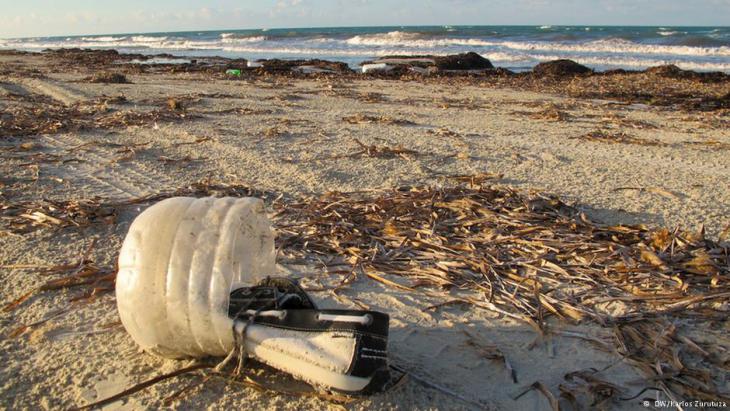 Since local citizens mobilised and a local brigade disbanded the smuggglers' network three months ago, the beach is deserted. Yet, for some, the urge to move on remains strong and Europe is, as ever, "the promised land"

"Those who cannot afford to pay are either killed on the spot or sold as slaves," pointed the refugee. Many of those interviewed said they had undergone similar experiences, but all of them claimed such abuses were unheard of in Zuwara.

"Here our life is still miserable, but we wouldn't dare to speak to you in the middle of the street elsewhere in Libya," Amin, a 21-year-old Gambian said.

Amin, however, won't be able to leave from here, since Zuwara citizens mobilised and a local brigade disbanded the local smugglers' network three months ago.

"Do you know where are they leaving from now?" asked Amin, wiping his face, still covered in dust. "Can you tell us where to go?"

Home
Print
Newsletter
More on this topic
Refugees in Libya: Scapegoats for the crimes of a fewLibya: A sanctuary for radicals and militantsCivil war in Libya: A stateless society
Related Topics
Boko Haram, Immigration, Islam in Africa, Libya after Gaddafi, Refugees
All Topics

With the first COVID-19 case having been detected in the Kutupalong Rohingya refugee camp in Bangladesh, aid agencies are warning that without additional resources, there will be ... END_OF_DOCUMENT_TOKEN_TO_BE_REPLACED

According to the latest Reuters tally, more than 2.54 million people are now reported to have been infected by the novel coronavirus globally and 177,004 have died. As Muslims ... END_OF_DOCUMENT_TOKEN_TO_BE_REPLACED

Around the Islamic world, lockdowns and curfews are being extended and religious ceremonies are being cancelled outright in the hope of slowing the spread of COVID-19. Here’s the ... END_OF_DOCUMENT_TOKEN_TO_BE_REPLACED

Myanmarʹs Aung San Suu Kyi and Hungaryʹs Viktor Orban have discussed their mutual fear of Muslims. In doing so, the Burmese leader has again showed she has lost the moral standing ... END_OF_DOCUMENT_TOKEN_TO_BE_REPLACED

Fatima was gang-raped during attacks on Rohingya Muslims as part of Myanmar's ethnic cleansing campaign. Now, she and her family live in a camp in Bangladesh with few prospects, ... END_OF_DOCUMENT_TOKEN_TO_BE_REPLACED

Some four million people in Assam state, nearly all of them Bengali Muslims who have lived in India for more than four decades, are at risk of disenfranchisement after being ... END_OF_DOCUMENT_TOKEN_TO_BE_REPLACED
Author:
Karlos Zurutuza
Date:
Mail:
Send via mail

END_OF_DOCUMENT_TOKEN_TO_BE_REPLACED
Social media
and networks
Subscribe to our
newsletter