Relations Between Armenia and Turkey
Uncertainty Until the End

The rapprochement of Armenia and Turkey is not easy. The signing of an accord to establish diplomatic relations almost fell through on Saturday. Nevertheless, this development marks Ankara's departure from its former pan-Turkish approach in the post-Soviet sphere. By Michael Ludwig 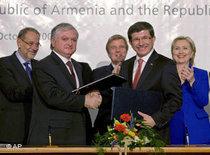 ​​ A year ago, while the South Caucasus was reeling from the war between Georgia and Russia, another development had already underway, which reached a provisional climax this weekend in Zurich – the rapprochement of Armenia and Turkey. On Saturday, after months of secret negotiations brokered by Switzerland, the foreign ministers of both countries signed two protocols that aim to pave the way toward building cordial relations between the two countries.

Because of the dispute over the massacre of approximately 1.5 million Armenians in the Ottoman Empire in 1915, diplomatic relations were never established in 1991 when Turkey recognised independent Armenia, even though it was one of the first countries to do so. Then, in 1993, Turkey closed their shared border in the heat of the Armenian-Azerbaijan war over the Armenian-populated Nagorno-Karabakh exclave in Azerbaijan.

Up until the last minute on Saturday it remained uncertain whether the heralded signing of the protocol, released in early September, would actually take place. American Secretary of State Hillary Clinton travelled to Zurich solely for this occasion. According to reports, Turkey wanted to address the still-unmentioned dispute over Nagorno-Karabakh and the Armenian occupation of seven Azerbaijani provinces in the vicinity of the exclave in a final statement.

Turkey has always supported Azerbaijan in this conflict. It bolstered Azerbaijan against Armenia with its blockade policy, while the trade barrier-encircled Armenia remained dependent on its protector state Russia. All important transportation and infrastructure projects in the South Caucasus have bypassed Armenia. 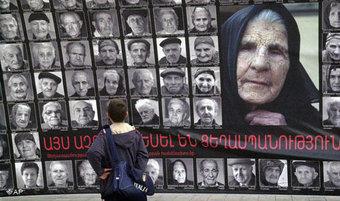 Because of the dispute over the massacre of approximately 1.5 million Armenians in the Ottoman Empire in 1915, diplomatic relations between Turkey and Armenia were never established

​​ As a result of a new orientation in Turkey's regional foreign policy in recent years, Ankara has turned away from its former pan-Turkish approach in pursuing its interests in the post-Soviet sphere. The overarching goal from now on is the initiation of problem-free relations with all its neighbours. The Turkish-Armenian rapprochement, however, has led to serious tensions between Ankara and Baku.

Turkey's initial condition that at least some progress be made toward the resolution of the Karabakh conflict before it would sign the accord was quickly dropped, much to the displeasure of the Azerbaijan government. Azerbaijan threatened to withdraw Azerbaijani investments in Turkey and to realign its oil and gas foreign policy to Ankara's disadvantage.

As the politics of rapprochement between Turkey and Armenia, which commenced when both presidents attended the World Cup qualifying match between Armenia and Turkey, became concrete in early spring, Turkish Prime Minister Tayyip Erdogan, during a visit to Baku, reassured the Azeris that Turkey would open the border only if Armenia relinquished its occupation of Azerbaijani territory. On Sunday he confirmed this condition again, but the Azerbaijan government remains dissatisfied with this assurance.

A moment of truth

After – at least according to the Azerbaijani account – the President of Azerbaijan, Ilham Aliyev, and the President of Armenia, Serzh Sarkisian, failed on Thursday and Friday to make any progress toward resolving the Karabakh conflict, the moment of truth arrived for the Turkish side on Saturday with regard to its relations with Azerbaijan. 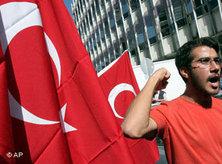 The Turkish opposition has promised a hard political battle. But the success of the politics of "no arch-enemies" would give Ankara the opportunity to slip into the role of an influential decision-making power in the South Caucasus

​​ After listening to suggestions from Russian foreign minister Sergei Lavrov and comments from Armenia, Turkish foreign minister Davutoglu wanted to address the Karabakh problem in a final statement. Armenia was opposed, which is why the signing might not have taken place if both sides, in a last-minute negotiation led by American Secretary of State Hillary Clinton, had not agreed to renounce making any statements following the signing of the accord. Observers consider Armenia to be the diplomatic winner.

The domestic opponents of Erdogan in Turkey and Sarkisian in Armenia, however, will certainly make sure the accord is not ratified any time soon. The first Armenian president after Armenian independence, Levon Ter-Petrosian, is evidence that the struggle for power can lead to remarkable political about-faces. In 1998, he was toppled because he espoused a policy of reconciliation with Azerbaijan with regard to Nagorno-Karabakh. Today he is among the more vehement critics of the accord, accusing Sarkisian of betraying national interests.

The ratification of the accord, however, and the subsequent opening of the border to Turkey would mean that Armenia could rejoin world trade. Yerevan would then no longer be economically and politically dependent on Russia alone, whose state-owned enterprises already control Armenia's entire energy sector and railroad. 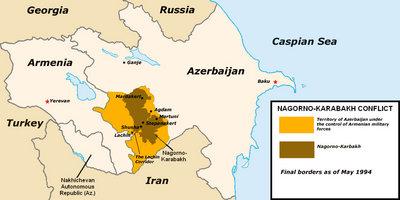 Bone of contention Nagorno-Karabakh: Turkish Prime Minister Tayyip Erdogan reassured the Azeris that Turkey would open the border only if Armenia relinquished its occupation of Azerbaijani territory

​​ The expected resistance in both parliaments against the ratification of the accord makes any opening of the border unlikely in the immediate future. The Turkish opposition has promised a hard political battle. But the success of the politics of "no arch-enemies", initiated a few years ago would give Ankara the opportunity to slip into the role of an influential decision-making power in the South Caucasus.

The proposal for a platform of stability and cooperation in the Caucasus, which Turkey presented after the war in Georgia, substantiates this intention. By approaching Armenia, Ankara has brought movement back to the long-gridlocked situation in the region.

Time to turn the progress made in the Azerbaijan-Armenian negotiations over Nagorno-Karabakh into a success: rapprochement is under way

​​ The international mediators of the OSCE Minsk Group, co-chaired by United States, Russia, and France, now have a window of opportunity in which they can bolster efforts toward resolving the Karabakh conflict. Two decades of geopolitical rivalry in the region has made it difficult to put joint pressure on Azerbaijan, which increasingly leans on the United States, and on Armenia, which has taken refuge under Russia's protective wing.

It is now high time to turn the progress made in the Azerbaijan-Armenian negotiations over Nagorno-Karabakh into a success, declares the latest Karabakh report from the International Crisis Group, which is well connected in the crisis regions and the important capital cities. The prospect of continued progress, despite the most recent Azerbaijani disclaimers, seems to be fairly certain.

END_OF_DOCUMENT_TOKEN_TO_BE_REPLACED
Social media
and networks
Subscribe to our
newsletter