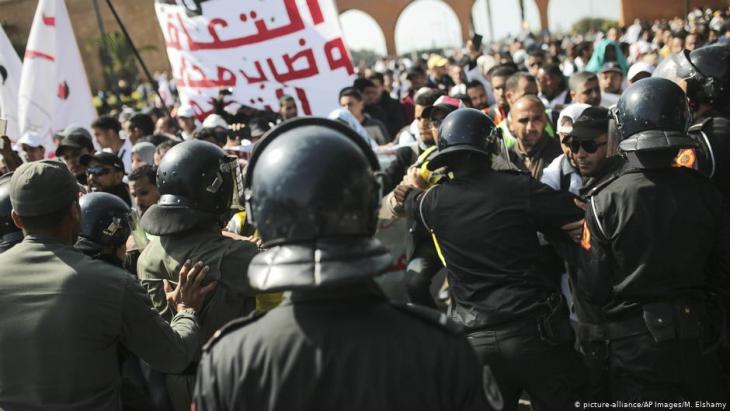 Relations between the EU and Morocco
The stability myth

The EU's relationship with the Moroccan government reinforces the political status quo at a time when a growing number of Moroccans appear to want change. By Chloe Teevan

On Thursday, 27 June 2019, the EU and Morocco held their first Association Council meeting in over four years, which was presented as a "reinvigoration of relations" between Rabat and Brussels. This reinvigoration comes after several years of diplomatic tension between the two due to two European Court of Justice (ECJ) rulings stating that trade deals on agriculture and fisheries were not applicable to the disputed Western Sahara.

Having temporarily resolved this issue to the Moroccan government's benefit – with the European parliament in early 2019 accepting amended agricultural and fisheries agreements that extend to the Western Sahara – the Association Council provided a forum to discuss joint priorities for the EU–Morocco relationship for the coming years. They laid out an ambitious joint declaration covering a wide range of issues including shared values, trade and development, security and foreign policy, migration and climate change.

However, as the EU moves to strengthen its relationship with the Moroccan government, an increasingly large part of the Moroccan population appears to reject that government and the wider political order in their country. Initial Arab Barometer data, also published on 27 June, shows that 49 per cent of Moroccan adults polled supported rapid political change, the highest amongst the various countries polled by the Arab Barometer. This rejection of the status quo is also reflected by a steady stream of protests and strikes despite growing repression by the Moroccan authorities.

Furthermore, 44 per cent of Moroccan adults polled by the Arab Barometer were considering emigration, while the figure rose to 70 per cent for adults under 30. Moroccans have been leaving the country in large numbers – both via regular and irregular avenues. This includes a longstanding and massive brain drain, with 600 engineers leaving the country each year, 38,000 Moroccans currently studying in France (of whom few return), and 7,000 Moroccan doctors working in France. At the other extreme, irregular migration has been rising; 13,076 Moroccan migrants entered Spain in 2018, making them the largest nationality at 20 per cent of the total, compared with 2016, when Moroccans were only the seventh-largest nationality. 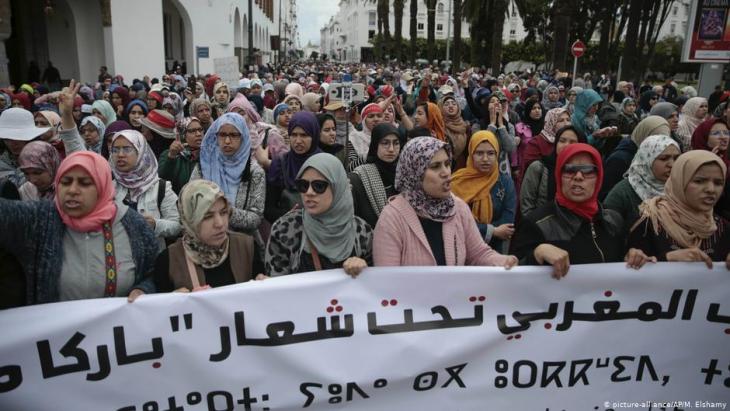 Arab Barometer data published in late June noted that 49% of Moroccan adults polled supported rapid political change. "This rejection of the status quo is also reflected by a steady stream of protests and strikes despite growing repression by the Moroccan authorities," writes Chloe Teevan. One protest movement is the Hirak movement, which began in the Rif in 2016 and "highlighted corruption and inefficiency in the delivery of promised development projects." Pictured here: Protesters sing "The people want the detainees released" and "Long live Rif" in Rabat

The protests and strikes point to development failures and inequalities in Moroccan society, but each of these movements was driven by deeper governance failures that are often linked to patronage networks through which political and economic influence is exercised. The Hirak movement, beginning in the Rif in October 2016, highlighted corruption and inefficiency in the delivery of promised development projects. The Boycott movement, beginning in spring 2018, drew attention not only to the cost of living, but also to the privileged political and economic positions enjoyed by a small group of business elites. Wider rural protests have pointed to the failure of the country's development plans to live up to expectations across a wide range of areas, resulting in rural populations losing trust in local political elites and the larger political system.

EU–Morocco relations tend towards de facto support for the political status quo as with the other Mediterranean countries that make up the EU's "Southern neighbourhood". Although policy documents continue to highlight the importance of democracy and human rights, in practice this amounts to a series of technocratic initiatives around the subject of governance and human rights, such as a technical committee of experts on human rights, a programme of support to justice reform and financial support to civil society. The EU has also actively pushed for economic liberalisation in Morocco through trade deals on industrial goods, agriculture and fisheries that have increasingly opened up the Moroccan market to European imports and investors, and allowed Morocco to become integrated into European value chains, notably in the automotive industry. Both the EU and key member states have also worked closely with the Moroccan government in counterterrorism efforts. 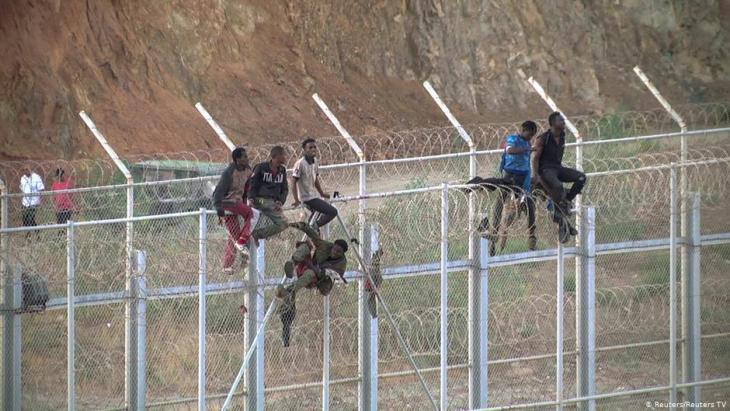 Morocco is the main gateway for migrants entering Europe. A total of 65,383 refugees and migrants landed in Spain from Morocco via irregular channels in 2018. Pictured here: African migrants climb the border fence separating Morocco and Spain's North African enclave of Ceuta

Migration has of course been a major area of co-operation as well. In 2018, Morocco became the focus of increased European attention due to rising migration flows both coming from and passing through Morocco, making it the main gateway for migrants entering Europe. The figures remained small, with a total of 65,383 refugees and migrants landing in Spain from Morocco via irregular channels in 2018. But the numbers had more than doubled from 28,349 in 2017, which raised alarm bells in European capitals, and particularly in Madrid, that the number might continue to rise. This reinforced the EU's desire to work closely with Morocco. Following advocacy from Spain on Morocco's behalf, the EU agreed to short-term support of 140 million euros to Morocco to reinforce border control and slow migration. Throughout early 2019, Spain has continued to advocate for a deeper and closer relationship with Morocco.

The new Joint Declaration includes positive developments from an economic and social perspective, including a growing appreciation of the linkages between trade, development and mobility, marking a major advance for the EU, which has tended to treat these topics as separate in the past. There also appears to be a growing understanding that supporting the long-term goal of achieving "shared prosperity" with its closest neighbours is not simply about development aid or trade liberalisation, but about a comprehensive approach to education and training, knowledge sharing and technology transfers, economic governance and the building of a social economy. The inclusion of the crosscutting theme of the environment and climate change is also positive, and the declaration includes repeated commitments to multilateralism, including through the UN and EU-AU co-operation. 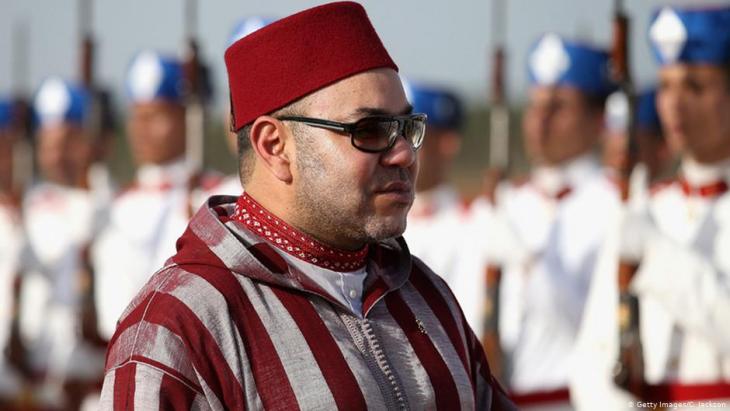 According to Chloe Teevan, King Mohammed VI (pictured here) was active and vocal in demanding economic and social reforms, even pushing specific policies such as the renewal of conscription and firing a number of ministers to show that the government must show accountability. "However," she writes, "it is very unclear that the series of reforms will truly address the fundamental disequilibrium and lack of transparency in the country's domestic economy, or the scale of the governance challenges facing the country"

However, the declaration also refers to Morocco's importance as a partner due to its "political stability" and the "reforms" it has undertaken, without further reference to Morocco's backsliding on human rights and basic freedoms. It is true that in response to the growing unrest in the country, King Mohammed VI increasingly took a central role in demanding economic and social reforms and even pushing specific policies such as the renewal of conscription. The king also fired a number of ministers to show that the government must show accountability. However, it is very unclear that the series of reforms will truly address the fundamental disequilibrium and lack of transparency in the country's domestic economy, or the scale of the governance challenges facing the country.

EU officials argue that ensuring a meaningful working relationship with Morocco is only possible if the EU resists lecturing on democracy, human rights and the rule of law. But in the Joint Declaration, the EU appears to have pushed other European priorities and conceded on a range of Moroccan priorities. The declaration thus includes very ambitious language on reopening discussions around a Deep and Comprehensive Trade Agreement (DCFTA), and of course on migration, which is designated a crosscutting theme. These are clear EU priorities on which Morocco has previously been less willing to co-operate, but in order to attain these goals, the EU appears to be willing to develop a much more comprehensive relationship than it was previously willing to concede, without clear conditions or advances around democracy, human rights and the rule of law.

Adopting closer co-operation with Morocco without consideration of the political context risks reinforcing the political status quo, thereby reinforcing stagnation rather than enhancing resilience – a key goal of the EU in its Southern neighbourhood. European co-operation will feed into ongoing economic reforms and development initiatives in Morocco aimed at tackling some of the challenges that were the immediate cause of protests and strikes across the country, but such measures will not tackle the deeper roots of the problem. The EU should continue to push for a closer relationship with Morocco, but if the EU wants to support stability in Morocco, then political reforms should be given the same weight as economic reforms amongst its priorities.

Chloe Teevan is an independent researcher and consultant working on North Africa and European policy towards the region.

Many Turks are dissatisfied with the international status of their country. At the same time, opinion polls reveal great scepticism among the Turkish population towards the USA. ... END_OF_DOCUMENT_TOKEN_TO_BE_REPLACED

Very different Western reactions to the suffering in Ukraine and the Arab world show that there is a profound rift among cultures. Essay by Michael Young END_OF_DOCUMENT_TOKEN_TO_BE_REPLACED

Since Spain abandoned its traditional neutrality towards the conflict in Western Sahara, Morocco has announced a "new phase" in relations between the two countries. But what is ... END_OF_DOCUMENT_TOKEN_TO_BE_REPLACED

Tunisia's president has been carrying out a coup by degrees, demolishing the country's hard-fought democratic gains bit by bit. With an economy in turmoil and a splintered ... END_OF_DOCUMENT_TOKEN_TO_BE_REPLACED

From the Euphrates to the Mekong, dams that ensure one country's water supply risk leaving others parched. But shared water resources can be a source of peace as well as conflict ... END_OF_DOCUMENT_TOKEN_TO_BE_REPLACED

Middle Eastern countries are still on the fence when it comes to the Russian invasion of Ukraine. Their citizens point to the West's double standards surrounding conflict and ... END_OF_DOCUMENT_TOKEN_TO_BE_REPLACED
Author:
Chloe Teevan
Date:
Mail:
Send via mail

END_OF_DOCUMENT_TOKEN_TO_BE_REPLACED
Social media
and networks
Subscribe to our
newsletter