Putting an End to Intolerance

Jurnal Nasional journalist Luther Kembaren examines a host of factors that have led to sectarian and religious violence in Indonesia, and calls for all elements of Indonesian society – including the government and media – to help empower religious minorities

The natural tolerance that has existed among Indonesia's religious communities is under threat, says Luther Kembaren. Pictured: a woman during church services in Medan, Indonesia

​​ The beginning of 2010 saw much violence directed towards Indonesia's religious minorities. On 3 January, a group called the People Communication Forum burnt down the Filadelfia Church, a house of worship for the Protestant Batak Christians in Bekasi, West Java. In a separate instance, extremist groups, such as the Islamic Defenders Front (FPI) and the Taliban Brigade, forcefully shut down an Ahmadiyyah mosque and community centre.

Most evident in the outskirts of Jakarta where the FPI compels officials – by threatening attacks or disturbing the peace – to implement a conservative interpretation of Islamic law, this type of aggression undermines the natural tolerance that has existed among Indonesia's religious communities until recent decades. 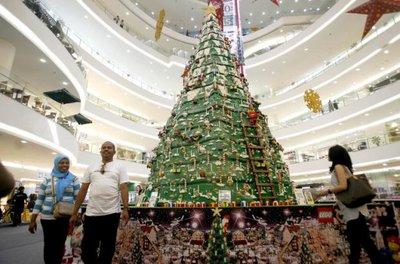 "Theological and socio-economic challenges": a Muslim couple pass by a Christmas tree in a Jakarta shopping mall

Second, the movement of people from villages to cities has contributed to greater unemployment in urban areas. Those from rural areas generally have less education and thus face greater difficulties finding employment. The resulting economic gap and jealousy directed towards the wealthy has shifted popular sentiment towards certain religious groups that provide the poor promises of economic fulfilment.

The implicit trade-off of course is that those who are helped are then encouraged to adopt their benefactor's agenda, which often marginalises other religions. Thus, efforts to build a strong sense of inter-religious community face not only theological but also socio-economic challenges.

Finally, some people take an exclusivist view on religion, claiming that their beliefs are superior to others'. Such attitudes can lead to inter-group violence, with certain followers attacking others because they are perceived as deviating from "true" Islam.

Though some local groups are already hard at work to address the tensions between faiths and prevent inter-religious violence, Indonesians must do more. 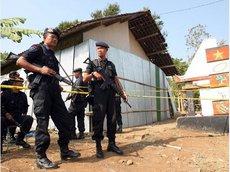 Authorities and the government in Indonesia have to accommodate the aspirations of Indonesia's multi-religious community, Luther Kembaren stipulates. Pictured: Security Police forces in Indonesia

​​ The Wahid Institute, an organisation espousing a moderate and tolerant view of Islam and working for the welfare of all Indonesians, in cooperation with the Center for Marginalized People (CMARs), are giving a voice to religious minority groups and engaging with them in national dialogues and anti-discrimination campaigns.

These campaigns allow minority groups to share their perspectives as "potential victims" among the larger population. And, at the same time, the Wahid Institute and CMARs are helping to tackle issues of religious violence in the country by embracing marginalised groups to prevent them from becoming extremist.

Persistent promotion of peace and tolerance among religious groups – and in the media – is needed. This includes highlighting innovative initiatives that are shifting attitudes toward mutual respect between religious adherents, regardless of beliefs.

The Indonesian government also has a role to play. Establishing a national commission – representative of Indonesia's diverse religious makeup – to accommodate the aspirations of Indonesia's multi-religious community would promote the development of intensive studies on factors influencing conflict and pluralism.

Towards a pluralistic society

The results from these studies would allow the commission to make informed and effective policy recommendations to the government that would promote the political and social empowerment of religious and ethnic minorities. The commission's recommendations could also be applied at the provincial level.

Without deliberate steps towards the creation of a pluralistic and mutually inclusive society, the violence against religious minorities will continue to tear apart the diversity that has moulded and enriched Indonesia. Religious organisations, the media and the government must work together to make peace and tolerance a priority in Indonesia.

Luther Kembaren is a journalist for the daily Jurnal Nasional newspaper and a participant of the January 2010 training on intercultural reporting organised by the UN Alliance of Civilizations and Search for Common Ground in Jakarta.

Interview with Franz Magnis-Suseno
"Freedom of Religion Must Also Apply to Minorities"
Franz Magnis-Suseno is a German-born Jesuit Priest and professor of philosophy in Indonesia. In this interview with Anett Keller, the naturalised Indonesian citizen talks about Indonesia's anti-pornography law, religious tolerance, and the definition of blasphemy

END_OF_DOCUMENT_TOKEN_TO_BE_REPLACED
Social media
and networks
Subscribe to our
newsletter