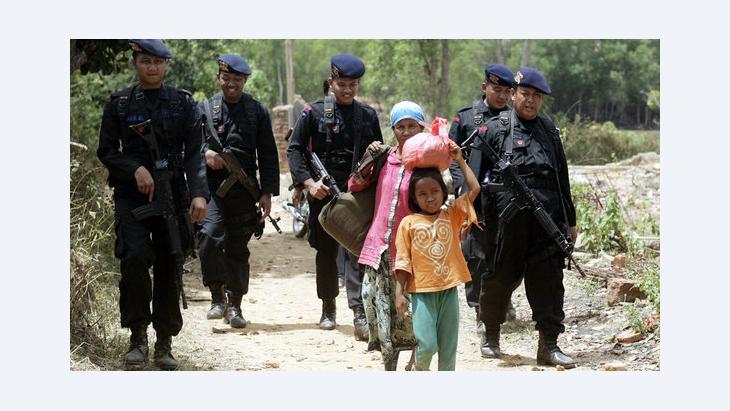 Indonesia has the biggest Muslim population in the world and is often described as a country where people live peacefully side by side, tolerating difference. In reality, however, the targeting of religious minorities has been on the increase for years. By Andy Budiman

Indonesia's brand of Islam is often portrayed by women wearing headscarves smiling in friendly fashion or children playing in front of a mosque. Almost 90 per cent of the island state's 240 million inhabitants are Muslim.

However, this positive image of a country where different communities and cultures interact peacefully with each other contrasts heavily with the reality of the past ten years.

In recent years, there has been an increase in attacks on religious minorities. In mid-February 2013, three churches in South Sulawesi Province were attacked with Molotov cocktails. Last year, a Christian congregation in Bekasi on the outskirts of the capital Jakarta was temporarily forced to pray on the streets because they were not able to use their church after it had been bombarded with bags containing human faeces and urine. 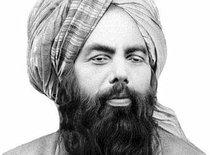 Mirza Ghulam Ahmad (1835–1908) was the founder of the Ahmadi movement (Ahmadiyya). Ahmadis face opposition and even persecution in a number of countries

﻿However, it is not only Indonesia's Christians who fear the rise in violence. There has also been an increase in violent attacks against the country's Muslim minorities. "Studies show that tensions within one religious community are much greater than between religious groups," says Novriantoni Kahar, director of the Indonesia Tanpa Diskriminasi foundation (Indonesia without Discrimination), which carries out research on intolerance.

A poll conducted in late 2012 found that over 40 per cent of those surveyed would not want Shias or members of the Ahmadi community living in their neighbourhood – although both are Muslim groups – in comparison to 15.1 per cent who said they did not want Christians or Hindus as their neighbours.

The vast majority of Indonesia's 200 million Muslims are Sunnis. There are an estimated 100,000 Shias and 400,000 Ahmadis. The Ahmadi community is a religious group that emerged on the Indian subcontinent at the end of the nineteenth century. They consider themselves to be devout Muslims. However, the movement was excluded from the Muslim community just under 40 years ago, and its members are viewed with suspicion and mistrust or are even persecuted in many countries.

In Indonesia, the Ahmadi community has been the target of a number of attacks in recent years. Mubarik Ahmad is the Ahmadi community's spokesman in Indonesia. He complains that members of the community have been intimidated and terrorized since 2005 and that their prayers and activities have been banned in many districts. Back then, the Indonesian Ulema Council (Majelis Ulama Indonesia, MUI) issue a fatwa declaring Ahmadiyya an "errant sect". In early 2011, three people were killed in an attack on an Ahmadi house of prayer.

Another indication of growing intolerance is the fact that people who are discriminated against on religious grounds do not seem to be able to turn to the courts for help. In 2012, a government official in West Sumatra was sentenced to two-and-a-half years in jail for creating a forum for atheists on the social network Facebook. He was found guilty of defaming Islam and insulting the Prophet.

Shift to the right? 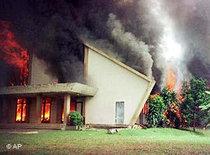 According to Novriantoni Kahar, there has been religious violence in Indonesia for a long time: this picture shows a Catholic Church in Indonesia that was ransacked and set on fire by Muslim mobs as far back as 1998

​​Experts have long been discussing the problem and the causes of the increased intolerance in Indonesia. Novriantoni Kahar, a young Muslim intellectual, say that violence often happens when a country makes the transition from dictatorship to democracy, citing the sectarian violence in Egypt, Libya and Tunisia as examples. "However, the problem is that there has been violence for a long time in Indonesia. The transition has been going on for over ten years already."

William Liddle from Ohio State University, an American expert on Indonesia, has identified an alarming trend in Indonesian politics: "Secular parties such as the Party of the Functional Groups (Golkar) and the Democratic Party are moving more and more to the right. The situation is more dangerous because it is a question of protecting minorities. I believe that Ahmadis and Shias will be targeted even more because they won't be protected by the police or the political system."

Kahar agrees and points out that political parties have not voiced their concern about the cases of intolerance loudly enough. With this shift to the right, he says, many people are more willing to accept acts of violence. According to a poll conducted by Indonesia Tanpa Diskriminasi, almost 25 per cent of the Indonesian population accepts acts of violence to protect religious principles.

Home
Print
Newsletter
More on this topic
Indonesia as a Model of Muslim Democracy: Developments, Problems, and OpportunitiesPersecution of Shiites in Indonesia: Hate Preachers and Incitement to ViolenceViolence against Minorities in Indonesia: Democracy without Tolerance
Related Topics
Democracy and civil society, Human rights, Islam and democracy
All Topics

Research project "The Global Qur'an", brainchild of Professor of Islamic Studies Johanna Pink and sponsored by the European Research Council, analyses the history and ... END_OF_DOCUMENT_TOKEN_TO_BE_REPLACED

At a time when even some rich democracies are electing con men as their political leaders, the success of Indonesian President Joko Widodo deserves wider acclaim and appreciation ... END_OF_DOCUMENT_TOKEN_TO_BE_REPLACED

On the Indonesian island of Java, one librarian has started a mobile library, lending books to children in exchange for plastic rubbish. The idea is that they will learn to take ... END_OF_DOCUMENT_TOKEN_TO_BE_REPLACED

Water buffalo and oxen have been part of the work in Indonesian fields for centuries. But the draught animals are no strangers to sport either, as can be seen in two traditional ... END_OF_DOCUMENT_TOKEN_TO_BE_REPLACED

According to the latest Reuters tally, more than 2.54 million people are now reported to have been infected by the novel coronavirus globally and 177,004 have died. As Muslims ... END_OF_DOCUMENT_TOKEN_TO_BE_REPLACED
Author:
Andy Budiman
Date:
Mail:
Send via mail

END_OF_DOCUMENT_TOKEN_TO_BE_REPLACED
Social media
and networks
Subscribe to our
newsletter