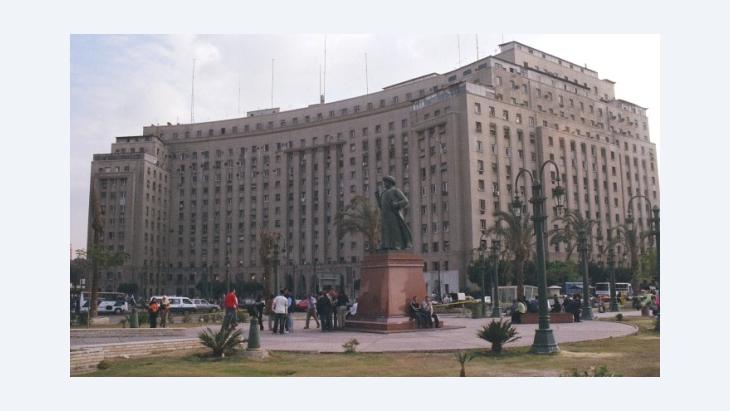 ﻿Sherif Arafa's Terrorism and Kebab from 1992 is one of the few Egyptian film comedies to date to attract international attention. With the current upheavals in the Middle East, the film is now being touted in the press and elsewhere as an early critical work. An objection by Irit Neidhardt

Egyptian mega-star Adel Imam is the Arab world's most famous and best-loved comedian. And its biggest box-office magnet. In Terrorism and Kebab he plays a minor civil servant, the "everyman" Ahmed, who undertakes, in vain, to transfer his children to another school in repeated visits to the Mugamma, the central public and police office for the mega-city Cairo, with some departments in charge of the entire country.

He surfs his way through the sea of bodies crowding the corridors of the government building. Only after several rounds is he able to turn off into the right office. Having arrived at his destination, he finds a woman sitting at her desk hysterically chattering to a girlfriend on the phone. She offhandedly passes Ahmed on to her colleague, a member of the Muslim Brotherhood engrossed in ceaseless prayer.

Between words of praise, he refers Ahmed further, to his brother department head, who is either away at a training course or has left the building to use the toilets elsewhere – he is after all a fine gentleman and does not deem the facilities at his own office good enough for him, says the chatterbox.

A government office as mirror of society

Screenwriter Wahid Hamed uses the scene at the Mugamma to address a whole host of injustices in the Egyptian system. The humour here comes from the grotesque exaggeration of what are already stereotypical characters: 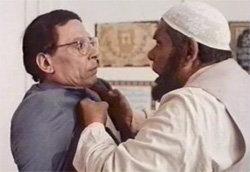 "Grotesque exaggeration of what are already stereotypical characters": Scene from "Terrorism and Kebab"

​​A soldier who, like the village idiot, lets himself be bossed around by a higher civil servant, not only dusting his desk but also babysitting for his children; a shoeshine man on the stair landing who tells Ahmed how he was cheated out of his plot of farmland at the agency; a woman mistakenly arrested for prostitution who refuses to sign a false confession and proceeds to retrieve a whole arsenal of make-up out of her décolleté; and a Nubian who, contrary to the cliché of his underdeveloped race, begins every sentence with "In Europe and the advanced nations".

Ahmed is unable to turn up the department head in any of the fancier toilets in the area. On his way back to the Mugamma he spies an older gentleman on the street whom he earlier heard railing on the bus about the decline of morals and the increasing religiosity and stultification of society. Hoping he might be Brother Department Head, Ahmed sprints back to the government building and announces that he will wait there as long as it takes for his case to be processed.

This gets him into a fight with the Muslim Brother, who just wants Ahmed to let him be. Ahmed says that the office is no place for religion. The two come to blows, the female office worker calls the security guards and, as Ahmed is being arrested, a shot rings out. It has been fired by Ahmed, who keeps hold of the rifle and, slightly confused, declares those still present to be his hostages.

With Ahmed's resolve to take action, the film departs from the genre of comedy. All of the hurdles set up thus far in the story now seem to have been swept away. As Ahmed sprints back up the stairs to the office (the fine gentleman has already been forgotten), the corridors are almost empty, the chatterbox is not talking on the phone for a change, and she is suddenly automatically able to call in the security guards. Only the Muslim Brother continues to pray, thus catalysing the problem.

Wahid Hamed is a successful and well-known screenwriter; stories about him fill whole pages of the newspaper and in the early 1990s his was already a household name. The derogatory depiction of piousness is one of his trademarks, along with provocation and the breaching of taboos. He does not however really delve into the latter, but rather only touches on them in passing without any further discussion.

​​The joke at the beginning of the film, a plaque on which the film crew thanks the Minister of the Interior and the security forces for their understanding and support with the making of the film, is dead serious. The film was shot on location – a rarity for Egyptian mainstream movies – calling for the Mugamma to be evacuated and a genuine police battalion called in. This is of course only possible with the active assistance of the government.

Director Sherif Arafa later became a member of the media team for Mubarak's 2005 election campaign, and in February 2011 he was responsible, together with filmmaker Marwan Hamed, a colleague from the campaign team, for coordinating the compilation film 18 Days, the "film of the revolution". Adel Imam has publicly endorsed Mubarak, even after he stepped down. The honour of his president is after all no laughing matter.

Welcome to the world of Al Qasar, where Arabic music collides head-on with punk and psychedelic to create something powerful and beautiful. "Who Are We" is a raucous, subversive ... END_OF_DOCUMENT_TOKEN_TO_BE_REPLACED

Egyptian authorities have Mada Masr in their sights once again after critical reporting. But the editor of the country's last independent news source is adamant they will continue ... END_OF_DOCUMENT_TOKEN_TO_BE_REPLACED

Like Christianity, Europe's history is one of migration. Both have strong roots in the Orient and in cultures thousands of years old. Cultural historian Bernhard Braun invites us ... END_OF_DOCUMENT_TOKEN_TO_BE_REPLACED

When she ascended the throne, millions of Muslims still lived under British rule. Later, Elizabeth II appealed for tolerance in a multi-religious society. She was the first ... END_OF_DOCUMENT_TOKEN_TO_BE_REPLACED

END_OF_DOCUMENT_TOKEN_TO_BE_REPLACED
Social media
and networks
Subscribe to our
newsletter