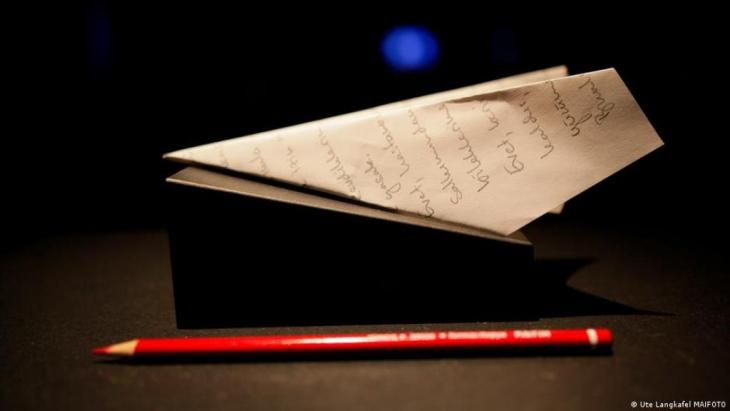 Art in exile: a prison cell as exhibition venue

What form does artistic freedom take in prison? The exhibition "Museum of Small Things" by exiled Turkish journalist Can Dundar explores the topic. By Ceyda Nurtsch

A glass box, 25 square metres in size, contains a toilet, a bed, a table and chair and a sink – nothing more. This artistic installation is a replica of a prison cell at the high-security Silivri prison in Turkey and is entitled Prison of Thought. Next door, the exhibition titled The Museum of Small Things is taking place in a part of Berlin's Maxim Gorki theatre.

The show features a collection of everyday objects political prisoners may have: a telephone card, a paper aeroplane, black tea. In video installations, actors explain how each object is used, providing insight into the lives of the imprisoned, their solidarity, as well as their communication with one another – and their hopes.

The exhibition was curated by Turkish journalist Can Dundar, along with Hakan Savas Mican. Dundar has been living in Berlin since 2016. He incurred the wrath of Turkish President Erdogan's government after reporting on arms deliveries by the Turkish intelligence service to Islamist militias in Syria in 2014. As punishment, he spent three months in pre-trial detention, then went into exile. Should he ever return to his homeland, 27 years in prison await him.

The exhibition was symbolically opened as part of the digital festival "re:writing the future", held in Berlin from 25–28 February 2021, and organised by the Allianz Cultural Foundation, the Maxim Gorki Theater and the Berlin Artists' Program of the German Academic Exchange Service (DAAD), among others. The exhibition will be on view as soon as Berlin's museums re-open. 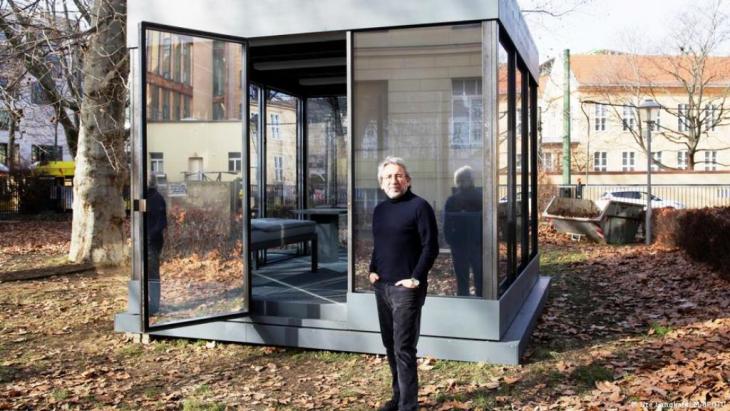 Can Dundar in front of his installation: the journalist, who lives in exile in Germany, was sentenced to 27 years in prison in Istanbul in December 2020 for espionage and supporting terrorism. The German Journalists' Association (DJV) criticised the sentence against Dundar as an 'act of barbarism'. "Can Dundar has investigated, reported and uncovered – that is good journalism, not a crime," said DJV Federal Chairman Frank Ueberall in Berlin

Prison as art – art in prison

Since the coup attempt in July 2016, journalists, opposition politicians, academics, and cultural workers in Turkey have found themselves subject to increasingly harsh repression. Many are imprisoned, while the Turkish government stubbornly maintains that only those who have engaged in terrorist activities have been jailed. Many have chosen to leave Turkey and live abroad in exile.

But how does artistic freedom take shape in prison or in the foreign land of exile? How is resistance documented? In the virtual panel "Undoing Prison", which also took place as part of the digital festival, Dundar explored these questions in conversation with writer Asli Erdogan, Kurdish artist and journalist Zehra Dogan, and sociologist Nil Mutluer. All participants in the conversation live in Berlin.

"We didn't want to create a Madame Tussauds museum where visitors can look at how horribly people were once treated," Dundar says, explaining his exhibition. "This is still the current situation. We wanted to show that there is indeed repression, but there is also resistance." 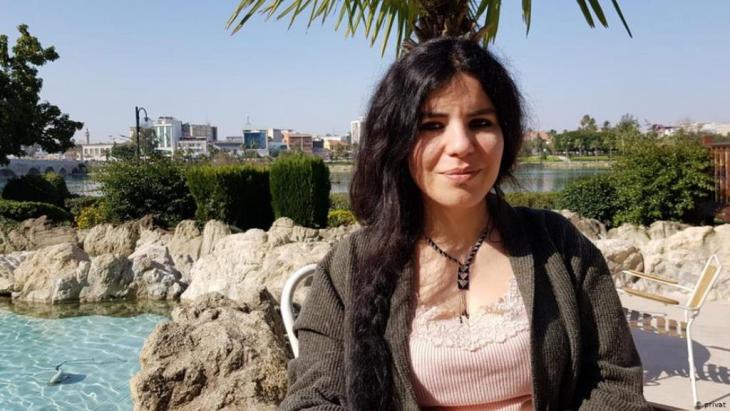 Defending residual freedom behind bars: while serving just under three years in prison, the artist and journalist Zehra Dogan endeavoured to remain artistically active, with the means available to her in prison

Remnants of freedom even in detention

Kurdish artist and journalist Zehra Dogan knows what it means to struggle to maintain some semblance of freedom in prison. She grew up in eastern Turkey, "in an atmosphere of annihilation", as she describes it. In 2016, she was imprisoned for her image of the city of Nusaybin during the state of emergency imposed by the AKP government after the 2016-18 coup attempt.

But even during her nearly three years in prison, Dogan tried to stay artistically active with the means available to her. One artwork shows a bent-over woman's body onto which she has sewn her hair that fell out while she was in prison, stained with menstrual blood.

Time in prison leaves deep scars. For the physicist and writer Asli Erdogan, it destroyed her relationship with language in particular. She was imprisoned for around five months along with 100 other intellectuals. She was sent to prison for symbolically taking over the editorial management of the Turkish-Kurdish newspaper Ozgur Gundem (Free Agenda) for one day in an act of solidarity.

Language in exile – writing as homeland

The Turkish state declared an article published that day to be terrorist propaganda and held her responsible. Although Turkish was her native language, she says prison destroyed her relationship to it. "Turkish quickly became the language of authority. I resent that," she said. 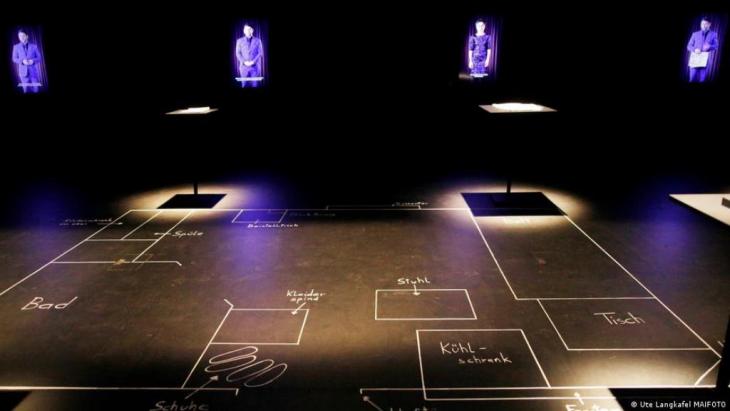 A political installation about the situation in Turkey: in Turkey, the number of investigations and indictments for presidential insults or terror propaganda has exploded in recent years. Not only politicians, journalists or activists, but also academics and ordinary citizens have been affected. Artists and cultural workers are also increasingly being targeted by the investigating authorities

Kurdish artist Zehra Dogan has long known what alienation to one’s mother tongue by Turkish authorities can mean. She remembers being beaten by her teachers when she was five years old because she only spoke Kurdish and did not understand Turkish.

Can Dundar had to learn in exile that uprooting oneself also affects one's own language. For him, another painful experience: life in a foreign country does not mean freedom. "You are held hostage. Everything you say can be used against your family back home," he said. "Even if you are not in prison, you are not free. Because one's word is not free." A country where one is not free cannot become one's own country, he says. Only one's own writing becomes a kind of homeland, he adds.

Europe needs to take a stand for the oppressed

As part of the Berlin festival, human rights lawyer Veysel Ok also reported on the increasing authoritarianism and the greatly reduced spaces for artists and journalists in Turkey. He has called on Europe to take a stand for all of those oppressed, not just the big names. "European leaders and activists are mainly committed to well-known names such as the writer and journalist Ahmet Altan," he said. "But not for the Kurdish people who are unknown in Europe. They should be represented as well."

In realising The Museum of Small Things, Can Dundar has fulfilled a dream. He would like to bring the exhibition to Turkey. But his main goal, he says, is to go to Silivri prison once again – to visit it like a visitor to a museum.

Translated from the German by Sarah Hucal

Istanbul Off spaces in dialogue: Fear of God and reciprocal visits

The Arter, art and gentrification: Modern art makeover in Istanbul?

Among Muslims, the image of women as "cossetted hijab-wearing princesses" is frequently invoked. But Muslim women have long wanted to be more. In her essay, Karoline Roscher- ... END_OF_DOCUMENT_TOKEN_TO_BE_REPLACED

The USA and NATO plan to withdraw from Afghanistan by September. The operation is risky, the outcome uncertain. Many Afghans fear civil war. The quake on the Hindu Kush will also ... END_OF_DOCUMENT_TOKEN_TO_BE_REPLACED

Even in times of war and pandemic, refugees are still being deported to Afghanistan. Several deportation flights have taken place in recent weeks alone. Since those affected often ... END_OF_DOCUMENT_TOKEN_TO_BE_REPLACED

On 7 March, Switzerland became the latest European country to vote in favour of a so-called "burka" ban. It was yet another feather in the cap of the right-wing populist Swiss ... END_OF_DOCUMENT_TOKEN_TO_BE_REPLACED

German Middle East analyst Guido Steinberg and television journalist Ulrich Tilgner have both published new books on the conflicts in the Middle East. Their analyses and their ... END_OF_DOCUMENT_TOKEN_TO_BE_REPLACED

END_OF_DOCUMENT_TOKEN_TO_BE_REPLACED
Social media
and networks
Subscribe to our
newsletter