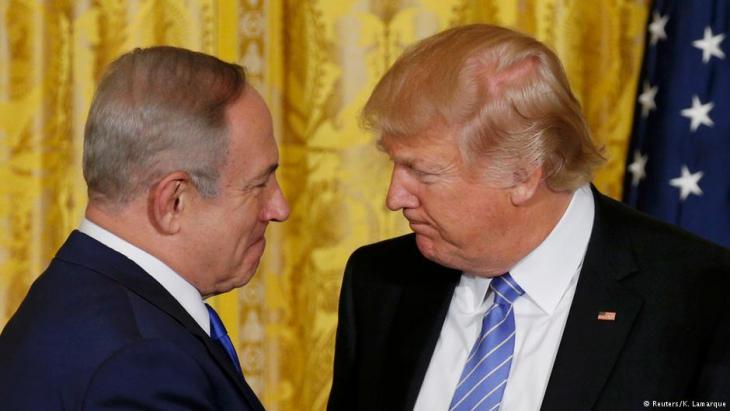 Expect nothing from Trump

While the US continues to turn a blind eye to settlement expansion, the international community and the EU in particular are left with the responsibility of ensuring that everyday life in the Palestinian enclaves does not collapse. Time for a rethink, argue policy analysts Sam Bahour and Mousa Jiryis

If Donald Trump′s statements about abandoning the two-state solution are actually true, then a sovereign Palestinian state is no longer consistent with US foreign policy. Indeed, most commentators would be inclined to agree that this era will witness an unprecedented acceleration in settlement building and retroactive licensing of outposts built on private Palestinian land. Donald Trump, it appears, will do nothing to stop or rebuke such a policy, having watered down the tired old US rhetoric of ″settlements are an obstacle to peace″ to settlements ″may not be helpful″ to peace. So their construction can continue, indefinitely.

In light of this reality, Europe must recognise that ″the US leads″ approach to resolving the conflict is doomed to failure. There appears little possibility of the elusive peace happening anytime during Trump′s presidency. Historically, the US-leads approach has typically served to give Israel′s settlement enterprise time and space to further entrench itself, thereby making the realisation of a two-state solution increasingly impossible. It is blindingly clear – in light of two decades of failed negotiations under US auspices – that US leadership of conflict resolution efforts is pointless and counter-productive.

If Europe′s policy is to achieve two states for two peoples, it will have to pursue an independent policy position that circumvents the Americans. Europe′s political influence in this arena has long been negligible, given US primacy in conflict resolution.

In short, Europe has relied on the wrong leadership for too long. This tragic, historic mistake has not only cost European taxpayers billions, but has also led to a reality that is the diametric opposite of what European policy-makers intended. After 24 years, reliance on American ″leadership″ has led to the creation of numerous Palestinian Bantustans, surrounded by an occupying military power that continues to occupy with impunity, bankrolled by European taxpayers: the EU and its member states are by far the largest donors to the Palestinians. 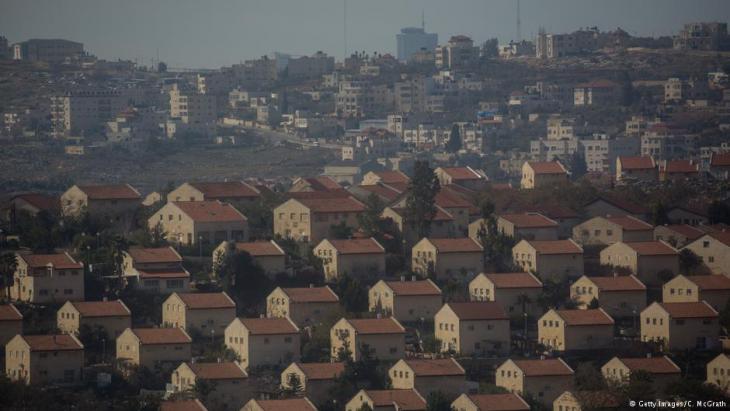 ″Historically, the US-leads approach has typically served to give Israel′s settlement enterprise time and space to further entrench itself, thereby making the realisation of a two-state solution increasingly impossible. It is blindingly clear – in light of two decades of failed negotiations under US auspices – that US leadership of conflict resolution efforts is pointless and counter-productive,″ write Bahour and Jiryis

Israel – delighted that another party is willing to subsidise its military occupation – continues to expand and consolidate its settlement enterprise, with the support of large sections of the American public and government.

Historically, the US and EU have shared a common objective of resolving the Israeli-Palestinian conflict through the framework of a two-state solution. With the assumption of Trump to the presidency, the Republicans now control all three branches of US government, with majorities in both the House and Senate. This has coincided with a significant shift to the right in the GOP′s policy to Israel-Palestine. By contrast, Europeans have moved towards recognition of the State of Palestine. Sweden′s recognition is now official while parliaments in the United Kingdom, Ireland, Spain, France, Luxembourg, not to mention the European Parliament, have all approved recognition.

America is part of the problem

America supports occupation. Europe inadvertently subsidises occupation. This regrettable logic is an accurate description of current reality. The Trump administration will do little to antagonise its own party or risk the wrath of Israel′s influential pro-settlement lobby in the US. Trump will continue to advocate a hands-off, ″it′s up to the two parties to decide″ approach. As a result, Israel, which has all the power, has little incentive to concede, while the Palestinians, who have no power, and are supposedly ″protected″ under international law, are left to their despair.

The continuing domination of mediation efforts by the US has created a perverse reality which dictates that there is no peace; and no traction towards peace at any time in the near future. While commentators have busied themselves picking at the rotting carcass of the so-called peace process and apportioning blame for its failure, few have dared to state the obvious: America is part of the problem, not the solution.

Protected by its patron

Israeli intransigence and blatant violation of international law is fuelled by its belief that, no matter what it does, the US will always insulate it from meaningful rebuke. Palestinian desperation is driven by a conviction that America′s overwhelming support to Israel makes negotiations pointless, as Israel has little incentive to concede when it receives so much money, weapons and political support for its settlement project. 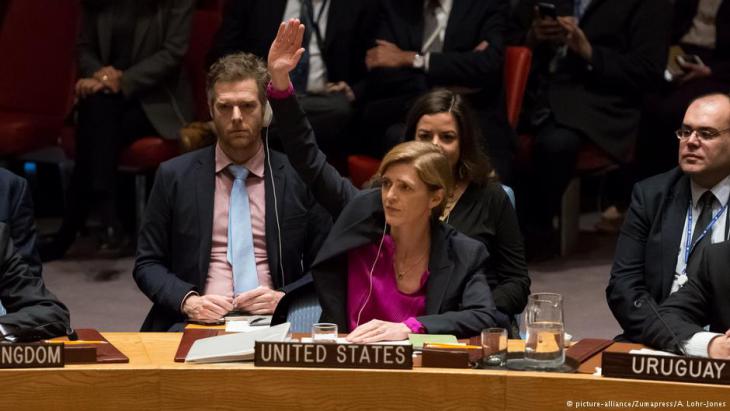 Charade of impartiality: "America supports occupation. Europe inadvertently subsidises occupation. This regrettable logic is an accurate description of current reality. Trump will continue to advocate a hands-off, 'it′s up to the two parties to decide' approach"

In summary, under Trump′s leadership, the US will undoubtedly turn a blind eye to settlement expansion, while the international community and the EU in particular will be left with the responsibility of ensuring that everyday life in the Palestinian enclaves does not collapse, through massive injections of aid monies – a state of affairs inspired by Israeli excesses ad infinitum made possible by US support or indifference.

So what can Europe do? Europe can ′roll up its sleeves′, play power politics and take on the occupier, without waiting for American leadership to produce results. If the experiences of Bosnia, Kosovo, East Timor and South Africa are anything to go by, an occupier or an apartheid regime will only change its ways with a nuanced combination of sanctions, international isolation and, as a last resort, military force.

The EU must rise to the occasion and demonstrate to its constituents that European money and credibility are more important than indulging in American charades of impartiality. It is clear that America has no moral or political qualms with Israel remaining an occupying force.

Once Europe finally acknowledges this reality and moves on, it will find the strength and legitimacy to propose policies of its own, in line with its European neighbourhood objectives and its own moral standards.

Sam Bahour and Mousa Jiryis are policy analysts with Al-Shabaka: The Palestinian Policy Network. An earlier version of this commentary was published by Al-Shabaka and can be accessed by clicking here.

Reading Hassan Blasim's God 99 is an immersive experience of grief and exaltation, anger and disgust, writes Marcia Lynx Qualey. We join the Iraqi narrator as he sits around in ... END_OF_DOCUMENT_TOKEN_TO_BE_REPLACED

Turkey's parliamentary and presidential elections are scheduled for June 2023. But they are already casting a shadow. While the opposition is calling for early elections, ... END_OF_DOCUMENT_TOKEN_TO_BE_REPLACED

Recep Tayyip Erdogan, disappointed by the European Union’s reluctance to integrate Turkey into its ranks, has re-directed his country’s diplomacy toward the Maghreb and Africa to ... END_OF_DOCUMENT_TOKEN_TO_BE_REPLACED

A law is currently being debated in Morocco that would legalise the cultivation and export of medicinal cannabis. For many small farmers, this would bring considerable advantages ... END_OF_DOCUMENT_TOKEN_TO_BE_REPLACED

Philosopher Juergen Habermas was due to be awarded a major Arab prize in Abu Dhabi, but has turned it down following criticism. This decision torpedoes Arab efforts at a ... END_OF_DOCUMENT_TOKEN_TO_BE_REPLACED
Author:
Sam Bahour and Mousa Jiryis
Date:
Mail:
Send via mail

END_OF_DOCUMENT_TOKEN_TO_BE_REPLACED
Social media
and networks
Subscribe to our
newsletter