Skip to main content
Revolutions in the Middle East

Arab "Republics of Fear" at an End?

The recent protests in the Arab world have shown that military deterrence alone can no longer keep demonstrators at bay. Yet, how long can these autocratic systems remain in place? Birgit Kaspar reports from Beirut 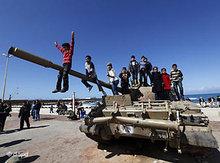 Triumph over a repressive and decrepit system: Libyan children play on a destroyed tank that belonged to Gaddafi's troops after rebels took control of Benghazi

​​ The Libyan dictator Muammar al-Gaddafi is fighting for the survival of his brutal regime. Yet, in terms of military support, he can only count on mercenary troops and a few elite units commanded by his sons. As was the case in Tunisia as well as in Egypt, a large section of the army is not prepared to fire upon their own countrymen in order to bring the protests under control. The formula whereby citizens are suppressed through violent means appears not to be valid anymore.

Although deaths are reported daily in the wake of demonstrations in Libya, the protesters continue to demand an end to the regime. Imad Salamey, a political scientist at the Lebanese American University in Beirut, sees this as a clear sign of the end of the so-called Arab "republics of fear". "People simply aren't as afraid to risk dying for their freedom. They have learned how to demolish this old wall of fear." 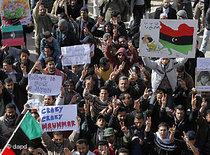 ​​ The reason, according to Salamey, is that the people no longer merely regard themselves as citizens of isolated countries, but now see themselves as belonging to the greater global community. The days when such countries could be sealed off while their regimes massacred the population are over. This has given the people the power to emancipate themselves. It will therefore be difficult for Arab regimes to return to business as usual, stresses Salamey.

The military unwilling to prop up rulers

The greater the violence that dictators employ against the demonstrators, the more determined they are in their protest. The formula used by autocrats until now to protect their regimes no longer seems to work. People in Egypt, Tunisia, Libya, and other Arab states have overcome their fears.

In addition, a large section of the military is no longer prepared to shed the blood of their countrymen in order to defend decaying regimes. One of the reasons for this is that protests have not been aimed against the military per se, stresses Paul Salem from the Carnegie Foundation for International Peace. 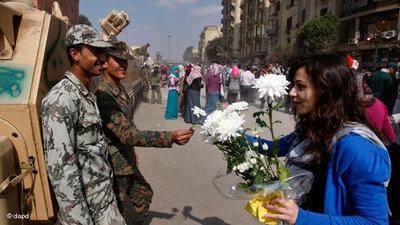 A sign of support for the army's position during the January 25th revolution: An Egyptian woman presents flowers to two soldiers on Tahrir Square in Cairo

​​ The protests are instead directed against the political leadership and their entourage. "As such, the army has been confronted with a decision – it doesn't have to fight against the people to save itself, but solely to ensure the survival of the leader."

The soldiers were not prepared to make such a sacrifice. Another contributing factor, says Salam, might be that even the soldiers knew how corrupt the regime was and that only a small circle of insiders has profited from this corruption. Certainly not the simple soldiers. On the contrary, they share the concerns and misery of society, of which they are a part.

The role of the West and the media

The political scientist Salamey also points to the fact that in an uncertain political landscape, it is important for the military to maintain its respected standing in the country and as an institution. "The soldiers don't want to be isolated, either in their own country or globally. This would endanger their own survival."

The case of Bahrain has shown what can happen when the West expresses its disapproval of the army being deployed against demonstrators. After the army had fired on civilians, Britain and France immediately froze their military support. Washington admonished its ally King Hamad, insisting that violent suppression of the protests was unacceptable. Since then, Bahrainis have been able to peacefully express their opinions. 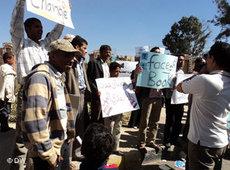 Revolution of the Facebook generation: Internet activists in Yemen demonstrate for more rights and freedom of expression via the World Wide Web

​​ This transformation in the Arab world has been aided by the modern media. Images and news of deserting soldiers and those celebrating their liberation from the yoke of suppression have been transmitted to the most remote corners of the Arab world.

Satellite television, the Internet, and social media such as Facebook and Twitter have provided comprehensive and almost immediately accessible documentation of events. This has helped to unite people and break through the wall of fear.

The collapse of police states

The attempt to end demonstrations for democracy and more rights through the use of force has proved to be an outmoded method that no longer functions. Paul Salem goes one step further. "This is not only the collapse of a model of military deterrence, it is the collapse of the complete system of Arab autocratic police states."

It has ceased to work in any respect, whether politically or economically, or in terms of the generational conflict, in which the elderly generation of rulers stands opposed to the country's dynamic youth. Yet, it remains to be seen what new model Arab republics will choose to replace this violence prone gerontocracy.

Unrest in the Arab World
The Battle for Bahrain
The uprising in Manama differs from the recent mass protests that toppled long-time rulers in North Africa. In his essay, Barak Barfi expresses the opinion that sectarianism and the security forces' complete loyalty to the monarchy seriously diminishes the likelihood of peaceful regime change in Bahrain

END_OF_DOCUMENT_TOKEN_TO_BE_REPLACED
Social media
and networks
Subscribe to our
newsletter