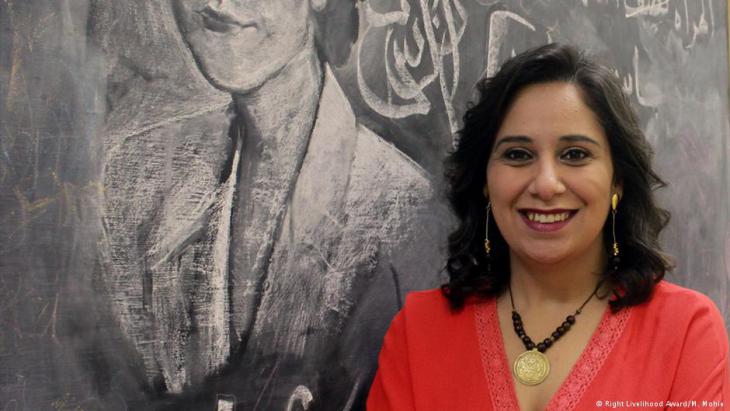 ″Now′s the time to be creative″

Freedom of the press and freedom of assembly in Egypt have practically ceased to exist. Freedom of speech is under massive pressure – even online. Meanwhile the Egyptian regime is continuing its campaign against civil society with a new law featuring unprecedented measures to control and monitor NGOs. Sofian Philip Naceur talks to the director of the Cairo-based NGO Nazra for Feminist Studies, Mozn Hassan

Ms Hassan, you are currently facing both a travel ban and an asset freeze. How has this come about?

Since than, the case has switched its focus to local entities, yet it remains committed to trying NGOs for accepting foreign funding. We are accused of receiving donations from abroad for illegal purposes, thereby bringing shame on Egypt. Nazra was included in the sweep in 2012. In March 2016, the judges summoned three of Nazra's employees to present themselves in court as witnesses for the prosecution – and against me.

The judges wanted to open an investigation, so I was summoned as a defendant, but the case was postponed and I was issued with a travel ban. The judges requested that the authorities freeze both my personal assets and the assets of Nazra. During the last court session on 14 December, the asset freeze and travel ban against Azza Soliman, who works with the Centre for Egyptian Women's Legal Assistance, was confirmed. Her case is the hardest one so far. My verdict has yet to be pronounced. We expect it to be issued during the next hearing on 11 January.

You have told your staff to look for new jobs. Will you have to shut down Nazra?

Hassan: The whole issue is very problematic, because if they freeze our assets, it means that the Ministry of Social Solidarity has the right to close Nazra's bank accounts. However, freezing the assets doesn't mean that this legal organisation is closed. I think the state mainly wants to stigmatise Nazra. As a result, we have left it up to the staff to decide whether they stay on or look for new jobs. We don't think they will close Nazra by freezing the assets. If you freeze the assets of an organisation, it does not make the organisation illegal. It only means that the entity in question is not supposed to receive money. Since Nazra is part of a movement, I believe that this is about more than just the money, it is about the people who are working for Nazra and the public debate relating to our work.

If you have to shut down Nazra, will you continue working?

Hassan: I think we will. We will work out how to frame it in a legal way – we′re not about to give up. Now′s the time to be creative. The team has the passion and determination to continue despite the current legal challenges.

Other NGOs in this case have been far more outspoken in their criticism of the government. Why are you being made to stand trial?

Hassan: I don′t like that premise. It presupposes that feminism by nature is not critical. Something with which I heartily disagree. Criticising the state for torture is considered more important than saying that there is systematic sexual violence against women in Egypt. The patriarchal Egyptian state is the only body that is allowed to say that sexual violence exists; the people are not allowed their say. There is a prevailing attitude that women are cute and feminism is a cute thing. The state considers the National Council for Women run by privileged women working for the state as the only place to discuss these things. The state is basically attempting to co-opt the whole feminist discourse.

This becomes clear when you look at the history of the Egyptian feminist movement and the case of Doria Shafiq in the 1950s, a well-known feminist who occupied the Egyptian parliament in 1951 to present a list of demands to the parliamentarians. Together with activists of the NGO Bint al-Nil, she demanded – along with other constitutional rights, such as banning polygamy – that women should have the right to vote.

Some years later, Bint al-Nil was banned and Shafiq put under house arrest for 18 years while Egypt's President at that time, Gamal Abdel Nasser, granted women some rights in a constitutional reform. So the state gave women rights but stigmatised the woman who was demanding them in the first place. We are very much connected with Bint Al-Nil. The state did the same to them. They froze their activities and banned them. By the way, the day of our court case – 14 December – is Shafiq's birthday.

The Egyptian feminist Mozn Hassan founded the NGO Nazra for Feminist Studies in 2007. Fielding a staff of twenty, Nazra is committed to fighting for women′s rights in Egypt and the entire Middle East. For years the organisation has kept a record of sexual assaults and ensured victims have access to medical, psychological and legal assistance. In 2014, Nazra together with a number of other women′s organisations managed to get women′s rights anchored in the Egyptian Constitution; the definition of what constitutes a sexual offence in the Egyptian penal code was also expanded. Mozn Hassan also provides support for women standing for political office

The new law is not the first attempt at silencing Egypt's civil society. Why is this law different?

Hassan: This law comes at a time when the local and international public are no longer behind us. For a while, the government tried to amend the law from 2002. Luckily, we were able to call on either local or international support. Today, local discourse has turned against us. Human rights organisations are blamed for not helping the state and those who work for NGOs are branded spies. And at an international level no-one is interested in Egypt these days.

Another difference is how the law was passed. It was approved by the parliament in less than 48 hours without any public debate. Hundreds of MPs surprisingly presented a draft law which differs from the governmental draft. The law presented by the parliament was even worse than the governmental draft. President Abdul Fattah al-Sisi has yet to sign the law, since he wants parliament to review it. Parliament however is dragging its heels. So we are stuck in legal limbo.

How did the two drafts differ?

Hassan: The government draft mainly targeted us as human rights organisations; it was designed to put us under a lot of pressure concerning our activities, funding from abroad, not to mention international relations: one of the things they did not want to see was that we have international ties. The draft submitted by parliament is even more problematic, because it is also targets local funding for the first time. It says that all funding within Egypt has to be approved by the government. So we are not only talking about human rights groups, but also about development and charity organisations.

The law also introduces a committee to oversee all NGO activities – it's composed of members from the Ministry of Defence, Homeland Security, General Intelligence, the Central Bank and a number of other governmental entities. Not only is it targeting human rights NGOs, but civil society as a whole. It reflects the philosophy of those who fail to comprehend the concept of civil society, who believe that the money of any NGOs should be controlled by the state.

Home
Print
Newsletter
More on this topic
Azza Soliman, an Egyptian feminist at risk: "What has Azza done?"Interview with Nawal El Saadawi: "They don't want any really courageous people!"Mona Eltahawy: "Why do you hate us so?": The Middle East needs a sexual revolution
Related Topics
Abdul Fattah al-Sisi, Democracy and civil society, Free speech and censorship, Freedom of the press, Human rights
All Topics

Surging coronavirus cases in many parts of the world have overshadowed the start of this year's Muslim holy month of Ramadan, with festivities once again curtailed by contagion ... END_OF_DOCUMENT_TOKEN_TO_BE_REPLACED

The Prophet Muhammad never executed anyone for apostasy, nor encouraged his followers to do so. Nor is criminalising sacrilege based on Islam’s main sacred text, the Koran. In ... END_OF_DOCUMENT_TOKEN_TO_BE_REPLACED

Televised Turkish dramas are all the rage in the Middle East. A young Ottoman TV Empire has been expanding its soft power by harnessing regional dialects, Arabic names and viewers ... END_OF_DOCUMENT_TOKEN_TO_BE_REPLACED

German Middle East analyst Guido Steinberg and television journalist Ulrich Tilgner have both published new books on the conflicts in the Middle East. Their analyses and their ... END_OF_DOCUMENT_TOKEN_TO_BE_REPLACED

Nawal El-Saadawi has died in Cairo at the age of 89. The prominent doctor, activist and author became internationally known for her outcry against female genital mutilation and ... END_OF_DOCUMENT_TOKEN_TO_BE_REPLACED

As the globe races to inoculate against coronavirus, Egypt President Sisi’s regime plans to profit from the essential shot. Making Egyptians pay for their own vaccines is part of ... END_OF_DOCUMENT_TOKEN_TO_BE_REPLACED
Author:
Sofian Philip Naceur
Date:
Mail:
Send via mail

END_OF_DOCUMENT_TOKEN_TO_BE_REPLACED
Social media
and networks
Subscribe to our
newsletter