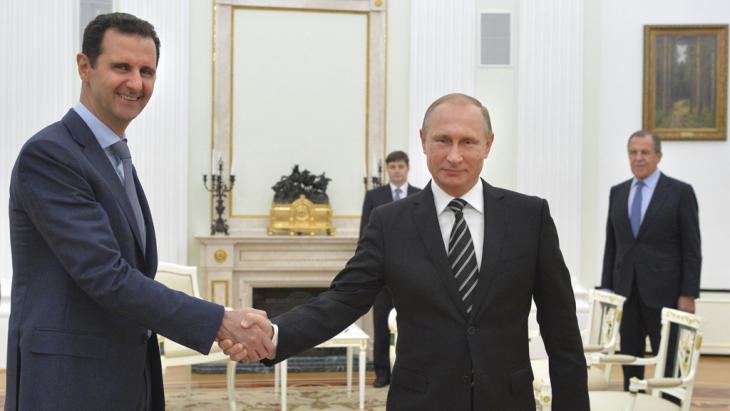 Russia and the Syrian conflict

For there to be any hope of an end to the war in Syria, Moscow has to realise that an orderly handover of power in Damascus is in its own interest, writes Kristin Helberg

Regardless of how one evaluates Russia's role in Syria – to mercilessly and effectively bombard civilians so as to save an unscrupulous mass murderer, to take crude, bruising military action with a view to boxing through its regional interests, or to use clever tactics to position itself as an indispensable world power – Vladimir Putin has certainly made sure of one thing: the road to peace in Syria leads through Moscow. The reason for this is that of all Assad's supporters, Russia is the only one that can do without Assad (unlike Iran) and has both the political and the military clout to force him into a retreat. Consequently, anyone who wants to resolve the conflict must convince the Russian president that Russia's interests are best served by a transfer of power in Damascus.

Here are the four most important arguments in this respect. First up: Syria's statehood, which everyone – Russians, Americans, Iranians, Turks and Saudis alike – wants to preserve, but which is already disintegrating. The fact of the matter is that Syria as a state can only be saved without Assad; the president is not a guarantee of Syria's statehood, he is a threat to it. This first argument is inextricably linked to the second: the state of the Syrian army, whose ineffectiveness and lack of morale is driving the Russian military to despair. Thirdly, the terrorist threat to Russia does not decrease when everyone in Syria focuses on combating 'Sunni terrorism', it increases.

As long as foreign Shia militias are allowed to murder as they please on Assad's behalf, the radicalisation of Syria's majority Sunni population will continue. Fourthly, Putin has basically done what he set out to do. This is why the time has come for a post-war order without Assad from which Moscow can safely withdraw, safe in the knowledge that Russia's interests are safeguarded even without Assad.

But first to the Syrian state: whenever international and regional players speak of preserving state structures, they generally end up making the case for Assad. After all, it is alleged that only the regime can guarantee these state structures at this point in time. The horror scenario goes something like this: 'if Assad falls, there will be anarchy, jihadis will step in and fill the power vacuum and the country will descend into chaos.' In other words, the fear is that Syria will become another 'failed state'.

In view of this fear, it is worth taking a closer look at the condition of the Syrian state in order to understand how it can be saved. In doing so, two things become apparent. 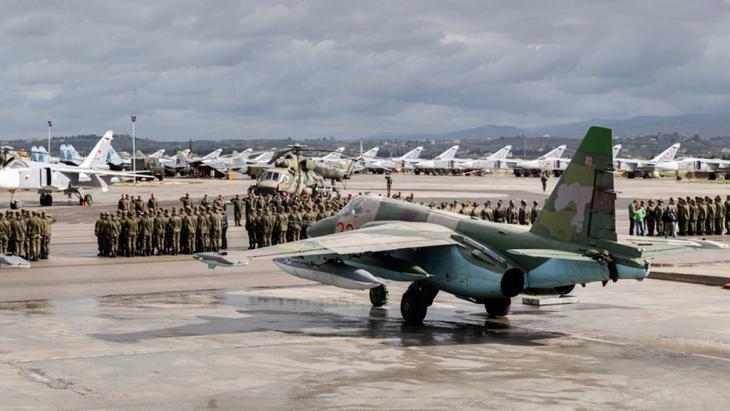 Escalating the war in Syria: one year ago, Russia became involved in the Syrian civil war. Moscow′s self-declared "War on Terror " has become a huge military operation, which has had an even more devastating effect on Syria′s suffering civilian population

Firstly, above all else, the purpose of state institutions in Syria is to keep Assad in power. Over the course of several decades, the military, security forces, judiciary, party and administration have been turned into crutches for Assad's rule and act in the current conflict as the president's personal tools for staying in power.

Unlike in Egypt and Tunisia, neither the military nor the police respectively play an independent role in Syria. Both have been completely appropriated by Assad, which explains why he has been able to hold on to power. This is why the first step must be to liberate the Syrian state from Assad's influence so that the necessary structures, which would serve the Syrian people and not their oppressor, can develop.

Germany’s electorate includes some 7.4 million citizens with international roots, while many more millions of residents from abroad aren’t allowed to vote. Both groups are often ... END_OF_DOCUMENT_TOKEN_TO_BE_REPLACED

The disappearance of Razan Zeitouneh and her colleagues has been one of the greatest mysteries of the Syrian war – until today. DW's investigative unit hunted clues across six ... END_OF_DOCUMENT_TOKEN_TO_BE_REPLACED

Millions of people in Syria's Idlib region depend on foreign aid that passes through only one border crossing. The UN mandate regulating passage through it will expire on 10 July ... END_OF_DOCUMENT_TOKEN_TO_BE_REPLACED

By stage-managing his re-election in a poll widely dismissed as a farce, Syria's President Bashar al-Assad has killed two birds with one stone: he has forced his compatriots to ... END_OF_DOCUMENT_TOKEN_TO_BE_REPLACED

Although a unity government was formed in Libya in March 2021, tensions and possible crises between the political actors are already emerging. What problems does the country face ... END_OF_DOCUMENT_TOKEN_TO_BE_REPLACED
Author:
Kristin Helberg
Date:
Mail:
Send via mail

END_OF_DOCUMENT_TOKEN_TO_BE_REPLACED
Social media
and networks
Subscribe to our
newsletter