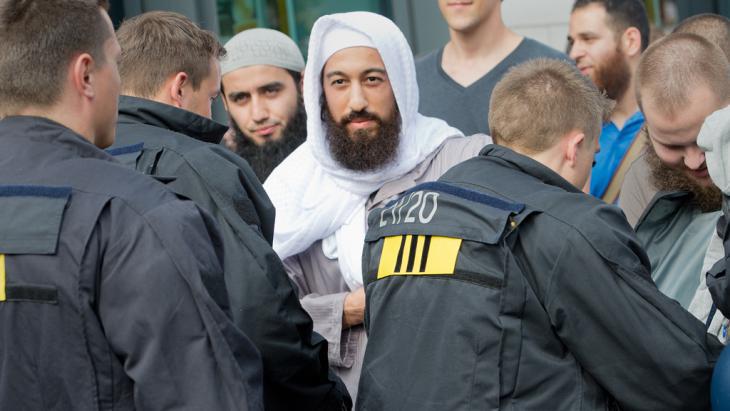 Salafists in Germany have been on a recruitment drive for quite some time: handing out flyers and free copies of the Koran in city centres. They are also targeting young people at schools, on the Internet and anywhere where young people meet. How can young people be protected? By Arnfrid Schenk

A boundary runs across Platz der Deutschen Einheit in the city of Offenbach. From the Caritas church welfare organisation on one side to a sex shop on the other, a police barrier divides the public square into two halves on this Saturday afternoon in late June. The Salafist preacher Pierre Vogel has announced that he will be holding one of his open-air events here on his current tour of Germany. The theme of the event in Offenbach is "Sharia: barbaric or perfect?" The event draws some 200 supporters, 400 demonstrators and several dozen journalists.

A truck is used as a stage. Pierre Vogel is running late; his fellow Salafist, the convert Abu Adam, formerly known as Sven Lau, is speaking on the stage. Only recently, Lau was released from pre-trial detention, accused of supporting jihadist groups in Syria. The charges were dropped because the evidence against him was too vague.

His supporters nod in agreement. There are a surprising number of women here, standing to the left of the stage near the speakers, all wearing headscarves, many veiled from head to toe with only a slit left free for their eyes. Some are carrying bags printed with "Islam.ist.in" – a pun on the German word for a female Islamist and the phrase "Islam is in". In the middle and on the right are the men, many in sports clothing, most with beards, even a few converts sporting Arab robes. 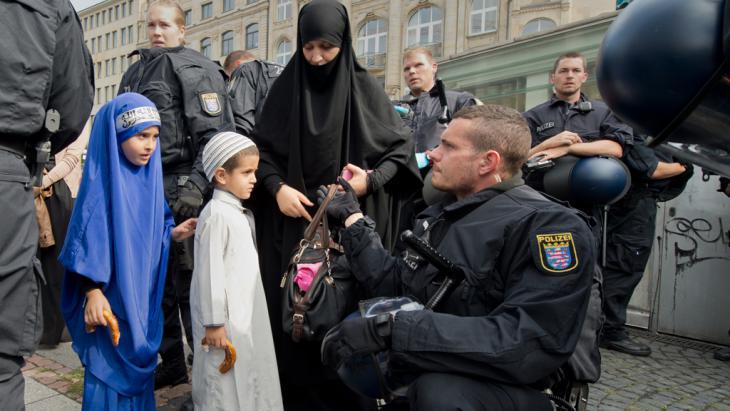 A German police officer checks a woman's bag at a Salafist rally in Frankfurt on Main on 7 September 2014. There are almost five million Muslims in Germany. About 6,000 of them are active in the Salafist scene. "Not all Muslims who call themselves Salafists are radical extremists who want to join the jihad in Syria. But all those who have gone there to fight had previously been in contact with Salafist groups," writes Arnfrid Schenk

Salafists are Muslim fundamentalists who want to set up a theocracy, placing Sharia, the Islamic legal system, above Germany's Basic Law. Their sources of rules for all questions of human coexistence are the Koran and the words of the Prophet Mohammed as passed down in the hadith. Anyone who lives by these rules, they believe, will be rewarded in paradise; everyone else will go to hell.

Of the almost five million Muslims in Germany, the domestic intelligence service estimates that there are about 6,000 in the Salafist scene. This can be subdivided into several groups. There is the purist movement, which is concerned only with living a life that is agreeable to God. Then there is a political one, which strives for an Islamic state by converting others to their cause but rejects violence. This is the largest subset. Then there is the jihadist branch, which is prepared to use violence and terrorist means. Not all Muslims who call themselves Salafists are radical extremists who want to join the jihad in Syria. But all those who have gone there to fight had previously been in contact with Salafist groups.

For some months now, the Salafists have no longer been a matter of concern for the intelligence service alone, but also for teachers, social workers and parents. The reason for this is that activists have begun recruiting around schools and youth clubs in Hamburg, Berlin, the state of North Rhine-Westphalia and above all in the Frankfurt region. They hand out leaflets, set up stalls and distribute free copies of the Koran. Some openly call for young people to join the jihad in Syria; a few seem to have been successful. Experts estimate that around 500 young men from Germany have gone to join the civil war in Syria to date. About 100 of them have come back; 25 have been killed. Some of them were still of school-going age.

A young man in his early twenties is doing the rounds on the square in Offenbach with a grey plastic bucket. He's collecting donations; he's not quite sure what for. Some kind of aid organisation. Why is he here? He says he's currently doing a technical apprenticeship. He's nearly finished and after that, he'd like to go to university and do Islam Studies or something like that. His parents aren't religious; his father's Turkish, his mother's Serbian; religion's not important to them. It never used to be for him either, but then he started to feel empty inside and he had to fill that emptiness. Islam was there to fill the gap.

Why doesn't he just go to the mosque? Why is he drawn to the Salafists around Pierre Vogel, who's just coming on stage? He doesn't understand what the imams preach in the mosque, says the collector. Even when they speak German it has nothing to do with his life. 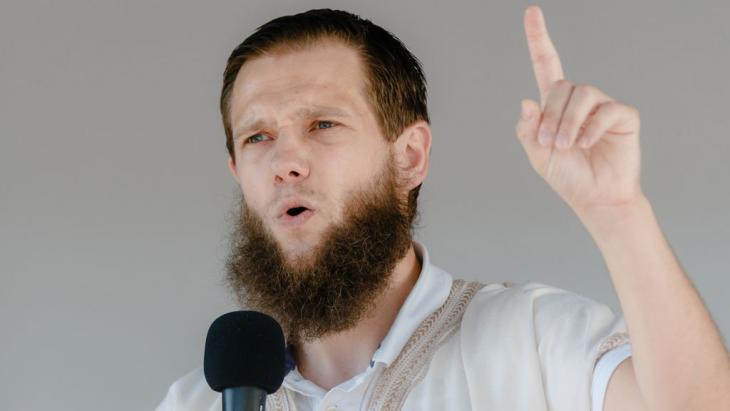 Sven Lau, also known as Abu Adam, came to prominence as the head of the "Sharia police" in the German city of Wuppertal, which caused outrage across Germany in September. Eleven young Salafists in orange vests with the words "Shariah Police" written on the back stopped young people outside Turkish discotheques, cafes and amusement arcades and called on them to refrain from drinking alcohol and playing games for money

"Salafist recruits are illiterate in terms of religion and theology"

A man in a black T-shirt joins him. He's obviously trying to cultivate a beard. "Did you see how that TV journalist asked what we think of Sharia? He chopped at his left wrist with his right hand. They have no idea at all, the media." He shakes his head. "They don't do it at the wrist, they do it here." He traces a line across his palm, above his fingers.

What drives young people in Germany into the arms of the Salafists? Can anything be done to prevent it? How can parents and teachers stop their children and students from becoming radicalised?

Claudia Dantschke is one of Germany's leading experts on extremism and has been studying Salafist movements for many years. Dantschke is an Arabist and runs the Hayat advice centre in Berlin, an institution for parents of children who have become involved in Islamism. The Federal Office for Migration and Refugees funds four such advice centres around Germany.

It's not easy to get an appointment with Claudia Dantschke at the moment. Her centre has a huge number of cases to deal with, 63 in Berlin alone, with twelve sets of parents fearing their child will leave for Syria. There are four or five new enquiries from concerned parents every week, most of them with good reason.

When we do manage to meet, Claudia Dantschke talks for two and a half hours. She talks quickly, interrupted only by an occasional drag on her cigarette. She talks about how the Internet is key in recruitment drives and how young people from all social classes are drawn to the Salafists. Not only those with low educational levels, those who fail at school, but also young people who do well academically; not only children of Muslim immigrants but also young people with a German background. Many are from bicultural families in which the father comes from a Muslim country and the mother from Germany.

They all have one thing in common: they haven't yet found their place in life, they're searching for their own identity and have unstable characters. Their parents are often too authoritarian or uninterested in their children's needs. And one thing in particular unites the Salafist recruits: "They're all illiterate in terms of religion and theology," even the converts, "Ramadan Muslims" and "Christmas Christians" as Dantschke calls them. Young people from conservative religious families rarely end up with the Salafists.

Strengthening families against extremism and violence 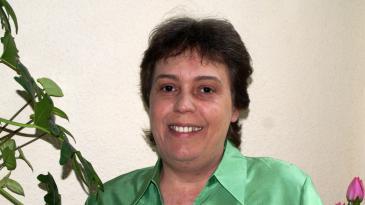 Arabist Claudia Dantschke has written extensively on the subject of Salafism in Germany. An expert on Islamism, she has expressed concern about the fact that Salafists in Germany are targeting young people in schools and youth clubs

The fundamentalists provide a simple view of the world, divided into good and evil, plus the guarantee of going to paradise if people live the way they tell them. Losers turn into winners. The young people feel like they belong somewhere at last.

To add to that, many who drift into these circles are teenagers. Their step towards Salafism is a good opportunity to provoke their parents and distance themselves from them. Religion itself is often not as important as other factors.

Claudia Dantschke tells the story of a girl from a town in the state of Hesse in western Germany. She is 14 years old and falls in love with a boy of Turkish origin. He's involved in the Salafist scene. She wants to belong, to be acknowledged, and she converts to Islam. Her parents try to forbid her from doing so. "That never works," says Claudia Dantschke. "The young people end up defending their friends; it's not about Islam itself at all."

The girl starts wearing a headscarf, then the hijab, a loose garment covering the whole body. She breaks off contact with friends who criticise her. Her home life is one big fight, but she feels understood in her boyfriend's group. She gets up at night to abide by the prayer times, she's tired out when she has to go to school and she spends barely any time at home, usually escaping her family in a mosque. The more her parents pressure her, the more the girl rejects their appeals. It's a vicious circle.

This is where Claudia Dantschke tries to help. She has long talks with the parents, explains that it's important for them to listen, to ask "Why are you doing this?" She tells them that forbidding the daughter to do something only achieves the opposite, that it's important to encourage their child to give his or her own answers, not the one-size-fits-all phases she has been fed by the Salafists. After two months of advice from Dantschke, the mother calls to say that she and her daughter are talking to each other again.

Claudia Dantschke says the best way to imagine a Salafist group is as a room with many windows to the outside. These windows are closed one by one, but the window to the family stays open the longest. "We try to train the families so that that window stays open for good."

Dalia Hatuqa is an experienced journalist who has reported on the Israeli-Palestinian conflict from Ramallah, Washington DC and Amman. A writer for Time Magazine, Foreign Affairs ... END_OF_DOCUMENT_TOKEN_TO_BE_REPLACED

Since President Abdul Fattah al-Sisi seized power in Egypt in 2013, he has ruled the country with an iron fist. Civil society, opposition and free press struggle to survive. Tens ... END_OF_DOCUMENT_TOKEN_TO_BE_REPLACED

Many Turks are dissatisfied with the international status of their country. At the same time, opinion polls reveal great scepticism among the Turkish population towards the USA. ... END_OF_DOCUMENT_TOKEN_TO_BE_REPLACED

The German government is planning to legalise cannabis before the end of this legislative period. So what does Islam have to say about its consumption? Will changing the law alter ... END_OF_DOCUMENT_TOKEN_TO_BE_REPLACED

In his latest book, Navid Kermani poses questions about God. It feels like no one could have done it better. His writing elicits smiles, doubt and wonder. By Melanie Christina Mohr END_OF_DOCUMENT_TOKEN_TO_BE_REPLACED
Author:
Arnfrid Schenk
Date:
Mail:
Send via mail

END_OF_DOCUMENT_TOKEN_TO_BE_REPLACED
Social media
and networks
Subscribe to our
newsletter