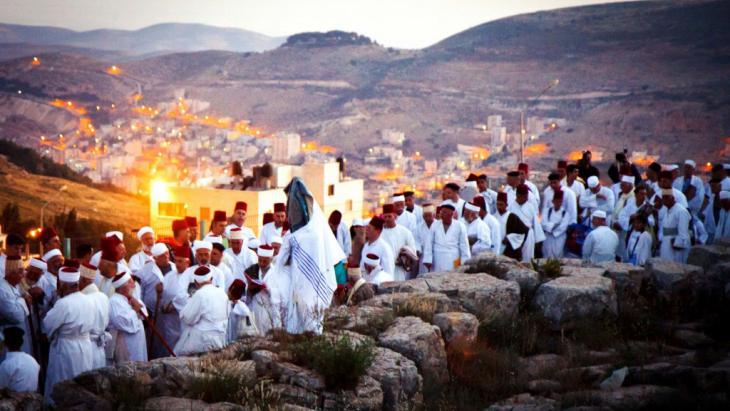 The other "People of Israel"

They hold dual citizenship and speak both Arabic and Hebrew fluently. The small Samaritan community in Nablus sees itself as the custodian of the "true religion of the Israelites". Its members support a two-state solution, yet deliberately distance themselves from the Middle East conflict. Laura Overmeyer paid them a visit

The road winds steeply up Mount Gerizim. Down below, nestled in the dusty and hilly terrain, lies Nablus – a Palestinian city, a political hot spot in the Israeli-Palestinian conflict, and for millennia, a centre of human culture. The Bible refers to this place as Shechem, the land of the patriarch Jacob and his 12 sons, from which are descended the people of Israel. Some of their descendants still live on Gerizim.

Hosni Cohen is one of 12 Samaritan priests and the director of the small museum in Kiryat Luza, the Samaritan village. Here, dressed in traditional white garments and a red hat, he receives his guests.

Guardians of the Israelite faith

The Samaritans consider themselves to be the last descendants of this Northern Kingdom. For more than 3,000 years, they have lived in the direct vicinity of Mount Gerizim, which they venerate as a Holy Mountain and a place of God.

"We do not refer to ourselves as Samaritans, but rather as 'Shomroni,' the 'Guardians.' This is because we preserve the original commandments of our master, Moses," explains Hosni Cohen. 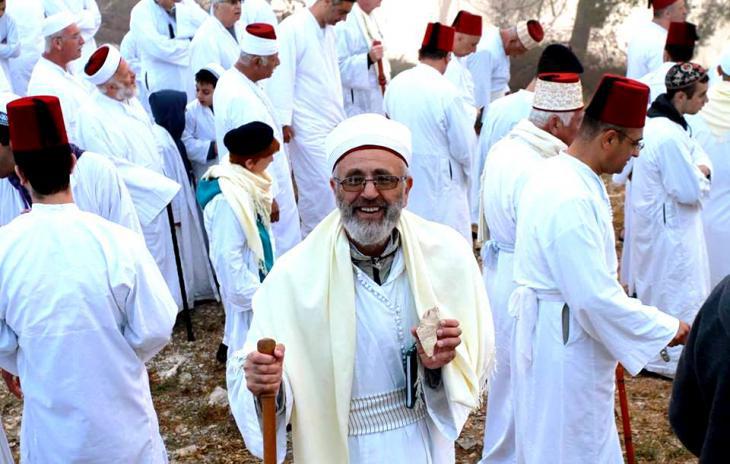 According to the Samaritans, the religion of the Israelites was altered by the Jews in exile. The Samaritan Torah consists exclusively of the five books of Moses and is written in Old Hebrew, a language that every member of the community learns from childhood. Although the religious community has several things in common with Judaism, such as observing the Shabbat and the practice of circumcision, the Samaritans prefer to stress the uniqueness and authenticity of their traditions, to which all members of the community are required to adhere.

The main reason for this lies in the constant concern about the survival of the community. Centuries of religious wars and forced conversions have practically decimated the community. In 1918, there were just 146 Samaritans. Today, the number is up to a little less than 800, in part due to the increase in marriages within the community to non-Samaritan women.

The dilemma of identity

Around half of all Samaritans live in Nablus, while the other half live in Holon near Tel Aviv, where a second community was formed in the 1970s as a result of better job prospects and a higher standard of living in Israel. The contact between the two communities is lively, with members travelling back and forth between the two cities – one could almost say between two worlds – buying their vegetables at the market in Nablus and travelling to Tel Aviv on their free days to relax on the beach.

The Samaritans in Nablus are not hindered by checkpoints or the security barrier, as they enjoy the unique privilege of holding both Israeli and Palestinian citizenship. Yasser Arafat paved the way for this initiative and remains a highly esteemed figure in Gerizim to this day.

Members of the Nablus community speak Arabic in their everyday lives and, in many respects, have adapted to their mainly Muslim Arab surroundings. By comparison, the Samaritans in Holon continue to move away from this aspect of their past, speak Hebrew, and maintain a lifestyle that is far less conservative than their brethren in Gerizim, where girls and boys are forbidden to go out with each other before marriage. 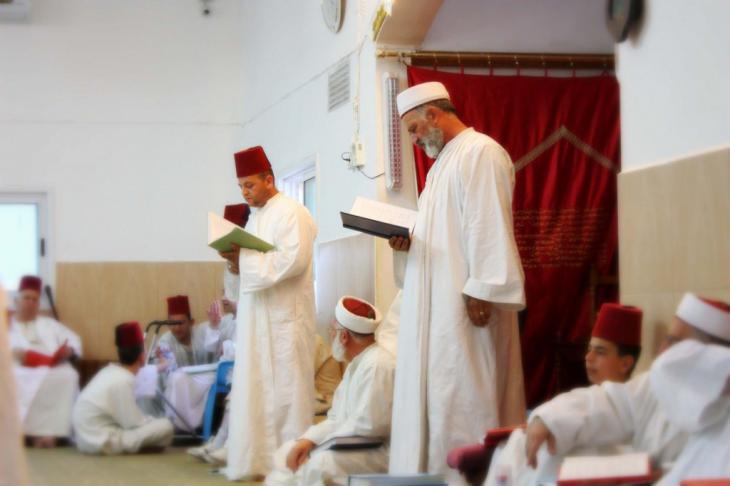 One of the most important commandments for Samaritans is the observance of the Shabbat: the men pray in the synagogue while the women pray at home. Interestingly, the position adopted by Samaritans at prayer is similar to that of the Muslims

The Samaritans find themselves stuck in a dilemma concerning their identity. They are literally positioned between both sides of a conflict that is not only political, but also cultural. They claim to purposefully refrain from engaging in political affairs in order not to aggravate either side. "We feel bound to the Jews, as our religions are quite similar. Yet, at the same time, we feel bound to the Palestinians, since we live and work with them and our children attend their schools," explains Yaqub, who lives in Nablus.

This approach, however, does not always prove successful in avoiding conflicts. "Many Jews take us for Arabs, since we live in Nablus and speak Arabic, and they treat us accordingly," says Yaqub. "For example, I am always searched from head to foot at Ben Gurion Airport – just like the Palestinians." Similarly, the Palestinians, on occasion, view the Samaritans with distrust and even hostility.

Kiryat Luza is a neutral meeting place for all parties in the conflict, and "Café Paradise", which is also a supermarket, is its focal point. Israeli soldiers stock up on cola and cigarettes; Palestinians frequent the store because it is the only place in conservative Nablus that sells alcohol. Israeli and foreign tourists can be seen sipping cappuccinos and are pleased whenever a red-capped Samaritan comes into the store and completes the colourful picture.

The Samaritans like to see themselves as mediators, as a bridge between the Palestinians and the Israelis. Although they officially support a two-state solution with Jerusalem as a shared capital, they do not actively work to attain this goal. They have adapted to the situation as it stands.

Wasef, who works in "Café Paradise", sums up the position: "The conflict between the Israelis and Palestinians is part of our life. We don't like it, but we have become accustomed to it. And it doesn't affect us directly; we Samaritans live just as securely in Israel as in Palestine, and that is how things should remain."

Home
Print
Newsletter
More on this topic
Interfaith dialogue in Palestine: Reviving a heritage of peaceful co-existenceIsraeli-Palestinian relations: Dialogue in a time of conflictWebsite: Samaritans Museum
Related Topics
Arab citizens of Israel, Jassir Arafat, Jews in the Islamic world, Minorities in the Muslim world
All Topics

As someone accustomed to presenting his country to interested outsiders, Israeli teacher and tour guide Noam Yatsiv makes the case for a more nuanced appreciation of the ... END_OF_DOCUMENT_TOKEN_TO_BE_REPLACED

Jewish voices are much more diverse than the public often sees. Jewish men and women who oppose the injustice of Israeli occupation in the West Bank deserve our respect and ... END_OF_DOCUMENT_TOKEN_TO_BE_REPLACED

The Germans have a fragmented perception of the conflict between Israel and the Palestinians, and their discourse is dominated by certain catchphrases. All the while, there is a ... END_OF_DOCUMENT_TOKEN_TO_BE_REPLACED

An unusual organisation brings Jews and Muslims together to fight hate and promote dialogue. In the small central German city of Marburg they have been jointly calling for an end ... END_OF_DOCUMENT_TOKEN_TO_BE_REPLACED

Professor Timothy Brennan's "Places of Mind: A Life of Edward Said" is a detailed biography of one of the most important intellectuals of the twentieth century, taking us on a ... END_OF_DOCUMENT_TOKEN_TO_BE_REPLACED

Yair Lapid, like his late father, is a journalist-turned-politician renowned for his staunchly secular positions. But as the centrist politician edges towards the Israeli ... END_OF_DOCUMENT_TOKEN_TO_BE_REPLACED

Comments for this article: The other "People of Israel"

I visited this community in 1978 with my husband's family who are Palestinians from Nablus. We were considered friends and Israel was considered the enemy. It was a wonderful visit and my parents in law said that they had always been friends as indeed the original Jews and Palestinians had always been until Europe stepped in with their evil plans.

There are more than 6000 differences between the Samaritan Pentateuch and the familiar Jewish Masoretic Text. Interesting !

END_OF_DOCUMENT_TOKEN_TO_BE_REPLACED
Social media
and networks
Subscribe to our
newsletter