The continuation of the German Islam Conference is worthwhile, says Loay Mudhoon. The public row over those attending and the new orientation of the second session of the conference must not be allowed to overshadow the meeting's success up to this point in advancing Muslim integration in Germany, he argues 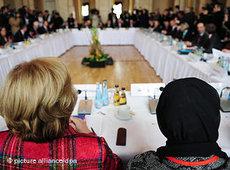 Islam is becoming a part of Germany: the process of open dialogue has already placed mutual perception and cooperation on a new footing, says Loay Mudhoon

​​ The circumstances in which German Interior Minister Thomas de Maizière officially opened the second session of the German Islam Conference last Monday (17 May 2010) could hardly have been worse. The exclusion of the Council of Islam and the withdrawal of the Central Council of Muslims has undoubtedly inflicted serious damage on the credibility of the Islam Conference.

This is because the absence of these two groups meant that the Islam Conference had failed to fulfil one of its primary goals, namely to discuss effective ways and means of "naturalising Islam" in Germany, on an equal footing with all representatives of the Muslim community in Germany.

More than a debating society

But criticism from the Chairman of the Central Council of Muslims in Germany, Ayyub Axel Köhler, aimed at the participants and the new orientation of the Islam Conference, is exaggerated and essentially incomprehensible.

The German Islam Conference is, also in its present form, not a "non-committal debating society" at all, but a long and difficult process of rapprochement and acknowledgement between Germany and its Muslims – a process that is open-ended, and that has already registered visible success. 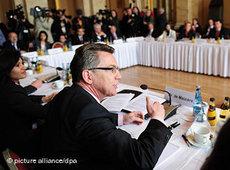 Interior Minister Thomas de Maizière explained that greater efforts would be made in future to integrate Muslims as citizens. Just being different should not give rise to problems, he said, and added that the conference aimed to address this point

​​ After all, thanks to the first session of the Islam Conference initiated by the former Interior Minister Wolfgang Schäuble, for the first time a forum was established for an institutionalised dialogue between representatives of the German state and the Muslim community. This process of open dialogue has already placed mutual perception and cooperation on a new footing.

German Muslims sense they are being recognised

For the first time in German post-war history, a German interior minister conceded that Islam has a place in Germany. While the prerequisites for a formal recognition of Muslims as a statutory body under public law are still lacking – the sense that Muslims have that they are being recognised in public life has increased tangibly, something that if nothing else was evident from the increasingly critical reactions to Islamophobic tendencies in the mass media.

In the end it is up to German Muslims themselves to find a broad consensus on a fitting representation, in order to successfully institutionalise the integration of Islam that politicians are striving for, instead of concentrating on phoney debates such as swimming lessons for girls. After all, the constitutional state relies on binding agreements with representatives of relevant social groups. 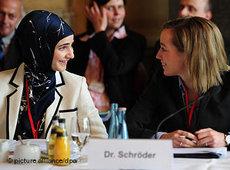 Tangible results: the second session of the Islam Conference has already agreed on a concept for Islamic religious education, which it hopes to develop further in the future

​​ Despite all its difficulties and partly justified criticism of its structure, the first Islam Conference was an enduring and even historic success for Wolfgang Schäuble – anchoring Islam in German public life really was an issue close to his heart. This makes it all the more important that the second phase of the conference now applies itself more vigorously to practical questions and concepts for problem solving.

The organisers of the Islam Conference have already taken this situation into account by making sure that on the governmental side, states and local authorities are better represented than they were during the first phase.

The most significant achievements in this process of integration are after all being made in the states, the cities and local communities, and this is why contacts such as supporters of social and religious institutions, above all Mosque congregations, are so important.

For this reason it would be advisable to bring a greater number of Muslims on board and take the courageous step of including all associations if possible, as part of a new formula for consensus. And that is why there is still no real alternative to the Islam Conference.

Germany's Islam Conference
State Islam Would Be Unconstitutional
The Muslims will have to organise if they want to ensure themselves of a place within the system of constitutional law on religion. In order to conduct negotiations on religious matters the neutral state requires someone to talk to. A commentary by canon lawyer Hans Michael Heinig

END_OF_DOCUMENT_TOKEN_TO_BE_REPLACED
Social media
and networks
Subscribe to our
newsletter