With his numerous readings out of Hitler's "Mein Kampf," Serdar Somuncu holds up a mirror to unmask the absurdities of right-wing logic. In his new program "Hitler Kebab, Separate Checks" the German-Turk delves into his own origins. By Petra Tabeling

With his numerous readings out of Hitler's "Mein Kampf," Serdar Somuncu holds up a mirror to unmask the absurdities of right-wing logic. In his new program "Hitler Kebab. Separate Checks" the German-Turk delves into his own origins – quietly, but not without painful moments. Petra Tabeling reports 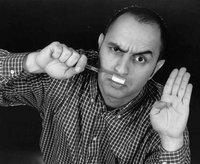 ​​In 1996, when Serdar Somuncu read Hitler's "Mein Kampf" aloud on stage for the first time, no one thought he would actually get away with it: a Turk in Germany, daring to read and critically pick apart Hitler's writings before a German audience.

Since then, Somuncu has given over 1,500 performances, along with radio and TV appearances, and has published audiobooks as well. The cabaret artist and actor has read Hitler up and down and all across the country and Europe, laying bare Hitler's demagogy and racial fanaticism – at times in front of audiences including former concentration camp prisoners, and even right-leaning youth. But not without sometimes first donning a bulletproof vest.

The irony of hollow right-wing slogans

Serdar Somuncu has made a name for himself with this awkward material. Here was finally someone who dared to break the taboo of the past, to present Hitler's empty words, and to do it with a special brand of acerbic wit. He was able to accomplish more this way than any demonstration against the Nazis ever could, says Somuncu when asked what motivates him.

The actor recounts his experiences during his long years of touring in his book "Nachlass eines Massenmörders. Auf Lesereise mit 'Mein Kampf'" ("Legacy of a Mass Murderer. A Literary Journey with 'Mein Kampf'."

The book, also available in audiobook form, can be recommended to anyone who has not yet had the pleasure of witnessing one of Somuncu's spectacular performances. Now Somuncu has for the time left this dark chapter of German history behind in order to turn his attention to his German-Turkish past and his search for identity.

Humorous, but not pain-free

Serdar Somuncu is a second-generation German-Turk. He studied acting, music and directing in Maastricht and Wuppertal. He has been director of the Chamber Ensemble in Neuss since 1987. At first, Somuncu wanted to write a children's book, but his text ended up becoming more of a biography.

Some more Mr. Nice-Guy? Somuncu, undeniably, is a man with many faces

​​In "Getrennte Rechnungen" ("Separate Checks"), the 37-year-old Jack-of-all-trades comes to terms with his childhood. Sometimes ironically, sometimes humorously, but above all with a touch of melancholy.

Somuncu, who was born in Istanbul, lovingly tells of how his parents came to Germany in the 1970s as guest workers. But even they are not spared his cabaret wit: "My father thought for a long time that 'asshole' was a normal German conjunction."

A Turkish childhood in Germany

Somuncu recounts the first party he threw when his parents were away ("The Coast is Clear for Delirium"), the first bicycle he bought himself, vacations spent with relatives in Turkey ("Who Owns the Sun?"), and why you can't visit your friends on Christmas ("Salamaleikum Mr. Santa Claus").

In "My Day," Somuncu describes from the perspective of a child why you should have your own class without Germans in grade school. These snapshots from his life brutally and at the same time sadly reflect why immigration back then, in the 1970s, was a foreign concept.

In the title story as well ("Separate Checks"), Somuncu not only looks at how Germans pay the check in a restaurant, but also how Germans and Turks in effect live in separate worlds, which doesn't go unnoticed by their children. Serdar the child is not welcome to sit at the same lunch table as his best German school friends.

German-Turkish readers – similarly torn between the two cultures – will readily identify with many of his stories: "They recognize a familiar sense of longing and melancholy," says Somuncu. And German readers are usually amazed to have finally found a work that gives them first-hand insights into the German-Turkish experience.

Serdar's current stage show, "Hitler Kebab," is based on his most recent book, "Separate Checks," but goes even further. He unites both sides of his German-Turkish soul in an explosive mixture of political cabaret and wistful self-reflection.

He provokes his listeners, not hesitating to take a stand on sensitive topics such as the headscarf ban, Bush or terrorism. And Hitler also comes up once again. Somuncu pokes fun at all nationalities equally – Germans, Turks, Americans – depending on where he happens to be performing, and even includes quips addressed to the locals.

Somuncu's rhetorical finesse whisks away the stale taste of issues surrounding integration and our multi-culti society and turns them into profoundly ironic jokes: "Damn foreigners, coming to Germany and stealing jobs from the Turks." Right on the mark.

First and foremost a human being

"Facing up to things is never easy," says Serdar Somuncu, when asked about the reactions of his audiences. As a child, he was not yet fully aware of his family's living conditions and the coldness with which he was treated, sometimes as a foreigner, sometimes as a Turk.

And it is this childishly naive perspective that Somuncu takes when telling the stories in "Separate Checks": "one I chose in order to keep the experiences as value-free as possible."

In his stage performances, he is much bolder and more polemic – with no holds barred: "I am not a Turkish actor or a Turkish cabaret artist; I am first and foremost a human being and I have my own opinion on everything." And he's not afraid to show it, with variations and improvisations, until the stage is rocking.

Publications by Somuncu (in German language):

END_OF_DOCUMENT_TOKEN_TO_BE_REPLACED
Social media
and networks
Subscribe to our
newsletter