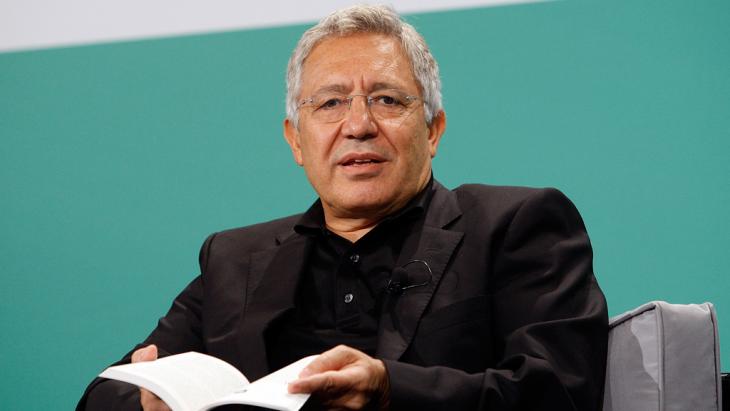 In his novel "Serenade", the composer, singer and author Zülfü Livaneli writes about Armenian, Jewish and Muslim identity, mirrored in 20th century Turkey's history and the crimes of the Second World War. A review by Astrid Kaminski

For many people in Turkey in the late twentieth/early twenty-first century, a career in the army and an Armenian grandmother would appear to be mutually exclusive. This view is shared by the brother of Maya, the protagonist and narrator in Zülfü Livaneli's novel, Serenade.

For this reason, Maya is not supposed to mention their grandmother in public. Not only that, but her brother – who couldn't be more different to her – is fond of telling her the most breath-taking Armenian conspiracy theories. The intention behind the dramatic composition is clear: the gulf between the siblings symbolises the gulf in Turkish society. On the one hand, we have the Nationalists, whether they be of Kemalist or Islamist orientation; on the other, a secular, liberal-minded middle class.

These well known camps have been thrown into stark relief by recent events. However, Livaneli is not happy to leave it at that. This novel is nothing less than Livaneli's Turkish Ring Parable, his fervent plea for tolerance.

While the heart of the novel's theme stretches back into the first half of the twentieth century, the plot that gives the story its shape is the Istanbul of the turn of the century, a city that is as modern as it is corrupt; where prominent figures avoid motorway congestion by speeding along the hard shoulder, members of the secret service are dispatched to clean up nationalism, and 14-year-olds lose control of their puberty on the Internet.

On this last point, however, Livaneli is a little confused. In 2001, the precise year in which the story is set, the middle class in Istanbul was much less digitalised than is the case in the book. On the other hand, the stories set around the time of the Second World War, the heart of the novel, are much closer to the historically documented reality.

The descriptions of the notorious Nazi spy Cicero, of the Turkish circle of Hitler's ambassador, Franz van Papen, or the Scurla reports (detailed reports about the activities of German academics who emigrated to Turkey), combine well-known and lesser-known historical facts that are both interesting and informative.

Maya's research takes her to the International Tracing Service in the German town of Bad Arolsen, an archive of Nazi crimes. The 36-year-old single mother and academic looks after foreign guests visiting Istanbul University. It is through her work that she meets the elderly Professor Maximilian Wagner, an American with German roots.

During the Second World War, Wagner, the hero of the novel, seeks refuge and employment in Turkey, like many real, famous Germans before him (such as for instance Ernst Reuter, who later became Mayor of Berlin).

However, following a chain of unfortunate circumstances, Wagner only manages to escape to Istanbul without his Jewish wife, Nadia. Livaneli's Professor Wagner does everything within his power to save his wife. The plan is that Nadia will be able to enter Turkey with the help of a false baptismal certificate, which was issued by Father Roncalli (a real, historical person who later became Pope John XXIII). However, she travels to Turkey on the Struma, a refugee ship that was sunk by a Russian torpedo in the Black Sea. Several states are responsible for the fate of this ship and the almost 800 Jewish exiles it was carrying.

Much later, at the end of his life – and this is where the two stories converge – Wagner returns to Turkey from the US to play on the shores of the Black Sea a serenade that he composed for Nadia. During his visit, Maya saves his life. Thrown into turmoil by the events, she also begins to reflect on her own family's history.

Both her grandmothers – one a Christian Armenian and the other a Muslim Crimean Tatar – experienced the most appalling human rights violations. Just as Nadia became Katharina on her baptismal certificate, Maya's grandmothers were also forced to change their names in order to survive in Turkish society.

As far as the story of the Struma and the Armenians is concerned, Livaneli is covering ground that has already been the subject of works by a growing number of authors. The history of Turkish-Armenian families, for example, has been openly discussed in Turkey as a result of a number of works, including Fethiye Cetin's memoir, My Grandmother (2004), or Elif Shafak's The Bastard of Istanbul (2008). Moreover, the story of the Struma was the theme of a novel by the Turkish-speaking, German author Doğan Akhanlı.

However, with the case of the Turkic Crimean Tatars, Livaneli has shone a light on a relatively little-known tragedy of the Second World War. Some Crimean Tatars who suffered discrimination fought as Nazi collaborators against the Red Army during the Second World War. At the end of the war, the entire ethnic group was subjected to horrific collective punishment with the indirect involvement of Turkey.

In short, all three Abrahamic religions have painful chapters in their twentieth-century Turkish history that have not yet been addressed. It seems as though the author's intention in this otherwise exciting novel is to teach us – at times in a very didactic manner – that working through the past is not a question of apportioning blame, but an act of humanity.

At one point during the reading in Berlin, attention turned to the Armenians. While summing up the translation of the conversation with Livaneli, the host Osman Okkan used the word "massacre" for the events that took place in 1915 – instead of "mass expulsions". There was uproar in the room, as there so often is in this context.

This time, it was obviously a group of women of Turkish origin who were furious that someone could use a term such as this to accuse Turkey of genocide. Obviously, more novels of this kind are needed before nationalisms are understood to be about historical responsibility and not a personality ersatz.

Nevertheless, Serenade for Nadia has been a success in Turkey. According to the author, it has been read "almost a million times, when you count the family members of the people who bought the book".

Zülfü Livaneli: "Serenade für Nadja" (Serenade for Nadia). German translation by Gerhard Meier. Published by Klett-Cotta (Stuttgart 2013), 336 pages, hardback, €21.95. The book has not yet been published in English.

Home
Print
Newsletter
More on this topic
Interview with Elif Shafak: "In Turkey, a Novel Is a Public Statement"Yusuf Atilgan's "The Loiterer": A Turkish OedipusPortrait Feridun Zaimoglu: From "Educated Kanakster" to Literary Star
Related Topics
Turkish literature
All Topics

Initial statements by the Biden administration indicate it will follow a carrot and stick policy towards Turkey. Ankara believes its role in negotiations on various issues could ... END_OF_DOCUMENT_TOKEN_TO_BE_REPLACED

Did the Saudi state plan the assassination of Jamal Khashoggi? Was Khashoggi so much of a threat to the Saudi regime that it was prepared to commit a terrible crime to get rid of ... END_OF_DOCUMENT_TOKEN_TO_BE_REPLACED

For years, singer Aynur Dogan has preserved and expanded the possibilities of traditional Kurdish music, lending a voice to her people. She has just released her seventh studio ... END_OF_DOCUMENT_TOKEN_TO_BE_REPLACED

Relations between Ankara and Paris have reached a new low, with presidential communications contributing to the escalation. To describe recent bilateral exchanges as undiplomatic ... END_OF_DOCUMENT_TOKEN_TO_BE_REPLACED

Just like the rest of the world, the Arab region and Arabic-language media have been watching spellbound over the last few days as U.S. President Donald Trump was voted out of ... END_OF_DOCUMENT_TOKEN_TO_BE_REPLACED
Author:
Astrid Kaminski
Date:
Mail:
Send via mail

END_OF_DOCUMENT_TOKEN_TO_BE_REPLACED
Social media
and networks
Subscribe to our
newsletter