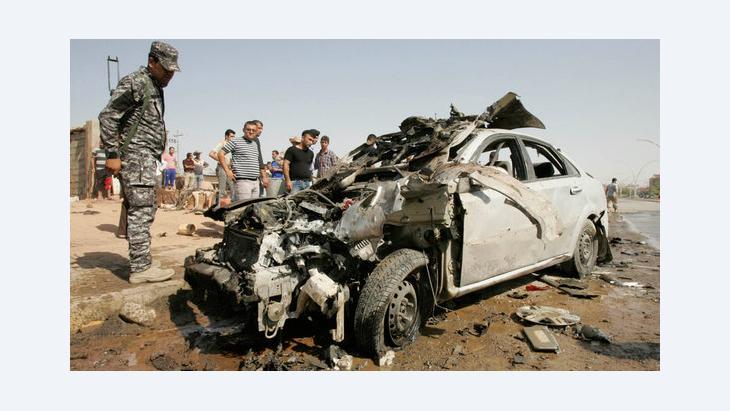 Series of Terrorist Attacks in Iraq
A Culture of Violence

﻿On the fourth day of the holy month of Ramadan, bombs went off simultaneously in 14 Iraqi cities, marking a new peak in al-Qaeda activity since the withdrawal of American troops at the end of last year. The terrorist network is shamelessly exploiting the way people behave during Ramadan, as Birgit Svensson reports from Baghdad

Two days before the inferno, the Interior Ministry announced the arrest of the head of al-Qaeda's Baghdad cell. Leading al-Qaeda members from the Sunni province of Anbar were killed in the preceding week. In April, authorities captured a high-ranking al-Qaeda member in Tikrit. The terror organization's cell in the province of Diyala has allegedly been completely eradicated. At the end of last year, US troops withdrew from Iraq, declaring that al-Qaeda had been decimated and no longer represented a threat. At most, five to ten thousand fighters were said to have been responsible for the terrorist activity in the country.

And then this: 22 bombs in 14 cities, detonated almost simultaneously. 24 July 2012 was the deadliest day Iraq has seen since May 2010. More than 100 people were killed, and twice as many injured. In the days that followed, bombs continued to go off across the country on a regular basis, as they had done in the preceding weeks. The body count in June was more like figures from two years ago, before the terrorist attacks gradually began to die down and Iraqis started to hope that they might at last be able to live normal, peaceful lives.

Statistics seemed to give credence to this hope. According to Iraq Body Count – an independent website that records civilian deaths – November 2011 was the most peaceful month since American and British troops invaded nine years ago. Since then, however, the body count has risen again. Is terrorism turning back the clock?

A few days later, al-Qaeda claimed responsibility for the attacks, confirming the suspicions of the security forces in Baghdad. The series of bombings bore all the hallmarks of the terror network. It had already carried out co-ordinated bombings in the past during the fasting month of Ramadan, with suicide attacks becoming more frequent during this period.

In Ramadan in 2005, for example, two trucks laden with explosives managed to get through unnoticed to the car park between the two biggest hotels on the banks of the Tigris in Baghdad, where they were detonated. The blast was so powerful that it shattered the windows of every house within a 200-metre radius. Almost 100 people died in the hotels themselves, and many more were wounded. The damage is still visible today. The lower storeys of the buildings were completely destroyed. The checkpoint at the entrance to the hotels was unmanned at the time because the security guards were eating iftar, the meal that marks the breaking of the fast. 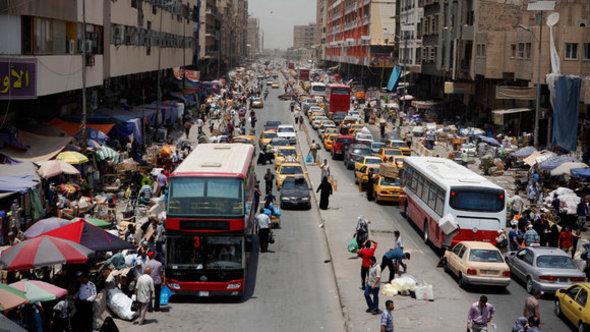 Attacks during Ramadan: the last few years have seen an increase in targeted, co-ordinated attacks during the month of fasting. Terrorists systematically exploit security weaknesses that tend to occur during this period

The following year, a suicide bomber got into the lobby of another hotel when an exhausted security guard fell asleep on the job. The bomber detonated his explosive vest, killing himself and almost 30 others. In Ramadan 2007, marketplaces in the Shia quarter Sadr City in the north-east of Baghdad were targeted. The bombings took place in the afternoon and were especially bloody, as most of the area's inhabitants go shopping for food for iftar at the same time of day. Terrorist groups are shamelessly exploiting the collective social behaviour of people who keep the fast. The network calling itself the "Islamic State of Iraq", which is one of a number of groups that belong to al-Qaeda, claimed responsibility for the majority of these attacks. Iraqi security circles therefore assumed from the start that this year's Ramadan bombings were also the work of al-Qaeda.

But who is really behind them? Most importantly, who is providing the money for these kind of attacks? People in intelligence circles are saying that the terror network "The Islamic State of Iraq" is itself in serious financial difficulties. They say that a growing number of recent attacks have in fact been contract killings. Yonadam Kanna, one of the few Christian members of the Iraqi parliament, agrees, claiming that "the terrorism in Iraq is politically motivated".

Since the withdrawal of American troops at the end of last year, Iraq has been in a state of ongoing governmental crisis. For months now, the opposition has been trying unsuccessfully to push through a vote of no confidence in Prime Minister Nouri al-Maliki and to have him replaced. They accuse him of concentrating too much power in his own hands, in particular of trying to withhold power from Sunni Muslims.

Maliki's State of Law coalition party is the second-largest bloc in parliament. The bloc led by his rival Iyad Allawi has one more seat, but Allawi was unable to build a majority coalition to form a government. In the coalition agreement Maliki made two years ago with Shia and Kurdish parties for a "government of national unity", key portfolios such as the Interior and Defence Ministries were reserved for Allawi, who actually won the election and was also supposed to head up a new security and regulatory authority. 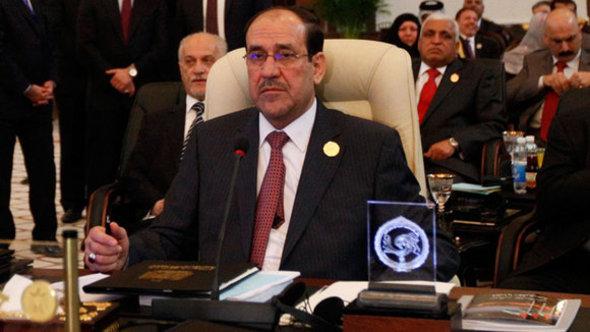 Open political crisis: for months now, politicians from different parties have been demanding the resignation of Prime Minister Nouri al-Maliki, accusing him of having an authoritarian style of leadership

Nothing of the kind has actually happened. Nouri al-Maliki is provisionally in charge of the key ministries, and there has been no further talk of a security authority. Allawi, like Maliki, is a Shia, but he has the majority of the Sunni parties behind him. The struggle between the two men has been dragging on for months now, paralyzing every effort to move the country forward. No development is taking place, except in the oil sector. Politically and economically, Iraq is in a catastrophic state of stagnation.

A history of violence

In Egypt, the people took to the streets in peaceful mass demonstrations to express their frustration with their leaders. In Iraq, bombs are being detonated. Iraq has a tradition of violent opposition. Fareed Jazim Hamoud, head of the Law School at the University of Kirkuk, speaks of "a culture of violence" prevailing in the country. He recently published a book on the subject, in which he examined different forms of violence in Iraq. The chapters on violence perpetrated by politics and religious fanaticism are central to his thesis, which is supported by a study commissioned by the US administration before it withdrew its troops. This found that 75 per cent of Iraqis surveyed believed that terrorism in their country is fuelled by religious fanatics and abused by politicians.

A study of the history of Iraq throws up countless examples of the use of violence in conflict situations. The tyranny of Saddam Hussein, who ordered the brutal massacre of his own people when the Kurds and Shias rebelled against him, has left deep scars, as has the bloody civil war in the mid-1990s between the Barzani and Talabani clans in the Kurdish north of the country.

Iraqi insurgents also fought vicious battles in the course of their violent resistance to the British and Ottoman occupations. A Western diplomat offers the following analysis of the difference between the Iraqi and Egyptian mentalities. "The Egyptians embraced their occupiers," he says, citing Napoleon, who founded the discipline of Egyptology, or Muhammad Ali, the Ottoman governor who is still revered by the people of the Nile. "The Iraqis, however, have always fought against occupying forces."

Home
Print
Newsletter
More on this topic
Iraq after the Withdrawal of US Troops: A ''Stable'' Country Teetering on the BrinkParliamentary Elections in Iraq: A Neck-and-Neck Race for Political PowerInterview with Nuri al-Maliki: "The Time Has Come to Invest in Iraq"
Related Topics
Democracy and civil society, Islam and democracy, Islamism | Political Islam, Nouri al-Maliki, Shia Islam | Shiite Muslims, U.S. policy in the Middle East
All Topics

When is it and when is it not acceptable to display a political banner at the World Cup in Qatar? The answer seems to depend largely on the political message, with fans ... END_OF_DOCUMENT_TOKEN_TO_BE_REPLACED

The Kurds are under attack from two sides: from Turkey, and from Iran. The situation in their territories in northern Iraq is becoming increasingly desperate. Birgit Svensson ... END_OF_DOCUMENT_TOKEN_TO_BE_REPLACED

Iranians do not want an Islam that interferes. They are fed up with a system that manipulates people with simple promises of salvation and anti-Western propaganda. Islamic ... END_OF_DOCUMENT_TOKEN_TO_BE_REPLACED

"The Voice of Dust and Ash" draws us into the life and times of Iranian maestro Mohammad Reza Shajarian with passion and joy, focusing on the man who stood, and still stands, for ... END_OF_DOCUMENT_TOKEN_TO_BE_REPLACED

November 2022 sees the Arab world firmly in the spotlight with the COP27 in Egypt and the FIFA World Cup in Qatar. Public trust in MENA governments is weak, thanks to their ... END_OF_DOCUMENT_TOKEN_TO_BE_REPLACED

In Iran, two famous actresses, Hengameh Ghaziani and Katayoun Riahi, were arrested recently. These days anyone who shows solidarity with the protesters is a target to be silenced ... END_OF_DOCUMENT_TOKEN_TO_BE_REPLACED
Author:
Birgit Svensson
Date:
Mail:
Send via mail

END_OF_DOCUMENT_TOKEN_TO_BE_REPLACED
Social media
and networks
Subscribe to our
newsletter