Sex education – taboo in the Middle East. Or is it? Thanks to social media, millions these days are daring to ask everything about "it". Jennifer Holleis has the details

One doesn't have to be a psychologist to see that this could be more conducive to disaster than to romance and intimacy. For this reason, one of Emam's online courses is aimed at women who are about to get married. "We kind of walk them through the bodies and genitals and encourage them to talk to their partners before they tie the knot," Emam explained. She believes it is crucial to address the expectations of both partners.

"We've heard a lot of stories of men shaming women on the wedding night for the way they look," says Emam, explaining that "pink vulvas have become some sort of ideal. But I tell the women, how can you expect to be, like, brown-skinned, but under your belly button, it's pink?" 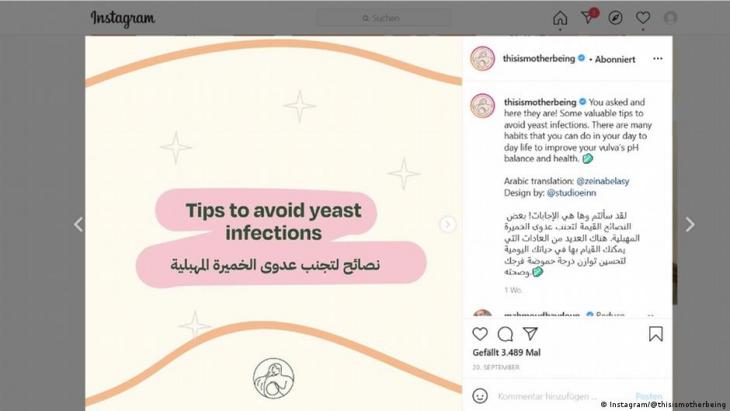 Lack of sex education across the Arab world: just one of the reasons Nour Emam's English-language Instagram channel is extremely successful

It would seem that Emam's courses and online answers have struck a chord: in her closed online courses, she has taught around 2,000 women about menstrual health, vaginism or sexually transmitted diseases, and her social media channels have garnered some 1.4 million followers within a year: on Facebook with around 18,000 followers, Instagram with 308,000 followers and TikTok  with 1.1 million followers.

Public sex education has up to now been extremely limited in the majority of Middle Eastern countries. In Egypt, health professionals and population specialists have opposed comprehensive education about sexuality since the 1990s. They argue that anything containing the word "sexual" should be described in more culturally acceptable terms, like "reproductive health" or "human development". In addition, many Egyptian families believe to this day that sex education is synonymous with promiscuity and that by providing information to children, educators are teaching them how to indulge in sex before marriage.

One particularly negative aspect of this high level of sexual illiteracy is that sexually transmitted diseases and HIV/AIDS are still taboo subjects, despite rising numbers of these illnesses. "Egypt's response to the symptoms of a sexually uneducated community has failed miserably," says Habiba Abdelaal, fellow of the Tahrir Institute for Middle East Policy and an expert on sexual and gender-based violence in Egypt

Egypt's Nour Emam is not the only one campaigning for sexual literacy in the Arab world. Another popular  Instagram page is "Niswa" (Arabic for "women"), which was founded by Zainab Alradhi from Saudi Arabia. It has around 60,000 followers.

Fighting "sexual illiteracy" in the Middle East: more profound public initiatives are needed now to help sex education take off in the Middle East, says Habiba Abdelaal of the Washington, DC-based Tahrir Institute for Middle East Policy, an expert on sexual and gender-based violence in Egypt

A pan-Arab women initiative is "Mauj" (Arabic for "waves"), which is run by women from Lebanon, Saudi Arabia and Egypt. This site by and for Arab women with around 65,000 followers focuses on sexual and reproductive wellness. Another site with Arabic-language content on sexual health and well-being is Love Matters Arabic, which has a following of around 80,000.

Deemah Salem, a gynaecologist in Dubai, is also working to educate Arab women about sex. "I've made it a mission to debunk myths about women's health because some can lead to harmful practices," she told the online news outlet Arab News. Her Instagram channel has almost 18,000 followers.

The first Arab country to do so, Tunisia launched a pilot programme on sex education in late 2019. In collaboration with the UN Population Fund and the Arab Institute for Human Rights, public schools there have since included sex education in their curriculums. "Establishing sex education programs does not require reinventing the wheel," Abdelaal admits.

However, although she sees and appreciates that there are many successful small-scale private initiatives addressing sexual literacy, she believes a more profound, public approach is needed: "Schools need supportive policies, appropriate content, trained staff and engaged parents and communities to tackle sexual illiteracy." And one more thing is paramount, according to Abdelaal: enlightened parents and enlightened communities – so that "sexual illiteracy" can become a thing of the past.

Interview with Joumana Haddad: "Eroticism is the pulse of life"

Home
Print
Newsletter
More on this topic
Islam and eroticism: Let′s talk about sex, AliMona Eltahawy: "Why do you hate us so?": The Middle East needs a sexual revolutionShereen El Feki's ''Sex and the citadel'': Exploring a sexual minefieldThe Book of Exposition: An archaeology of erotica
Related Topics
Arab world, Education, Gender, Media in the Arab World, Muslim women, New media in the Muslim world, Sexuality and eroticism in Islam, Women in the Islamic world
All Topics

In Doha, Arabs from Morocco, Tunisia, Egypt and Algeria are gathering to celebrate the first ever FIFA World Cup to be held on Arab soil. The criticism from Europe? Over the top, ... END_OF_DOCUMENT_TOKEN_TO_BE_REPLACED

November 2022 sees the Arab world firmly in the spotlight with the COP27 in Egypt and the FIFA World Cup in Qatar. Public trust in MENA governments is weak, thanks to their ... END_OF_DOCUMENT_TOKEN_TO_BE_REPLACED

Palme d’Or winner "Boy from Heaven" is a classic crossover film in which cultural elements are mixed together in haphazard and random fashion. Shady Lewis Botros bemoans the ... END_OF_DOCUMENT_TOKEN_TO_BE_REPLACED

COP27 in Sharm el-Sheikh is turning into a PR disaster for Egypt’s military regime. Instead of praise for the host, the news is full of solidarity for imprisoned activist Alaa ... END_OF_DOCUMENT_TOKEN_TO_BE_REPLACED

END_OF_DOCUMENT_TOKEN_TO_BE_REPLACED
Social media
and networks
Subscribe to our
newsletter