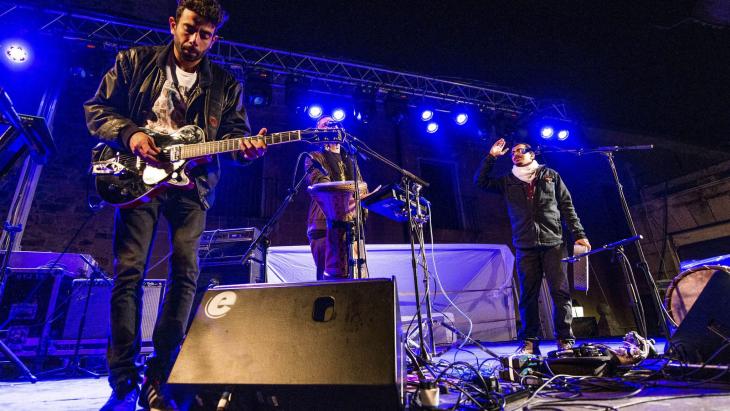 While Palestinian political concerns are largely ignored these days, Palestinian band of the moment 47Soul is taking the Middle East's music scene by storm. By Daniel Bax

In political terms, the Palestinians scarcely seem to have a voice. While Israel continues expanding its settlements in the West Bank, thereby depriving Palestinians in the region of any remaining hope of a state of their own, protests against this policy go largely unnoticed.

Instead, the world has tacitly accepted the ongoing annexation, as Israel normalises official ties with the Arab Gulf monarchies of the United Arab Emirates and Bahrain. These latest developments reveal just how isolated the Palestinians have become. They have hardly any allies.

However, things are quite different when it comes to music. In record quick time, Palestinian band 47Soul has risen to become one of the top groups in the Middle East – and it has a worldwide fan base. The musicians from 47Soul come from Israel, Jordan and the USA, having initially met on social networks. They met face-to-face for the first time in the Jordanian capital Amman. Today they have come together in London to record their tracks.

Rapper Tareq Abu Kwaik (El Far3i), bassist Walaa Sbeit, and keyboardist Ramzi (Z The People) grew up in Haifa, Ramallah, and Washington. They come from families belonging to the so-called Palestinians of 1947 – this is the name those Palestinians who were displaced after the founding of the Israeli state and the division of the former British Mandate give themselves. It also forms the basis for the band’s name. Until 1947, it was possible to travel without interruption from Jerusalem to Baghdad or to take a train from Haifa to Beirut.

Today’s seemingly insurmountable borders in the region are a legacy of the colonial era and the UN partition plan of 1947. By contrast, the musicians of 47Soul dream of a world without borders. In terms of their music, they come quite close to this vision.

Together, the members of 47Soul have created a new genre – a style they call shamstep. The name is an amalgamation of dubstep, the latest trend in British club music, and sham, the Arabic designation for the Middle East.

Musically, shamstep is an irresistible mix of dabke, the traditional folk dance of the Levant in which the dancers hold hands or grasp each other’s shoulders, together with Arab keyboard melodies and booming club beats. Its appeal makes it impossible to keep your feet still; what's more, it will also get your head spinning.

With hundreds of concerts and visually impressive video clips, 47Soul have captured a worldwide audience in recent years. The video of their debut single Intro to Shamstep, which first appeared over five years ago, has since been viewed over 13 million times on YouTube. Last year alone, 47Soul toured North America four times before coronavirus forced them to take a break.

The politics of 47Soul are not superficial. They refrain, however, from using bold and unequivocal slogans, stale propaganda or even militant stances, relying instead on original wordplay and metaphor. This was epitomised two years ago in the title of their debut album, Balfron Promise.

The name evokes the 1917 Balfour Declaration, in which Great Britain committed itself to establishing a Jewish state in the region. Yet, it also plays with the name of a prominent high-rise complex in East London, the Balfron Tower, where the album was recorded. The artist ateliers in the building have since been transformed into condominium apartments, displacing the local cultural scene. In this way, 47Soul reflects the larger world in the intimate.

Their songs are characterised by strong metaphors and simple, yet subtle messages. The song Moved Around is about people who are moved, whether by the music on the dance floor or, involuntarily, because they have been displaced. The interpretation is left up to the listener. The furious Mo Light deals with freedom, equal rights and the yearning for more light in bleak times. Everyland, featuring a reggae beat, has lyrics that stress “Every country is a holy land.”

Semitics, the second album by 47Soul, was also recorded in London and has been recently released. The title points to the fact that Arabic is a Semitic language. Yet, it also alludes to how critics of Israeli policies are often accused of anti-Semitism. There is no comparable word, however, for the hatred faced by Palestinians.

The artificial word Semitics underlines that Jews and Arabs in the region are connected by a common linguistic family and share many other similarities. On this basis, 47Soul invites listeners to participate in a dance capable of uniting peoples.

The band shrank in size after its guitarist, Hamza Arnaout, stressed out by touring, threw in the towel at the start of the year. They are now a trio. The remaining three members have nonetheless enjoyed the support of a whole array of guest performers. The hypnotic Hold your ground features the British-Iraqi rapper Lowkey from London. In Run, they combine forces with The Synaptik from Jordan and hip hop pioneer Tamer Nafar from Israel.

On Border Ctrl, the British-Palestinian rapper Shadia Mansour and her German-Chilean colleague MC Fedzilla articulate in Arabic and Spanish, respectively, their desire for a world without walls, whether in Mexico or in the Middle East. The music video was filmed on the Mexican border to the USA and on the Palestinian side of the Israeli 'separation barrier'. "Border controls clog our souls" goes the refrain.

In Dabke System, they confidently make the demand to “Turn up the sound of the Galilee loud”. In the accompanying video, the traditional folk dance of the Levant is combined with urban breakdance just as naturally as the young dancers wear kufiyas with their hoodies. It is a powerful image of self-assertion and renewal.

German Middle East analyst Guido Steinberg and television journalist Ulrich Tilgner have both published new books on the conflicts in the Middle East. Their analyses and their ... END_OF_DOCUMENT_TOKEN_TO_BE_REPLACED

In his latest documentary, "The First 54 Years", Israeli director Avi Mograbi demonstrates how catastrophic and traumatising the occupation has been, not only for Palestinians, ... END_OF_DOCUMENT_TOKEN_TO_BE_REPLACED

"The Memory Monster" was a success for Israeli author Yishai Sarid. His latest book hasn't been published in English yet, but given his reach among Anglophone readers, it won't be ... END_OF_DOCUMENT_TOKEN_TO_BE_REPLACED

FIT TLV is the latest initiative by Tel Aviv’s youth to keep on partying during the coronavirus crisis. FIT describe themselves as "Free. Individuals. Together" – cycling, ... END_OF_DOCUMENT_TOKEN_TO_BE_REPLACED

In 2012, fed up with people expressing clear-cut opinions on the rights and wrongs of the Middle East conflict, Canadian conflict researcher and long-time Israeli resident Corey ... END_OF_DOCUMENT_TOKEN_TO_BE_REPLACED

The Islamic Republic of Iran has been subject to sanctions ever since its creation in 1979. The more the regime has entrenched itself and expanded its power in the region, the ... END_OF_DOCUMENT_TOKEN_TO_BE_REPLACED
Author:
Daniel Bax
Date:
Mail:
Send via mail

END_OF_DOCUMENT_TOKEN_TO_BE_REPLACED
Social media
and networks
Subscribe to our
newsletter