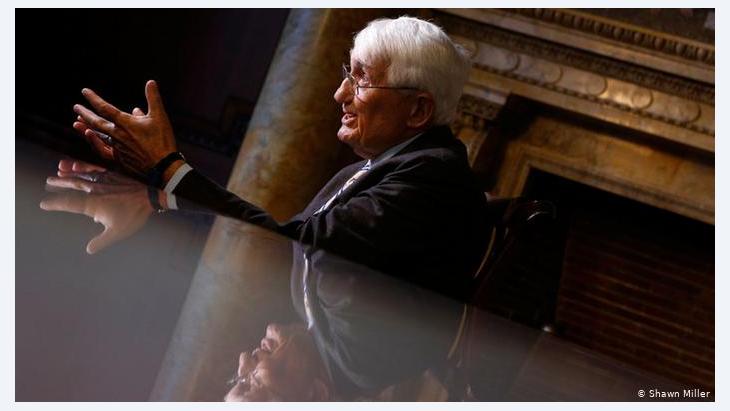 Sheikh Zayed Book Award
Why has Juergen Habermas rejected a prize from the UAE?

At nearly 92, Juergen Habermas is still advocating for a robust and transparent civil society. Now Germany's greatest living intellectual has rejected a book award from the United Arab Emirates. Stuart Braun has the details

The celebrated German philosopher Juergen Habermas will turn 92 next month, yet he remains firmly in the public eye after accepting, then rejecting, a controversial award from the United Arab Emirates (UAE) this past week.

Having decided to accept the Sheikh Zayed Book Award – which would have made him Cultural Personality of the Year 2021 and €225,000 ($271,000) richer – Habermas turned it down on Sunday over concerns about human rights in the Gulf nation.

In the end, Habermas could not compromise his core philosophical principles established over more than seven decades.

Having advocated for the right to asylum during the 2015 migrant crisis, and against right-wing populism and xenophobia in the 2019 European Parliament elections, Habermas remains actively committed to his cosmopolitan ideal of an open and rigorous democracy.

After turning 90 in 2019, he also published a 1,700-page work, This Too a History of Philosophy, a look at the evolution of human rationality and reason that the Boston Review called "a masterpiece of erudition and synthesis."

His acceptance of an award from an absolute monarchy accused of repression has, however, been seen to contradict his avowed principles of freedom of opinion and open debate in a healthy "public sphere". 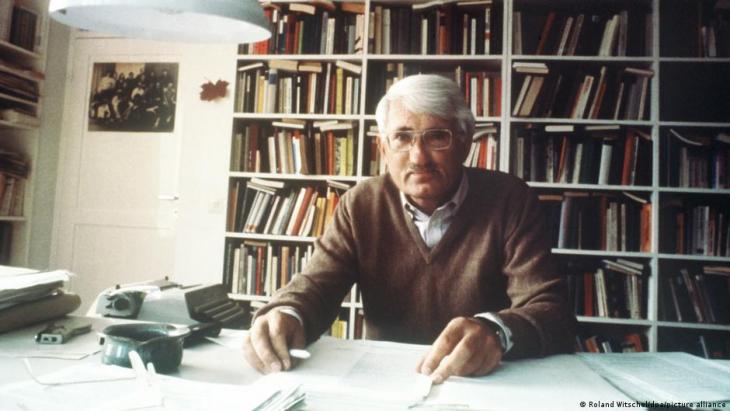 Having lived through the Nazi regime, Habermas was inspired to embolden democracy in Europe and the world through his writings. The question of how a repetition of how the Holocaust could be prevented was fundamental to his work. He was ultimately inspired to create complex communication models through which members of a society could aim to balance their different interests

In a statement to the Spiegel Online news website, Habermas admitted that his initial embrace of the Sheikh Zayed Book Award "was a wrong decision," adding that "I didn't sufficiently make clear to myself the very close connection of the institution, which awards these prizes in Abu Dhabi, with the existing political system there."

The creation of a public sphere

Born in Dusseldorf in 1929, Juergen Habermas is most closely associated with the city of Frankfurt – more specifically, with a school of social and critical theory known as the Frankfurt School.

After earning a doctorate in philosophy in Bonn, in 1964 he took over the chair of philosophy and sociology at the University of Frankfurt from Max Horkheimer, a position he held until 1971. His postdoctoral thesis from 1961, Strukturwandel der Öffentlichkeit (published in English translation in 1989 as The Structural Transformation of the Public Sphere), establishes his concept of the "public sphere" as the domain through which reasoned "public opinion" can be employed to tame the excesses of capitalism.

His updating of Marxist theory for the times influenced the 1968 student protests; however, when the protest movement became more radical, the philosopher openly criticised it.

In his chief work from 1981, Theory of Communicative Action, he developed a theoretical action guide for modern society, which again looked at how language and rational argumentation can evolve so that every participant is free to take part in democratic discourse. 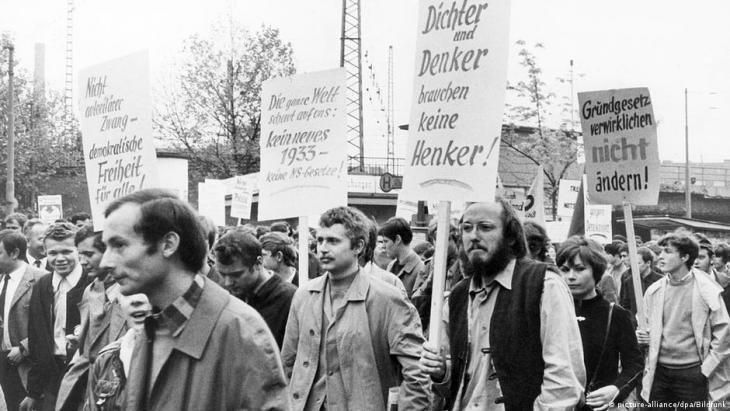 "Consensual" was the term given to Habermas' social models, and the term had an exceptional impact on the self-image of the Federal Republic of Germany. Citizens were no longer to receive orders from above; rather, they should be encouraged to intervene in public, to formulate their views openly and include them into a large-scale discussion, one in which everyone would be working toward an acceptable compromise.

But such democratic discourse is routinely shut down in the country that awarded Habermas his prize, according to Kenneth Roth, executive director at Human Rights Watch. Though the UAE is trying to present itself as "a bastion of liberalism, behind the glistening facade is an uglier reality where critics are jailed, the rights of migrant workers are limited, and the ruler of Dubai locks up his adult daughter for wanting to escape life under his thumb."

Latifa, a daughter of the prime minister of the United Arab Emirates and ruler of the Emirate of Dubai, Sheikh Mohammed bin Zayed Al Nahyan, says she is being held against her will since attempting to leave the country in 2018. Meanwhile, her sister, Shamsa, has not been seen since 2000 when she was allegedly abducted from Cambridge, England.

A #FreeLatifa campaign gained momentum when video footage of the despairing princess was aired on BBC in February.

This followed a ruling by a UK judge in March 2020, which said the billionaire ruler of Dubai ordered the abduction of his daughters and subjected his estranged wife to a campaign of fear and intimidation.

The day before Habermas declined the UAE award, the #FreeLatifa campaign also fuelled calls to ban Sheikh Mohammed's horse from the Kentucky Derby.

Habermas' decision to rescind the award comes as the UAE's authoritarian government attempts to contrast human rights concerns in the Gulf nation with a more liberal and tolerant outlook, especially concerning women. Dubai is well-known for its celebrity "influencers" who receive tax-free income to promote the UAE's sun-soaked Persian Gulf city. As the oil-rich UAE has also become a generous patron of arts and culture in recent times, the Sheikh Zayed Book Award itself is typically pitched as embodying "the values of tolerance, knowledge and creativity while building bridges between cultures."

To put it mildly UAE does not live up to the ideals articulated by Habermas with regard to democracy, law, a free public sphere and open debate. It is an autocracy which systematically abuses human rights.

When Habermas initially accepted the award, Spiegel Online questioned why the greatest German thinker of the last 50 years hadn't simply turned it down.

"With this world-class thinker who has stood for the Enlightenment project and critical distance from power for more than half a century, it should be possible to answer the question [of whether to accept the award] with a resounding 'no'," wrote Spiegel Online on Sunday.

Habermas had first said he hoped the award would provide a "tailwind" for the "dissemination of books" in the region that, like his, similarly promote freedom of opinion and democracy. He also stated that he had sought advice from Jurgen Boos, the managing director of the Frankfurt Book Fair who also sits on the committee that adjudicates the Sheikh Zayed Book Award. He added that Boos had "dispelled concerns that are obvious."

Boos said in a statement that he was disappointed that Habermas had declined the award.

"Of course, I accept Mr. Habermas' decision," he said. "However, awarding him this prize would have been an occasion to make his important work and his positions even better known in the Arab cultural area and thus to promote Arab society's engagement with his work. A significant number of the German philosopher and sociologist's works have been translated into Arabic."

Once Habermas rescinded the award, some on social media said the philosopher had upheld the spirit of the "public sphere."

"It is good to see Jurgen Habermas, whose scholarship defines the concept of the public sphere, has rejected an award from the UAE on #WorldPressFreedomDay," wrote "independent activist" @LyndonPeters01 on Twitter. "With no press freedom in the UAE there is no public sphere. So we should reiterate the calls to #FreeAhmedMansoor," he added, referring to the human rights activist who has been jailed for criticising the UAE government.

Having lived through the Nazi regime, Habermas was inspired to embolden democracy in Europe and the world through his writings.

The question of how a repetition of how the Holocaust could be prevented was fundamental to his work. He was ultimately inspired to create complex communication models through which members of a society could aim to balance their different interests.

"Consensual" was the name given to those social models, and the term had an exceptional impact on the self-image of the Federal Republic of Germany. Citizens were no longer to receive orders from above; rather, they should be encouraged to intervene in public, to formulate their views openly and include them into a large-scale discussion, one in which everyone would be working toward an acceptable compromise.

Political activism in the Gulf: The UAEʹs policy of zero tolerance

UAE foreign policy and the Crown Prince of Abu Dhabi: Hardly a ruler in waiting

Iranian author Fariba Vafi is adept at describing everyday scenes and concealing within them something ambiguous, in parts strange and grotesque. She writes novels – which have ... END_OF_DOCUMENT_TOKEN_TO_BE_REPLACED

Her grandparents are Jews – born in Tunisia and Algeria. Director Cleo Cohen has now broken the silence about this with a very personal debut. By Nadine Wojcik END_OF_DOCUMENT_TOKEN_TO_BE_REPLACED

Life imprisonment for crimes against humanity: that was the sentence handed down to Anwar Raslan in the world's first trial of a member of the Syrian torture system. Matthias von ... END_OF_DOCUMENT_TOKEN_TO_BE_REPLACED

Every year in December, the team at Qantara.de takes a look back at the articles that proved most popular with our readers. This year is no different. Here is a run-down of the ... END_OF_DOCUMENT_TOKEN_TO_BE_REPLACED

With his new album, "A Voice Keeps Calling Me", the Persian santur player Kioomars Musayyebi is building bridges from Iran across the Arab world to European early music. By Stefan ... END_OF_DOCUMENT_TOKEN_TO_BE_REPLACED

Former lawyer Said Haider has invented a chatbot for those seeking advice on anti-discrimination issues – Meta is the first chatbot of its kind in the world. In conversation with ... END_OF_DOCUMENT_TOKEN_TO_BE_REPLACED
Author:
Annabelle Steffes-Halmer
Date:
Mail:
Send via mail

END_OF_DOCUMENT_TOKEN_TO_BE_REPLACED
Social media
and networks
Subscribe to our
newsletter