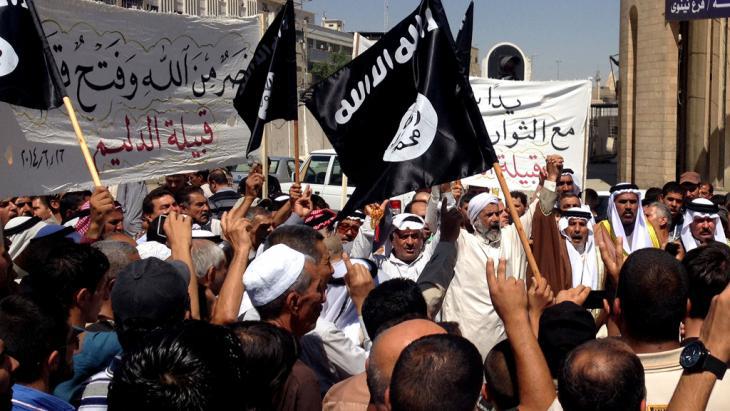 Shifting alliances in the Middle East

My enemy's enemy is my friend

The successes of IS militias are turning the West's established concept of friend and foe on its head. Former rogue nations are emerging as strategic partners, and declared terrorists are becoming allies. By Karim El-Gawhary

Could Iranian Revolutionary Guards soon be fighting against Islamic State jihadists in Iraq with US air support? As improbable as this scenario might have seemed only recently, it is now no longer unlikely. Citing Kurdish security sources, the Arab television broadcaster Al Jazeera reported that Iranian units crossed the Iraqi border for the first time and for a brief period on 22 August 2014 and fought alongside the Kurdish Peshmerga against Islamic State jihadists. The Iranians and the Kurds were evidently attempting to recapture the town of Jalula, located just 25 kilometres from the Iranian border, which the Iraqi army abandoned to the jihadists without a fight several weeks ago.

A decade of US foreign policy in the region and the neo-conservative fairy tale of a "new Middle East" can herewith officially be declared a failure. It has been impossible both to create a stable Iraq and to politically isolate the leadership in Tehran. 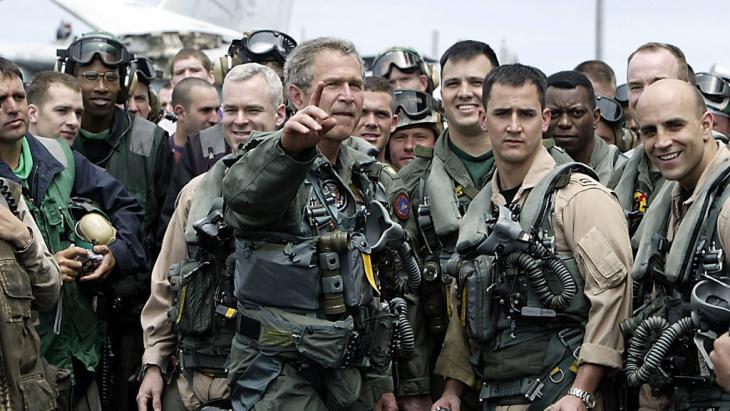 Mission certainly not accomplished: Karim El-Gawhary says that US foreign policy in the Middle East over the past decade has been a failure: instead of leaving behind a stable and peaceful Iraq, the country looks set to disintegrate and IS is posing a threat to people in several countries across the region

Despite being the world's largest military intervention power, the US has not managed to alter the balance of power in the region in its favour over the last decade. Now the regional and local balances of power are catching up on the US. More than a decade after America's neo-conservatives flexed the country's military muscles and exerted political pressure in an attempt to shape the Middle East they way they wanted it, the region has changed to such an extent that not just the US but also the Europeans are being forced to reconsider their entire regional strategies and alliances.

Halting the advance of Islamic State jihadists in Iraq and Syria is not something that can be accomplished in just a few weeks. Pushed back in one place, the terror militias appear in another. Moreover, the whole scenario is not an exotic problem far from Europe: the foreign fighters recruited by IS will return to their home nations not only within the region itself but also in Europe, where they will present a huge security problem that could potentially put al-Qaida in the shade. But as neither the US nor Europe are prepared to send ground troops to Iraq, the work must be done by others.

The Kurdish "bastion" against IS

In recent weeks, the media have been intent on portraying the Kurdish Peshmerga as a "great bastion" in the fight against IS, and their fighters have latterly been heavily armed by foreign nations. But the Kurdish Peshmerga are anything but the magic formula for combating IS, especially as Kurdish ambitions for the recapture of places beyond Kurdish territories in northern Iraq are likely to be limited. The top priority for the Peshmerga is to secure Kurdish territories. This means they will not stick out their necks for the rest of Iraq, which has never given them anything.

Within this celebrated Kurdish front, there are also partners that the West has thus far avoided at all costs and that are even branded as "terrorists" by Turkey, the EU and the US. In the western section of the front, on the Turkish-Syrian border, it is the fighters from the Kurdish PKK, which has its roots in Turkey, who have shown themselves to be the strongest military opponents of IS.

Yazidi and Christian refugees in camps on safe Kurdish territory are falling over themselves to praise the PKK and its Syrian partners, the PYD, who rescued them from the hands of IS. So it is not surprising that the PKK has called on the German government and other western nations to supply weapons to PKK fighters in Syria and Iraq too. IS can only be vanquished if "those forces that put up the most effective resistance to the terrorist group are equipped with weapons," says Cemil Bayik, deputy leader of the PKK's political wing.

In north-western Iraq, the most effective force opposing IS is a group branded as "terrorist" by Europe; in the north-east, it has latterly been soldiers dispatched by the "rogue state" Iran who are supporting the Kurds there. The western concept of who is friend and who is foe is being turned on its head.

The dissolution of national borders: not only has IS gained control of swathes of land in both Syria and Iraq, Iranian forces recently crossed the border into northern Iraq to help the Kurdish Peshmerga fight the jihadists

Damascus not a viable partner

Decisions must also be made in Syria. The IS stronghold is located in the province of Raqqa. In effect, the border between Syria and Iraq no longer exists. To put up effective military resistance to IS, its Syrian retreat must also be taken into account. There are two potential partners for a military strike on the IS stronghold: the Syrian regime or moderate Syrian rebel groups already fighting IS.

The Syrian regime is repeatedly accused of fostering the growth of the IS movement, using it as a counterweight to the other rebels and as a way of showing that the Syrian opposition consists solely of radical holy warriors, thereby discrediting the rebel movement as a whole at international level. This means that areas controlled by IS militia are subjected to fewer bombing raids by the Syrian regime. Assad is even buying oil from sources currently controlled by radical Islamists.

This double game hardly makes Damascus a viable partner for the West. Nevertheless, it is highly conceivable that Assad will attempt to do business with the West on the back of the conflict with IS in order to maintain his grip on power.

Although it is also certain that Syrian rebels have indeed been infiltrated by radical Islamists, other rebel groups have also increasingly been fighting against IS militia since last summer. However, in order to support the rebels in their fight against IS, the US and Europe will have to venture into the political and military jungle inhabited by the Syrian rebels. They have to choose between working with the IS-nurturer Assad or a large number of different rebel groups.

From enemy to ally

And finally, we come to the Sunnis in Iraq: their clans, as well as members of Saddam's former military and political cadre, who are still firmly anchored in Sunni society, are seen as the key to pulling the Sunni carpet out from under the IS jihadists. Nevertheless, members of Saddam's old inner circle are certainly not top of the West's list when it comes to choosing alliance partners.

The West is already telling the government in Baghdad that its radical de-Ba'athification policies, or the ridding of all political institutions of representatives of Saddam's old ruling party, were a mistake. Such a claim frequently overlooks the fact that until recently, this was right in line with US occupation policy. 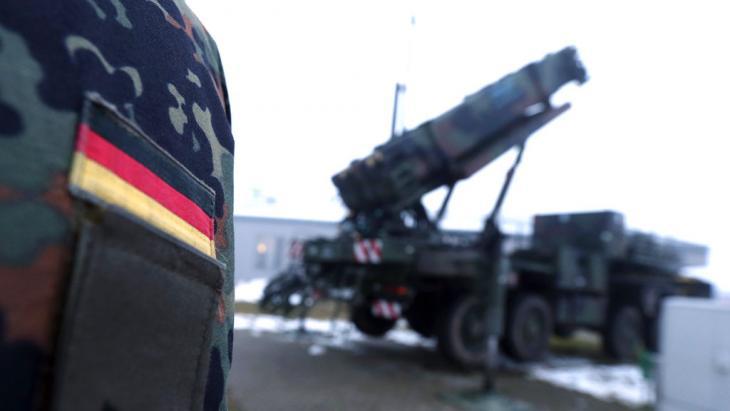 German military support for the Kurds: on 1 September 2014, the German parliament will convene to debate the issue of arms shipments to the Kurds. The final decision will, however, rest with the government alone. On 20 August, the German cabinet announced that it planned to approve arms deliveries to Iraqi Kurds

And what of the Sunni clans? Following years of bloody resistance to US occupation, neglect and political exclusion by the central government in Baghdad, it will not be easy to win back their trust. On the one occasion when Sunni clans did co-operate with US troops and the government in Baghdad to cleanse their territories of al-Qaida, they were politically and economically abandoned the moment the job was done. Why should they enter into another alliance with Baghdad and the West after being so bitterly disappointed once before?

From rogue nations to partners

In addition, the other alliance partners in the battle against IS – whether it be the Kurds, who for years have been wrangling with the Sunnis over territory, or the official Iraqi army, which is dominated by Shias – have all always opposed Sunni ambitions in Iraq. Hardly the best prerequisites for alliances on the battlefield.

As far as alliances in the Middle East are concerned, the cards are being reshuffled. Rogue nations are turning into partners, former avowed terrorist organisations are becoming allied fighters, and the Syrian quagmire – that, it was hoped, could be ignored – must now be made passable after all.

And all the while, the West is still counting on being able to win the support of the Sunnis, whom they left hanging out to dry in the Iraqi sun for many years, for the fight against IS militia.

History is currently being written in the Middle East – although it is not quite the story that the US and Europe had imagined for the region.

Home
Print
Newsletter
More on this topic
The Middle East policies of Europe and the US: Mistakes must not be repeatedIraqi crisis: The expected death of a nationIraqi crisis: A UN protection force, not arms shipments
Related Topics
Assad regime, Iraq War, 'Islamic State' | IS, Islam and the West, Jihadism | Jihadists, Nouri al-Maliki, Sunni Muslims | Sunni Islam, Sunni-Shia tension
All Topics

Unauthorised immigration to Europe went down at the peak of the pandemic. As EU countries re-open, migrant flows are back up. What does it mean for the EU – and for migrants? By ... END_OF_DOCUMENT_TOKEN_TO_BE_REPLACED

Religions are often a source of conflict. But the worldwide Religions for Peace movement seeks to change that by galvanising interreligious dialogue. Delegates from 90 countries ... END_OF_DOCUMENT_TOKEN_TO_BE_REPLACED

Berlin's annual Human Rights Film Festival closed at the weekend. One entry to the festival was the documentary "Captains of Zaatari". Its Egyptian director Ali El Arabi focuses ... END_OF_DOCUMENT_TOKEN_TO_BE_REPLACED

The world must take action now to prevent a deep and lasting humanitarian crisis in Afghanistan. But what, if anything, can be done? The one billion dollars pledged by ... END_OF_DOCUMENT_TOKEN_TO_BE_REPLACED

Germany's foreign policy is explicitly values-based. But what happens, Ralf Bosen asks, when democracy, the rule of law and human rights collide with the logic of trade and ... END_OF_DOCUMENT_TOKEN_TO_BE_REPLACED

Comments for this article: My enemy's enemy is my friend

The idea of post 9/11 action was not oil or any other financial interest as most, especially Arab media,Arab writers, and their supporters with devilish intension would like to describe it to please their listeners and their readers. Not even occupying another land at all since the US is not in this kind of business. The mission of our action was simply to re-export terror back to its merchants; it was mission accomplished.

END_OF_DOCUMENT_TOKEN_TO_BE_REPLACED
Social media
and networks
Subscribe to our
newsletter