Russia's Muslim community has been largely viewed through the prism of the Chechen war, despite its diversity reflecting the trajectory of both Islam's spread in Russia and Russia's imperial expansion into the Muslim lands. By Shireen Hunter 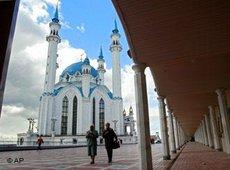 Due to a resurgence of Russian mono-culturism, Muslims are still at the margins of Russian public life - Qol Sharif mosque in Kazan, Tatarstan

​​In the past ten years the question of Russia's Muslim communities and the dynamics operating within them has been largely viewed through the prism of the Chechen war and the violence and acts of terror that it has generated.

Yet, Russia's Muslim community is characterized by ethnic, linguistic, socio-economic and cultural and ideological diversity, reflecting the history of Islam in Russia.

It is difficult to establish exactly when Islam appeared in Russia because the lands that Islam penetrated early in its expansion were not part of Russia at the time, but later were incorporated into the expanding Russian empire. For example, Islam appeared in the Caucasus by the 7th century CE. There are also archeological evidence of links between the people of Bashkortostan located in contemporary Russia's Ural Mountains region and the Islamic world dating back to the 8th century CE.

By the 10th century, the Bulgar kingdom on the banks of the Volga River had accepted Islam and had incorporated Bashkortostan into its domain. In fact, if some legends are to be believed, Islam arrived in parts of what is now the Russian federation before Christianity.

The Development of a flourishing Islamic state

Mongol Invasion of Russia in 13th century CE and its defeat of the Kievan Russia followed by the adoption of Islam by Ozbek Khan of the Golden Horde in the early 14th century led to the development of a flourishing Islamic state and the expansion of the Islamic civilization.

The entry of Islam had a significant impact on the future development of the post-Kievan Russian state as well as the formation of the Russian national identity and its perception of Islam, thus influencing the character of Russian-Muslim relations for century's to come.

To sum up, because of the identification of Islam in Russian minds with Tatar domination, the Russians came to view Islam and Muslims as an enemy, and when had the opportunity try on the one hand to eliminate its influence through a process of proselytization and limitation of Muslim religious and cultural activities and a drive to conquer Muslim lands on the Russia's borders.

Russian treatment of its Muslims: a historical overview

A watershed event in the history of Russia's relations with Muslims was the conquest of Kazan, the present-day capital of Tatarstan, by Ivan the Terrible in 1552 CE. The memory of this event is alive today and influences the character of relations between the Tatars and the Russians; the Russians celebrate their victory over the Tatars while the Tatars mourn it.

The conquest of Kazan was accompanied by a great deal of destruction both physical and cultural. The period between the conquest of Kazan and coming to power of Empress Catherine the Great in 1762 Russian policy toward its Muslims was marked by systematic repression and the destruction of Islamic civilization within Russia's borders. The result of this policy was large-scale exodus of Tatars to Central Asia and the Ottoman Empire.

Catherine the Great to a considerable extent changed this policy, and adopted a more tolerant policy toward the Muslims. For example Catherine prohibited Christian proselytizing and the destruction of the mosques. Catherine's strategy was to coopt her Muslim subjects, especially the clerical establishment.

It was under Catherine that the first official Muslim institution was created in Ufa, the current capital of the republic of Bashkortostan. With variations over time this basic strategy has been followed until today.

This relative tolerance, albeit with ups and downs, enabled Muslim religion and civilization to survive in Russia, even if in a weakened state. The persistence Muslim identity in the early 20th century led to Muslim demands for greater autonomy and cultural and political rights.

Initially the Bolshevik Revolution of 1917 created high hopes among the Muslims for grater autonomy and even independence. These hopes were encouraged by Vladimir Lenin who, in order to gain Muslim support in his struggle against the White Russians, made them all kinds of promises of freedom.

These promises, however, were soon forgotten, and the Muslims suffered even a worse fate under the Communist regime. Anti-religion, especially anti-Muslim campaigns of the Soviet leadership decimated Muslims' religious, educational, and cultural institutions, and led to their intellectual stagnation.

However, foreign policy objectives of the Soviet government, notably its desire to gain the Muslim governments goodwill in its competition with the West led to periodic softening of attitudes toward its Muslim populations. This situation, coupled with the fact that Islam constitutes such an important component of the Russian Muslims' identity and culture led to its survival and eventual revival

By the time Mikhail Gorbachev began his reforms in 1987, Russia had not succeeded in eliminating the influence of Islam among its Muslim populations. On the contrary, certain Islamic practices had survived even among the high-ranking members of the Communist nomenclature.

In addition to the factors discussed earlier, the Afghan war had done much to revive Islamic consciousness among Russian Muslims.

The greater political openness provided by Gorbachev's policy of Perestroika and easing of contacts between the Russians and the rest of the world also resulted in revival Muslim political, religious and cultural activism which in the past 17 years has led to the establishment of an expanded albeit still inadequate Islamic religious, educational, cultural and political infrastructure.

There is no agreement about the exact number of Muslims in the Russian Federation today. The reasons for this are twofold.

First, there is no agreement on the criteria, which needs to be used to define who is a Muslim. For example some who use strict observance as the criteria put the number of Russian Muslims at only three million.

Second, some Muslims and Russians for totally different reasons tend to inflate the number Muslims as high as 30 million, which is equally unrealistic. The more realistic estimates put the number of Russian Muslims between 16 to 20 million, with the latter number closer to the mark.

However, the percentage of the Muslims in Russia's total population is likely to increase in the coming decades because of the higher birth rate among the Muslims. This will be especially the case if the Russian birth rate continues to fall.

Today Muslims are to be found in all of the Russian Federation's eighty-nine territorial divisions, including some of the most remote areas, such as the Kamchatka Peninsula. There is large concentration of Muslims in Russia's two largest cities, Moscow and St. Petersburg, with a combined population estimated between two to three million.

However, the largest concentration of Muslims is in the Volga-Ural region and the North Caucasus; major centers of Muslim concentration are the republics of Tatarstan, Bashkortostan, Chechnya, Dagestan, Ingushetia, Kabardino-Balkaria, and Karachaevo-, Cherkessia.

Compared to the rest of the population of the Russian Federation, Muslims are in an economically less advantageous position. The situation is particularly bad in the North Caucasus. For example the level of poverty in the North Caucasus is twice that of the rest of Russia and the income levels barely half that of Russia. Unemployment is also extremely high in this region. Moreover, Muslims are employed mostly in the unskilled labor category, including a variety of low paying agricultural jobs.

Socially Muslims have made significant progress especially by creating a large number of religious, educational, cultural and media-related institutions as well as charitable institutions.

For example as of 2001 there were close to 4,000 mosques in the Russian Federation, albeit many of small size and without dome or minaret. However, in some areas resistance to the building of new mosques was increasing, illustrating a shift in Russian attitudes toward mono-culturism.

Following the end of the Soviet Union there was a trend toward fragmentation of the Muslim religious establishment and rivalry among key Muslim leaders. This situation has enabled the Russian government to exert control over key Muslim religious organizations.

Muslims at the margin of Russian public life

Despite advances made Muslims are still at the margins of Russia's social and cultural life.

Politically, too, the Russian Muslims have not been able to organize themselves effectively and have failed to become a force that other Russian political forces have to reckon with. Several reasons account for this situation, the most important of which are the following:

Divisions within the ranks of the Muslims ranging from ethnic to ideological. These divisions contributed to the poor performance Muslim parties such as UMR (the Union of Muslims of Russia) and the All-Russia Muslim Social Movement, known as NUR, during the 1995 Parliamentary elections when the atmosphere for Muslim political activity was more positive.

The other factor has been the gradual narrowing of political space in Russia and new electoral laws that have made the establishment of a viable Muslim political party impossible.

The majority of Russian Muslims adhere to the Hanafi school, except those in Dagestan who follow the Maleki school. However, for a variety of reasons, including the erosion of the intellectual base of Russian Islam as a result of the Soviet policies, other Islamic traditions not indigenous to Russia, such as variations of the Salafi and Wahhabi tendencies, have gained influence in Russia.

In the North Caucasus a combination of social and economic deprivation and the fallouts of the Chechen conflict have led to the emergence of extremist groups, some of which have taken part in terrorist activities.

However, it is important to note that most of these groups, especially those originating from Chechnya, are motivated by ethnic grievances, desire for independence and revenge rather than by any particular Islamically-based ideology.

Islam in Russia is not a new phenomenon. Rather in certain parts of Russia Islam predates the arrival of Christianity. Islam has had a turbulent history in Russia and its survival testifies the resilience of Islam and the fact that it constitutes an important element of individual and collective identity of Russian Muslims, even those who are not observant.

The post-Soviet environment offered opportunities for a comprehensive revival of Islam. However, since the late 1990's the gradual process toward political centralization and cultural justification has put under question some Muslim gains. Particularly disturbing has been the rise in Islamophobic tendencies.

The future of Russia's Muslims, particularly the question of whether they will become full and equal participants in Russia's social, cultural and political life, will depend on the overall direction of Russia – namely whether it will pursue a democratic route or revert to more authoritarian tendencies.

Equally important will be the ability of Russian Muslims to coalesce around a progressive Islam and become fully engaged in the country's life. However, in doing so, segments of Russia's Muslims have to overcome horrendous economic and social difficulties.

​​Shireen Hunter is the director of the Islam Program at Center for Strategic and International Studies (CSIS), Washington. She previously served as a guest scholar at the Brookings Institution, and research fellow at the Harvard Center for International Affairs. Hunter is the author of many books, including "Islam in Russia".

Muslims in Russia
Tragically Torn Between Two Loyalties
In an attempt to fight further marginalisation of their communities, Muslim religious leaders increasingly pledge their support to hard-handed President Putin – in vain, it seems, as Svenja Üing and Ruth Dickhoven report.

www
Islam Program at the CSIS

END_OF_DOCUMENT_TOKEN_TO_BE_REPLACED
Social media
and networks
Subscribe to our
newsletter