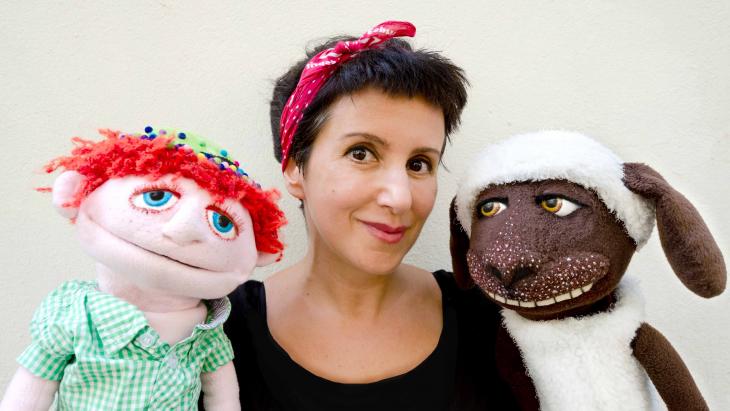 With her puppet theatre "Bubales“, the artist Shlomit Tripp gives audiences a light-hearted taste of Jewish life in a bid to build bridges between religions and cultures. She was presented with the Obermayer Award for her work in January. Ceyda Nurtsch met her and her cast of colourful characters

When Shlomit Tripp sets up her mobile puppet theatre, snaps on the spotlights and gives the stage over to her loveable troupe of vibrant puppets, people laugh, sing and learn a lot – about traditions and commonalities, about friendship and delicious food. At the heart of her "Bubales“ stories is Shlomo, an eight-year-old Jewish boy with fiery red hair, who wants to know everything about everything. "Why do we always eat these greasy latkes, Dad?" or "What language does your Mum speak with you, Ayse?" Ayse is Shlomo’s best friend, a Muslim and true native of Kreuzberg with a rasping voice and a big heart.

Other characters include Mama and Papa Lotterstein, Shlomo’s parents, his brother Miki, Rabbi Blumenberg and many more such as Mendel, the humourless sheep. They are all "Bubales" – a word coined from the Hebrew "buba" or "doll" and the Yiddish "bubele" for little darling. The art educator Shlomit Tripp has been touring Germany with the "Bubales" since 2011, immersing both adults and children, both Jewish and non-Jewish, in the world of Jewish tradition and vibrant co-existence, through stories that are both witty and profoundly humane.

It all began when Jewish parents approached her to point out that their children were barely interested in Hanukkah, the Jewish festival of lights, celebrated at the same time as Christmas. This was hardly surprising in view of all the lovely seasonal events for Christian children such as puppet shows, with nothing comparable for Jewish children, recalls Shlomit Tripp, who studied at Berlin’s University of the Arts and now works to develop the educational programme at the city’s Jewish Museum. The pilot project launched in response, a Hanukkah puppet theatre, was a huge success. 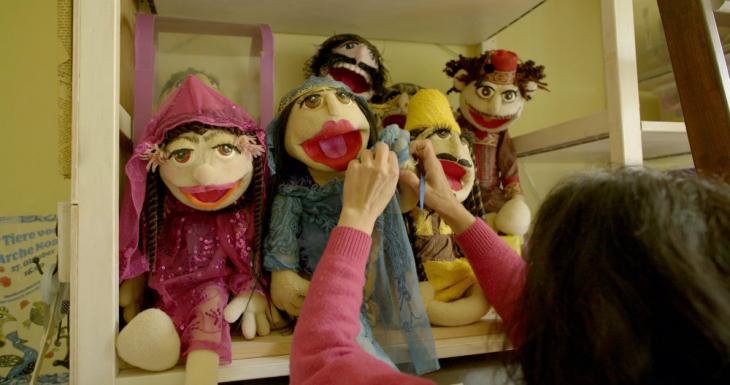 Cheerful, funny, but also thoughtful topics make up the puppet theatre "Bubales" by Shlomit Tripp. Her puppets have a lot of guts. The colours are bright, the eyes big, the eyebrows strong and Mama Lotterstein, with her bright red lipstick, her cleavage and her pearl necklace, is a refreshingly brash Jewish "Mamele". Tripp's audience, in which she brings together people of different ages and backgrounds, thinks this is great. A play on stereotypes? If it's so endearing, why not

The shows were all sell-outs; also sparking interest within non-Jewish organisations and families. But the crucial moment was yet to come. During one of her tours of the Jewish Museum, she asked primary school children what they associated with Jewishness. "There was a very bad man, he killed all Jews,” came the answer – from a first-grader.

How can normal German-Jewish relations develop if children are growing up with this awareness, she wondered. And found a response herself: with adorable, zesty hand puppets, with bizarre ideas such as a pig that desperately wants to go into a kosher machine, a Shaloemchen railway that travels through the Jewish year explaining Jewish holidays, or a grouse that’s sent from Cologne to Rome. "It’s important that children, when they first come into contact with Judaism, learn something wonderful and light-hearted," says Shlomit Tripp.

"Cultural offerings for children are aimed at the majority society, as far as both content and aesthetics are concerned," the artist has observed. "In illustrations the faces are very northern European, everything is kept neutral, without vivid colours and also rather gender neutral," she says. It’s a style that she respects. But her puppets pack a punch. Their colours are loud, their eyes huge, the eyebrows bushy and with her bright-red lipstick, cleavage and string of pearls, Mama Lotterstein is a refreshingly brash Jewish "Mamele". Her audience, assembled from people of from a wide variety of ages and backgrounds, loves it. A play on stereotypes? If the result is this endearing, why not.

As well as Jewish empowerment, the "Bubales" puppet theatre also aims to inject mutual curiosity and a greater sense of ease into societal co-existence in Germany. Children’s television programmes still report on other cultures from a great distance, says Shlomit Tripp. This is hugely out of kilter when you see school classes in which most of the children don’t celebrate Christmas or Easter, she adds. In a bid to address this imbalance, her fantastical beast Glueckl, a blue Chagall goat, visits families with a variety of migration stories as part of a community project run by Berlin’s Jewish Museum, cooking and baking with them for Chinese or Persian holidays, for example.

Shlomit Tripp’s puppet show continues a Jewish theatrical tradition rooted in what’s known as the "Purim play". In the Biblical story of Esther, Esther reveals her Jewish identity to the Persian King, who has taken her for his wife. In doing so, she succeeds in saving the Jews and securing them a safe and even elevated status in the Persian empire. Portrayals of this story during the annual festival of Purim, which celebrates this salvation, evolved into a theatrical culture along the lines of a carnival tradition in the 16th century. The festival’s message is that life as a Jewish minority within a non-Jewish majority society is possible, without having to surrender Jewish identity. A message echoed by Shlomit Tripp and her "Bubales".

Born in West Berlin, Shlomit Tripp hails from a Sephardic family who lived in Turkey. The artist has lived in various countries since childhood and speaks several languages. All this flows into her puppets, which she designs herself at home and which also sometimes like to speak Arabic, Turkish or Russian. She inherited her creativity and craftsmanship from her mother and grandmother, she says. And her parents gave her something else of great importance. "Tikkun olam", the Jewish ethical principle of repairing the world, of leaving it behind a slightly better place.

The artist receives support from a rotating team of advisers, volunteers and primarily her partner, the 'puppet papa' Gershom Tripp, responsible for technical aspects and video production. In early 2022, "Bubales" was presented with the Obermayer Award for "outstanding commitment to the preservation of Jewish history and for fighting prejudice in the modern era". With her puppet theatre, Shlomit Tripp and her team are performing an invaluable service to society; through the fostering of self-assured, humorous and sincere co-existence in Germany.

Anti-Semitic motifs have no place at Germany’s documenta art show or anywhere else in the world, stresses Meron Mendel, director of the Anne Frank Educational Centre in Frankfurt ... END_OF_DOCUMENT_TOKEN_TO_BE_REPLACED

A new exhibition, "Syria – Against Forgetting", at Cologne’s Rautenstrauch-Joest-Museum focuses on Syria's artistic and cultural heritage and pays tribute to the country before ... END_OF_DOCUMENT_TOKEN_TO_BE_REPLACED

Madrid's about-face on the Western Sahara conflict has enraged Algeria. Trade relations have been frozen unilaterally and a cut in gas supplies to Europe could be in the pipeline ... END_OF_DOCUMENT_TOKEN_TO_BE_REPLACED

Yazan Khalili is spokesman for The Question of Funding, a collective of artists taking part in the leading German contemporary art festival Documenta 15. Here, he responds to ... END_OF_DOCUMENT_TOKEN_TO_BE_REPLACED

Mourad al-Marouai was just nine when a landmine killed him on a beach in war-torn Yemen, a tragedy that will haunt his family forever. After a swim, the little boy "suddenly ... END_OF_DOCUMENT_TOKEN_TO_BE_REPLACED

END_OF_DOCUMENT_TOKEN_TO_BE_REPLACED
Social media
and networks
Subscribe to our
newsletter