Move over, Siegfried. Ahmet is on the way.

A journalists' group gave the name Ahmet to a low pressure system bringing frigid temperatures, dark clouds and snow to Germany on Tuesday in an effort to reflect the country's increasingly diverse population. Ahmet is a boy's name of Turkish origin.

Ahmet will be followed by low pressure systems with traditionally male Arabic, Kurdish and Greek names such as Cemal, Goran, Hakim and Dimitrios. The high pressure systems reaching Germany early this year will be called Bozena, Chana or Dragica, traditionally females names with Polish, Hebrew and South Slavic roots. 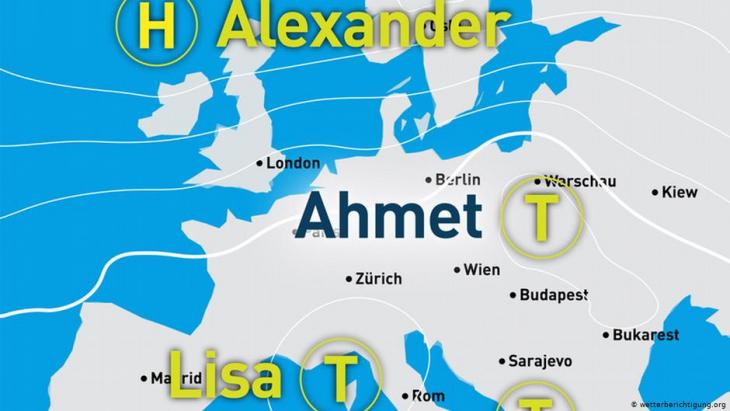 A weather map featuring "Ahmet", a low pressure system. Ahmet is the first of several non-German names that will be used for German weather systems this year

In Germany, naming the systems that affect day-to-day weather changes isn't the sole province of meteorologists. Anyone can participate for a price: naming a sunny high costs 360 euros ($442), while rainy lows cost only 240 euros ($295).

To make the weather more cross-cultural, the New German Media Makers, an association representing journalists with diverse backgrounds, bought a bunch of lows and a few highs for the beginning of the new year, Ferda Ataman, the head of the group told The Associated Press.

"So far, our weather had mostly typical German names only, even though some 26 per cent of people in Germany have migrant roots," said Ataman, whose parents immigrated from Turkey.

The weather-naming project, which the group dubbed #WeatherCorrection, is a symbolic initiative demanding that Germany's diversity is better reflected across society.

The low and high pressure systems will also have plenty of the traditional German names coming up in 2021, including Reinhard, Volker, Margarethe, Trudi and Waltraud.

In the past, cloudy low systems always had traditionally female names and upbeat highs had male name. The practice changed in 1998. Since then, male and female names switch places each year in the high and low categories. (AP)

END_OF_DOCUMENT_TOKEN_TO_BE_REPLACED
Social media
and networks
Subscribe to our
newsletter